Cody Breaking the Tape: How Disabilities Didn’t Stop Him in Life

My name is Michelle Carroll-Piver, and my husband, Dale, and I have four children. My oldest is18 and serving in the US Army stationed at Fort Sam Houston in San Antonio, Texas. Next is Cody, 17, a high school Junior attending the Mahoning County Career and Technical High School studying computer networking and cybersecurity. He is an athlete that wrestles for Canfield High School and is part of the track team as a seated athlete. 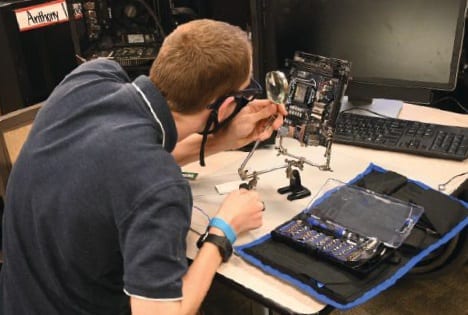 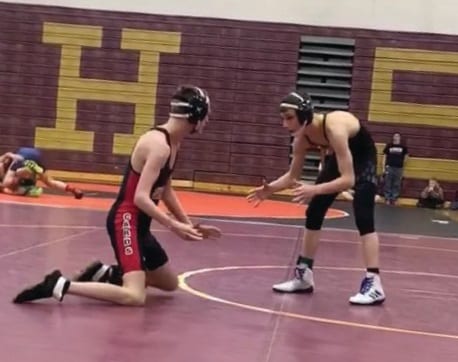 Our daughter, Riley, 14, is a Freshman and cheerleader at Canfield High School. Our baby, Caitlyn, 10, is a 4th grader at CH Cambell in Canfield. As if 4 children isn’t enough, my husband is a retired CSX railroader and a 3-time stroke survivor. 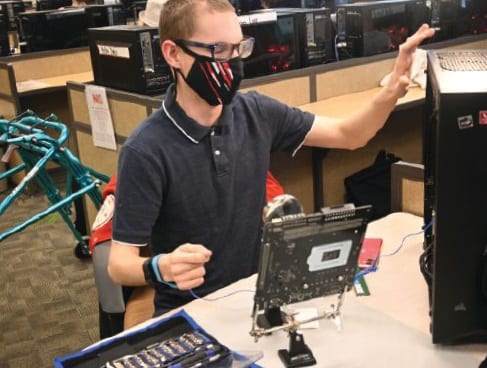 For 15 years, I was a stay-at-home mom and in 2017 I started my undergraduate degree in Sociology and Political Science. I graduate with my degree this May, and the plan to go to law school. I work part-time at Someplace Safe in Warren as a legal advocate for victims of domestic violence. I also sometimes work in the shelter with those who need a safe place to live while rebuilding their lives after domestic violence. 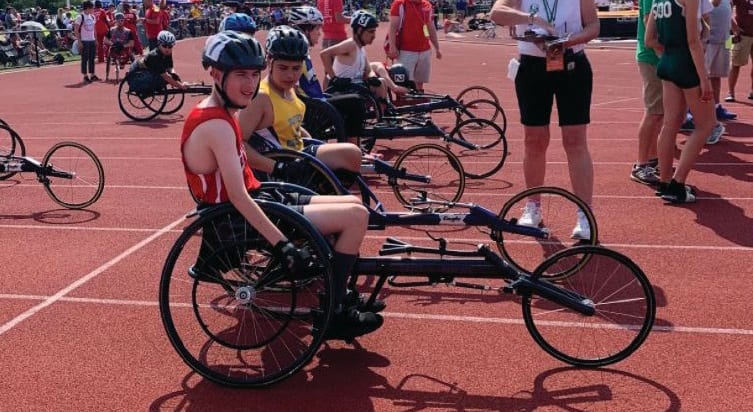 In 2003, Cody was born and weighed only 2 pounds. As a result, he had a brain bleed, which led to all his diagnosis. He has autism, cerebral palsy, right-sided hemiplegia, and has hydrocephalus, which is fluid build-up around the brain. He has a shunt that helps to drain it from his brain to his belly. 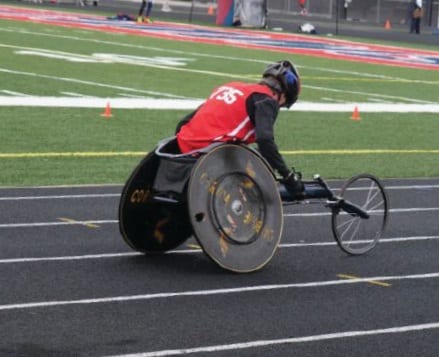 When he was born, we had a WHOLE world of “unknowns”. Information seemed to be coming at us from a lot of people. Moreover, doctors talked in statistics, using generic and cold terms. I was 22….it was overwhelming. When he was about a week old, he was diagnosed with brain bleed while in the NICU at Loyola University Hospital in Chicago. On the day that he had his head ultrasound, we were called and told that the issue was severe we needed to come in to discuss the results. The Resident Dr. drew us pictures, showed us photos, and at one point, he asked if we wanted to sign a DNR. I was floored. Again, I was 22 and all I could do was cry. I put my finger inside his hand, and his fingers couldn’t even wrap all the way around my finger…he was so small. I kissed him on the cheek, and I whispered that “hey buddy, I want you to know that if you can’t fight anymore, I understand, but if you want to fight, I will be right there fighting with you all the way.” I am not exaggerating when I say he turned his head, which was facing opposite of me, and he opened his eye just a little bit. It was all the validation I needed. Doctors told me it was a reflex, and I said that even if it were, that did not mean I could “play God”, and neither could they.

When we went home, he was on oxygen for several months. There was therapy 5 days a week, nursing care, etc…As he grew and hit milestones, he then had PT 4 days a week, OT 3 days a week, and speech therapy twice a week – all at the house. It was very intense, but, it ALL helped.

At 2 years of age, Cody started using assistive technology. When he was 3, we started to explore a new (at the time) surgery called a Selective Dorsal Rhizotomy. This surgery was a game-changer. Cody was able to move his legs without spasticity, and his speech improved overnight. Literally, when he woke up from surgery, he used a full sentence for the first time, “mom, I want drink.” Before that, it was one, maybe two, word communications. This surgery also saved him from having to have many hip surgeries and allowed him to learn to walk. By the time he was 8 years old, he had his first experience with adaptive sports.

I got a flyer for wheelchair basketball for the Chicago Bulls, and at first, I rolled my eyes. I knew absolutely NOTHING about wheelchair sports. But Benny the Bull would be there, and I thought I had nothing to lose by taking my family and letting Cody experience it. BEST DECISION EVER. We threw ourselves into all things wheelchair basketball.

We later moved to Cleveland and lived a mile from Youth Challenge. This organization provided free transportation to the kids involved, and promoted activities and sports in para-Olympic style.

Related: Special Olympics Success and Encouragement for All!

Cody got his first taste of weightlifting, adapted soccer, adapted swimming, and even got to attend a Brown’s game and met some of the players.

As fate would have it, we moved to Mahoning Valley (Youngstown area of Ohio). For a while, we couldn’t find anything for him to do. Then one year he went to a program after school at Canfield Village Middle School for Taekwondo. He got hooked on it; the more I learned about it, the more I liked it. It was a way for Cody to incorporate strength training, focus, and balance into an activity he enjoyed. He soon got involved in competitions and eventually became a National Champion for his age group in Poomsae (forms).

He asked to wrestle, and the varsity coach made it happen. Freshman year, he also joined the track team (in Ohio, high schools work with ASPO to allow seated athletes to be part of their school teams). Cody competes in the 100 yead and 200-yard events at school. He made “States” his Freshman year and was already on track to make “States” his sophomore year before the season was canceled due to COVID 19.

This year he is at MCCTC learning networking and cybersecurity. He does very well and has passed many certifications already. He participates in Business Professionals of America, which holds competitions for business practices, help desk, networking, etc. He is on track to make State and possibly Nationals in business and help desk. Last year he also started the speech and debate team at Canfield High School. He writes speeches about ableism and inequality in sports and other areas.

Everyone who meets Cody agrees that he is funny, dedicated, and rarely gives up. He has dreams of being in the Army, and he hopes that by studying cybersecurity and networking, he might contract with the Army someday to help defend his country with his computer.

What is your biggest academic goal for this year?

To get all of my Cybersecurity and networking certifications done and potentially get all of my credential points that are needed to graduate (12 points required to graduate). Then, to take the CompTIA A+ exam at the end of senior year (it’s a really hard exam, that we don’t have to take, but I want a challenge)

How did you set your goals for your track success?

Who helps motivate you?

My brother, mom, my track coaches, and my wrestling coach, Stephen Pitts.

Any other goals for this year?

How do you plan and set your personal goals?

What makes you stay committed and accountable to the goals you’ve set?

Do you have a quote or something that fuels or motivates you?

Freshman year in track, we were fortunate that some teachers, therapists, and moms let me know that seated events existed. We contacted ASPO, signed him up, and honestly, we got so lucky with those coaches, too. Cody was only the second seated athlete for Canfield and was only one of a handful in the county.

Cody set a goal to stay in his lane and make it across the finish line. We did not expect much more than that before day 1. Being diagnosed with right-sided hemiplegia means that he doesn’t have the same strength or movement in both arms. When you have to be straight in a lane and must move fast, it’s an obstacle. But he did REALLY well that first week of practice. His goal was to make the 100 meter in less than a minute; he hit that within the first month. He looked online to see what the threshold for making state was: 40 seconds was the magic number, and he set that goal.

For any runner, things like the wind, the firmness of the track, and nutrition make all the difference in events; it does for Cody as well. Track chairs are not small, and tires sink into a squishy track, and there is nothing you can do to change it. So he does a LOT of upper body strengthening, and wrestling helps that. He plans all year round for track season. In his Freshman year, only two athletes from track made it to state, and he was one of the two! So track has given him a particular niche in life. Something that he can get scholarships for and puts him on a level playing field as other athletes. His options for schools with adaptive sports is smaller than most athletes, but the goal still exists. And like anything else, we will do what we have to do to take reasonable steps to get there.

Cody never wants to be “an inspiration,” he just wants to be a kid. He takes his training and his accomplishments seriously. He understands that he does have the duty to be a good role model, but his role isn’t any larger than any other peer. Last year, his speech was about how the Paralympics isn’t celebrated or televised or given the same TV time as the traditional Olympics. I used to take Cody back to the NICU to visit the doctors who almost gave up on him because they said he’d have a poor quality of life. If this is poor quality, I’d be interested in what good quality is.

Life is what you make it, and that doesn’t change just because there is an obstacle. No matter the disability, delay, impairment, joy can be found. I’ve met so many people in the special needs community, and I have never met a parent who said their child has a poor quality of life.

Celebrate Cody because he’s a great kid, because he tries hard, he pushes himself, and challenges himself.

This year was eye-opening because I realized that I didn’t have a little boy anymore. I had a young man. He wants to do things like all other 17-year-olds. I’ve had to realize that he’s growing up. He has a girlfriend, he has friends, and he has goals. The barriers that I think exist for him – well, he doesn’t necessarily agree with me. He does get lonely, and he wishes he could better relate to his typical peers. When he is with neurodiverse teens, it’s his normal. I just wish he could experience that more. MCCTC has changed his life. They allow him to be him. He isn’t a square peg there; he’s just another kid. I never hear “he can’t” or “we don’t think that’s a good idea.” They say, “how can we accomplish this?”

Cody passed a college writing course this year. At CHS, when I mentioned college, I got looks of confusion. When I was young, Tech schools were for kids with major behavior issues, major academic issues, etc… MCCTC has changed that perception, and I am thankful that. I still worry long term, but I have seen this year that he will be okay. And that’s the best a-ha moment EVER!