Joshua’s Success Story: The Words I Didn’t Want To Hear

Some times, I am still stunned where he is in life. I watched as Joshua opened up his recent book order from Penn State University (he ’s in their online Applied Statistics program trying to obtain his Masters of Science degree), he eagerly gets ahead on his optional reading. It’s how he accomplishes what he does. Still, I think back on how we got here; it was not an easy road.

Joshua was born prematurely after a very difficult pregnancy. I had early placental failure and had ultrasounds every other day to try to garner as much fetal maturity as possible before my placenta completely failed. At 34 weeks, Joshua was delivered weighing 4 pounds and 11 ounces. His little cries and squawks were music to my mother’s ears. Then came the words I didn’t want to hear. The doctors came into my room and as quickly as my joy had arrived, they told me everything that was “wrong” with Joshua.

I remember feeling like my heart had been ripped out. They were saying things like, “brain damage”, “oxygen depletion”, “birth defects”, and “syndrome” . As a young mother, I tried to take all of it in. I cried, I prayed, and ultimately I found an answer from God, “Love him the way he is” . That was my answer and that answer would be applied over and over and over throughout his life.

Over the years, we would get a diagnosis or observation here and there: FG Syndrome, atypical seizures, PVL, movement disorder (palsy), syringomyelia, von Willebrand’s Disease, Ehler’s Danlos Syndrome, ASD, hypotonia, and a myriad of birth defects and systemic issues, many of which needed surgical intervention. 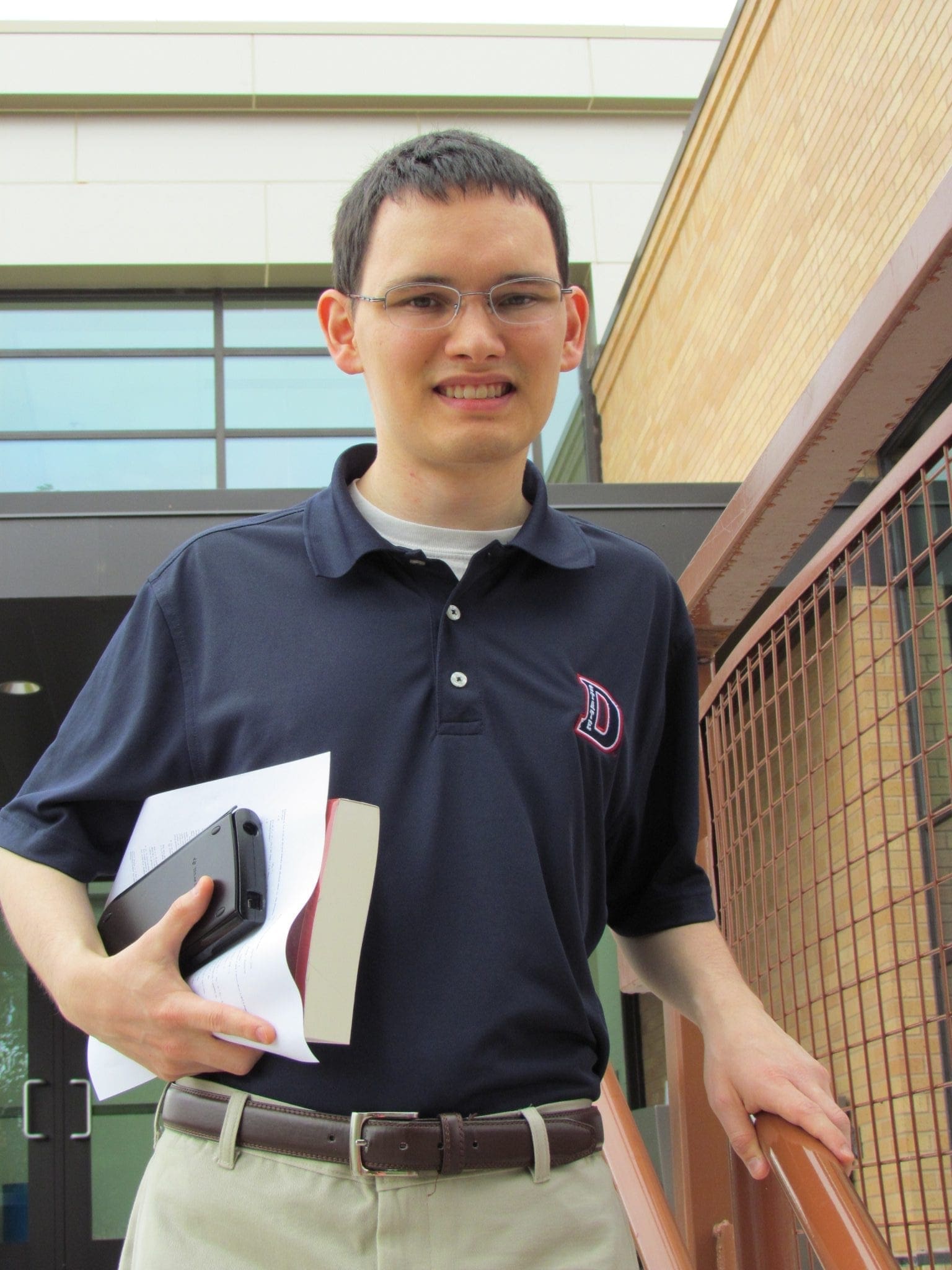 I think the hardest diagnosis of all was the one termed, “Failure to Thrive” . I remember how that felt so utterly devastating to me, as though Joshua didn’t want to do well in life. It felt so judgmental as a diagnosis. I knew it meant he was undersized and not meeting benchmarks for progress like eating, walking, or talking.

Sure, he was slower to walk; he didn’t do so until nearly 2 years old. However, we took great joy in his rolling underneath our bed and playing his own game of “tag” as he would turn over out of my reach. Joy was always in the moment and never measured by what was “typical” .

The hardest thing for us was not hearing him speak. We did years of therapy and I always cringed on testing days which showed him “profoundly delayed” in speech. I just prayed to God that somehow, someway he could just say, “Mom” and “Dad” . He was so frustrated by the inability to speak. We tried to just communicate in our own way and for Joshua that meant blinking yes and no; it meant asserting his wishes by actions; it meant an afternoon of reading time. He would go and get his favorite book and bring it to me to read. One day I fell asleep after reading the same book 4 weeks in a row. As I was reciting the poem and nodded off…l heard a little voice by my head recite the end of the sentence. I was sure I was dreaming. I wasn’t. I pretended to sleep over and over and over and with the same results. The rhythm and cadence of that special book brought his speech out and I cannot explain it other than a pure miracle!

We learned through his acquisition of speech that he could also read already, which was amazing to us. All of that knowledge had been locked behind a world of silence. Oh, how we wished sign language had been an option presented to us back then!

We had higher hopes that we could possibly put him in school. I knew we would need to obtain an IEP and deal with any sensory issues that might arise. His teacher was amazing! The staff was wonderful, however, Joshua was not “thriving” . That same word was describing our experience yet again. After months of trying to get past severe sensory overload, it was suggested that maybe we should home-school him. It doesn’t take long after relating this experience before friends gasp that we were not offered more options. I do not think the school meant to be, in any way, unkind towards Joshua. They were looking at our whole family and the medical and surgical needs presenting and tried to find the best option.

It sounded OK, but I cried a lot during this time. I felt so completely overwhelmed. I didn’t know how to do a home-schooling program. I decided to dig in and bought little desks and chairs and soon realized why a regular classroom setting didn’t work. I was modeling our schooling after what was typical and it didn’t work for Joshua.

He was often on the floor or walking around. He was always thinking. I often joked that life with his syndrome was about “dealing with the attention span of a gnat”. Truly it was short! We learned to just follow his lead in learning. We went wherever his interests took him. We would visit factories and learn how things were made. We would study dinosaurs or ancient languages. The subjects would vary season by season.

It wasn’t until the age of 15 that we even had any idea that mathematics was Joshua’s real educational “gift” . We tried to teach our children to find their niche. That’s a big statement in our home, “Find your niche!” We believe each child is blessed with certain amazing gifts and talents to enrich their lives, homes, and communities in which they live.

We decided to try some upper level mathematics like algebra just to see how his mechanical mind would take to those concepts. We used some amazing DVD programs and suddenly his mind just opened to the world of math. He wanted more and more information. After just a year, he was able to take a college entrance exam and score super high in mathematics. It was enough at age 16 to gain entrance into a small junior college in Southern Nevada. They allowed high school age young people to take classes via an online program and at a discounted rate and get full college credit if they performed well.

Joshua did that! He started with just one class at a time and then he started talking more credits per semester as the college requirements were more comfortable for him. Soon he had enough credits to attempt to apply to a larger school. He was accepted and offered a scholarship in a science related field.

To say we were thrilled would be an understatement! He went to his first day on campus, and while there collapsed physically and emotionally. An MRI would show a syrinx in his thoracic spine that very week. That explained the physical element. Overwhelmed emotionally by all the sensory input of a busy campus environment, he didn’t feel there was really any way to attend the university as a typical student.

Learning Is About Progress

I remember that fateful call to the university to respectfully decline the scholarship. I went into my room and quietly wept. I knew how much he wanted that education! When I composed myself, I came out to meet my wise son, who said, “I just want to make progress in my learning…”

His words touched my heart. He was seeing this in a very different way. Learning was about progress, not those same “typical” milestones that had tortured us earlier in life.

During the next few months my mind would consider possibilities for accommodation. Finally I asked the school if it would be possible for the science center to do a live video (like a Skype call) for his class session. Given that he was studying Computer Science, I assumed they would know the technologies we could use. The professors were willing to give it a try and the next fall Joshua received his scholarship again and he attended his classes from home. It worked beautifully well. We could deal with both the physical difficulties and the emotional ones all from one simple accommodation.

The school graciously agreed to attempt to continue the accommodation into his second Bachelors of Science. He absolutely needed a mathematics degree to continue on in the educational progress he desired. This time, they hired students to video tape the classes and he would later watch them as the videos were downloaded. He learned to try to get ahead as much as possible on homework to compensate. Two more years of this accommodation lead to receiving a degree in his beloved mathematics.

Joshua often says he feels this video-recording of all class sessions could be the solution for many students with varying educational difficulties, as students could watch the sessions over and over and work with their issues. He hopes in time all schools will have classroom cameras to help aid students who are either sick or struggling to be a part of their classroom setting. Online blackboard sessions with other students helped to give him that necessary peer feedback and support he needed to “thrive” .

Did I say that word? He THRIVED! What did it take? Well, it took an awesome college accommodation for starters, and an attitude of making progress step by hard step. I credit Joshua for getting where he is by simply taking one little bit at a time and finding his own personal niche. What’s the old joke how do you eat an elephant?….One bite at a time!

Joshua is amazing! All children with differing needs are amazing! Every child just needs to be given some room to explore their talents and find their personal gifts. The best thing I did as a parent was to throw the world’s yardstick away and measure our success one little step by one little step. I took to heart that advice from God to just love my child the way he was! Success wasn’t having Joshua graduate from college; success was having him become what he wanted to be. It will be a fun journey to see what that will be as he progresses and thrives!

Diane, thank you for sharing with us.

The Heart of Dixie award is presented to a student w ho has faced and overcome significant personal obstacles and yet found the strength and ability to succeed in their educational pursuits. The candidates are nominated by the cam pus com m unity and then nominees are contacted and asked to answer questions specific to their category. These materials are then review ed and narrow ed to a field of five finalists by a preliminary screening committee. The materials from the five finalists are then given to a head judge and committee who select the winner. 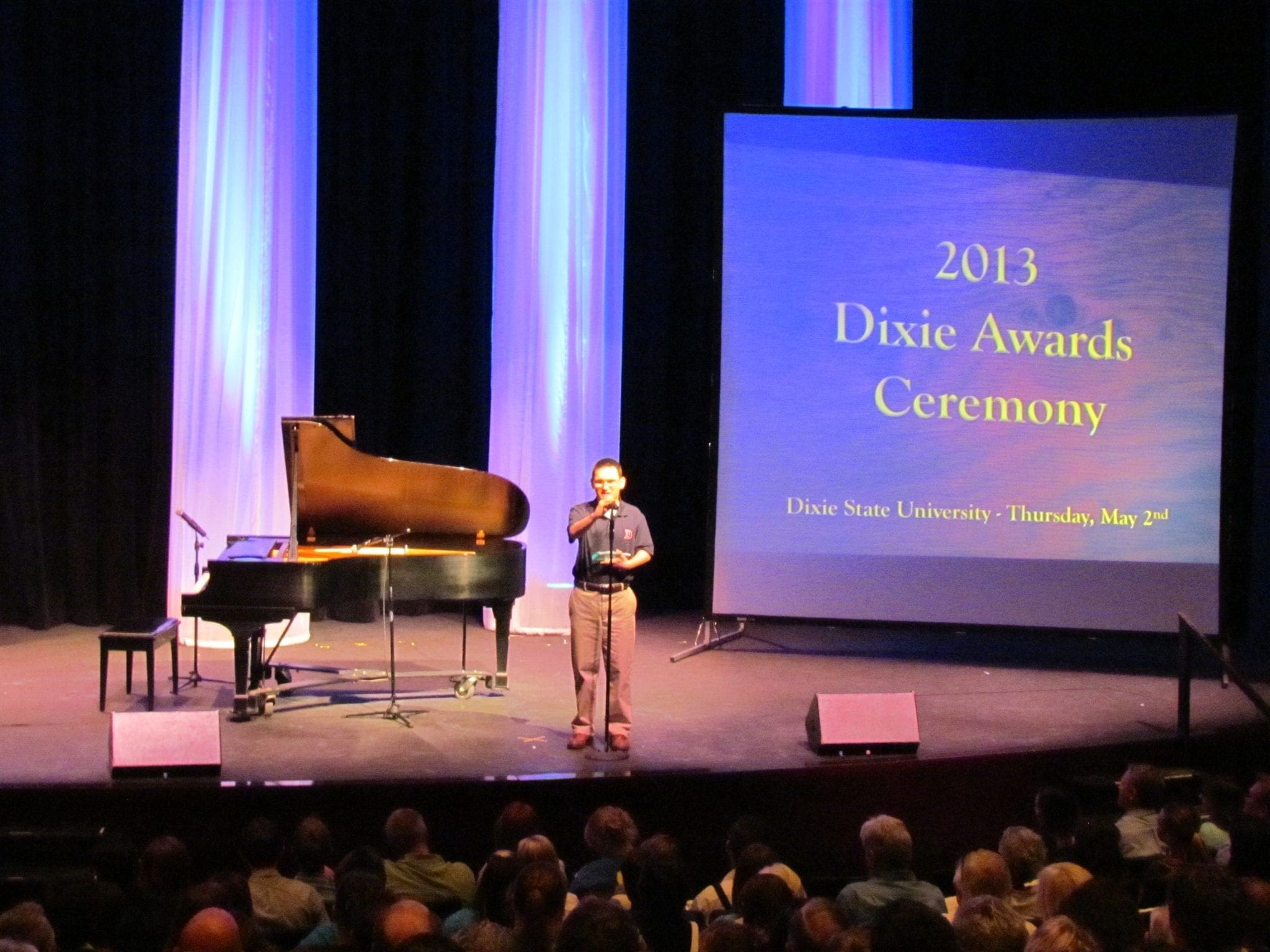