“Grace: a powerful lesson in resilience”…

Jennifer Schwertfeger is a special mother who contributed to this issue’s “Real Moms Share” section. We asked her to give us an insight into herself, as well as into her life raising her daughter Grace who was born at 24 weeks a micro-premmie. We asked her a series of questions; some serious and some “just for fun”. See what she said… 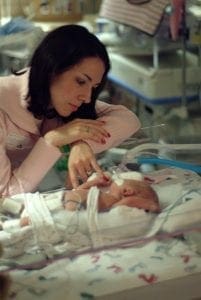 PARENTING SPECIAL NEEDS: Tell us a little bit about yourself and family.

Jennifer Schwertfeger: I live in Mankato, Minnesota, with my husband (who is a professional photographer) and three daughters: Autumn, Grace and Faith.

PSN: Tell us a little bit more about your child’s condition and diagnosis.

JS: Grace, 10, was born a micro preemie at 24 weeks, and has faced many medical surgeries. One of her biggest issues is chronic lung disease which has been the genesis of her other medical complications. When Grace finally came home (after 9 months in the NICU), she needed a lot of medical support like mechanical ventilation, tracheostomy, oxygen and a feeding tube. We had nurses in our home around the clock. In fact, the first 4 years, in general, were very critical. When Grace was about 18 months old, we removed her tracheostomy. But, on the day that we initially scheduled it, the doctors noticed a cyst that would need to be removed first. There are always setbacks, but we overcome them. When she became more mobile, I started noticing some behavior and developmental delays. She would not listen to me, and I found myself repeating things to her over and over again. She was also destructive with toys and things that she played with. In addition, she had impulses and behavior issues that I knew were a part of being born a preemie. Grace needs lots of guidance and reminders throughout her day, both at home and at school. She is doing well, and has made some incredible progress. Through it all, we were able to put our faith in our Lord, and learn how to take it one day at time.

PSN: You’ve written a book about your experience raising a premature baby entitled “Life with Grace”, can you share a brief overview?

JS: “Life with Grace” is a heartfelt memoir and helpful resource for families struggling to navigate the NICU experience. The topics include: the beginning of my high-risk pregnancy; Grace’s birth; living in the NICU/PICU; navigating the NICU; life in the hospital; bringing Grace home for the first time, etc… It also includes starting early intervention and her IEP plan at school as well as the dynamics of raising a child with special needs. 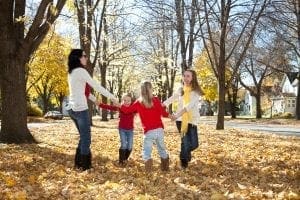 The girls and I outside playing with the Fall leaves 2014

PSN: You have shared many experiences and lessons learned in your book, and I must say that I learned a lot from your book. I especially like how you point out what you learned after each chapter. What is the biggest lesson you want to share with others?

JS: Over the past 10 years, it has been that I couldn’t magically make things better, or change how difficult my life was then! But, what I could do was figure out a way to take my own experiences and learn from each one, in the hopes of helping others. And that’s just what I did; I wrote the book, “Life with Grace”. There is hope today and so much more support offered to families in need. It was my goal to help foster and mission to as many families as I could.

PSN: Many premature babies, unfortunately, have a variety of special needs. Since much of Grace’s early years were focused on health issues, how has she developed? What has early intervention, therapies, preschool or school been like for your daughter?

JS: I will focus on early intervention. By the time Grace entered grade school, she was diagnosed with Cognitive Developmental Delays as well as other medical issues. I could see after Grace became more mobile that she had some delays, but I figured she needed lots of time with repetition in order to learn things. She had been sick for so long that her body never had the proper time to grow and be a toddler. The Early Intervention Specialists came to our home and eventually began working with her at school to help give her some much-needed one on one time. She started to catch up in her speech and physical therapy skills, but her fine motor and cognitive abilities were behind the most. She has made some incredible progress with lots of hard work. Grace learns from positive reinforcement and she gets upset if she doesn’t do something right, even though sometimes she will tell me that her brain told her to do that! 🙂

PSN: Can you share with us something YOU, personally, had to overcome by being a mother to a premature baby?

JS: It was overwhelming caring for all of Grace’s medical needs, and this became a full time job for me. I had to overcome so many fears and start believing that I could handle all this stress. I also had to overcome the fact that my child had special needs. I kept thinking, “she would just catch up and be like every other kid out there”. But, personally and intellectually, I knew I had to be thankful for all that she could do! I began to be grateful for all the abilities that she did have. I began to figure out the things that made me feel proud to be her mom. I also was worried about how to manage all three of my kids. When one child has special needs, how can I make sure that each child is getting enough attention? In the end, it all works out. We can only do so much in a given day. As my husband would say, “I did more than most”. I love him for that.

PSN: What have been some of your biggest obstacles/challenges raising your child?

JS: In a word: time. My husband and I try hard to make an effort at spending time as a family, so we can create great memories and get away from the everyday “living of the same routine”. I know my two other daughters understand that Grace has special needs, but I don’t ever want them to feel like they can’t be a kid, or have to worry about all of Grace’s needs. That’s part of MY job. 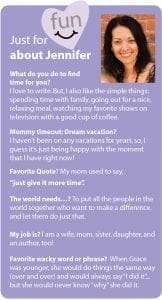 PSN: You reference in the book that when Grace was born she was no bigger than a dollar bill … WOW that visual struck a chord in me. You all have come so far…what do you want most now for Grace?

JS: My hope is that Grace will keep learning, growing and just trying. I am thankful that she can do some “self cares” herself; that alone is a blessing and it took many years to get her to this point. I dream of the day that she could be more independent, and do some things on her own, but at this point in her life, it is too early to tell. I know that she has daily struggles, but I want her to know how much she is loved. She is a miracle to so many.

PSN: What do you know now that you wished you had known earlier?

JS: When Grace had her tracheostomy, I was completely afraid that she might have it for the rest of her life. I could see her fighting with every breath. I felt defeated as a mom. I just wished that I had been able to realize that I needed to accept things and know that the future was going to be good. You have the right to be afraid, and it’s important to express those feelings to others!

JS: The summer before Grace entered 2nd grade, I had (finally) begun to notice that she was progressing; she was starting to listen to me. I knew this was a miracle all over again. It took years of working with her one on one, but what an AWESOME, proud feeling it was.

PSN: Jennifer, thank you so much for sharing your experiences and for inspiring us with the lessons you have learned raising Grace.

If you have further questions, email her at: info@lifewithgracebook.com

Miracle Babies What You Need to Know