Miracle Babies What You Need to Know

Every time I hear a truck backup alert, or the French fryer alarm go off at a fast-food restaurant, I am immediately transported back to the NICU. Beep! Beep! Beep! Even 16 years later, I still react to those beeps but I am less outward about it. Early on, I would panic and look around for my daughter trying to remind her to breathe: Breathe, Becky – BREATHE!

Any parent that has endured the Neonatal Intensive Care Unit (NICU) will read this and nod their head. This is just reality. A baby in the NICU changes you, changes your outlook on everything. Little did I know that out of my impotence as a first-time mother, out of assuming that pediatric professionals in the healthcare field knew better than I did about what was right and what was wrong, that I was on a life-altering journey. My daughter’s story is a stunning example of a system gone wrong and why better outcomes research is key for these babies, their future, and society as a whole.

Becky was the “She’s doing great!” baby despite being born at 30 weeks gestation (10 weeks early) at 2 lbs. 15.5 oz and having a bumpy 38-day rollercoaster ride through the local NICU. She struggled with heart defects, breathing issues, severe reflux, feeding difficulties, sepsis, and developmental delays. The heart monitor and oxygen that accessorized my daughter at discharge scared me. 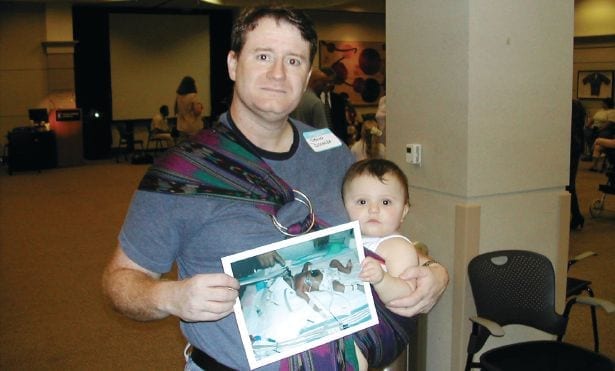 “Relax, she’s out of the NICU,” said many people over the next year as we juggled a hospitalization, specialist appointments, and worried about our daughter’s health and ongoing delays. They would eye the hand sanitizers with suspicion when they visited. The “She’s fine, don’t worry” comments didn’t ring true as I quickly realized that my daughter’s small winter cold evolved into an endless cough. “It is Reactive Airway Disease … Asthma,” said our pediatrician after months of appointments and nights of disrupted sleep. Our 18-month old daughter was prescribed an inhaler the same day she qualified for Early Intervention therapies due to global delays. Seven months later the Early Intervention therapy team discharged her saying she was ready for preschool. Even the preschool teacher looked at me funny when I told her that Becky had been premature and I noted my concerns. A month later she walked into the parent-teacher conference stating, “You obviously know more about this than I do.” Becky entered Child Find Preschool’s therapy program for the next three years.

With Kindergarten, Becky transitioned into the local elementary school and I was introduced to my daughter’s Individualized Education Plan (IEP) team of 10 people around the school’s conference room table. When asked how I thought my daughter was doing, I was honest, “Great, but something is just not right.” The school psychologist asked bluntly, “Does she look you in the eye?” Stunned, I stammered, “Yes, of course,” wondering why this was being asked now. With testing, we found that Becky had autism. I had been wondering about this for at least 3 years, but no one said a word to me – not the pediatrician and not the entire Early Intervention team. It didn’t end there. During second grade I pushed for an ADHD evaluation, which resulted in a diagnosis and treatment plan. Entering third grade, Becky’s walking and running gait grew increasingly awkward and I was ignored. Even seeing a Developmental Pediatrician and asking about Cerebral Palsy (CP) I was told it was a motor coordination disorder. The prescribed therapy, as my daughter later stated, “did nothing.”

While watching my then 11-year old daughter at the gym, I noticed her ankles were “squishy.” Fast forward to an orthopedic surgeon’s office for prescription orthotics and I quizzed the doctor about CP. No diagnosis. I figured we were done and moved on with life. Later, at 13.5 years old we were back for new orthotics and the new doctor asked Becky to walk and run up and down the hallway, commenting. “How early was she?” Dread rose within me. I watched the doctor maneuver Becky’s ankles. “See that?” she said as each one locked up. “That’s spasticity.” As my brain tried to process the extremely late diagnosis of Cerebral Palsy my daughter turned to me and said, “Mom, what’s going on?” With a consistent diagnosis of scoliosis a short time later, I was at my wits end. A CP mom noted to me by email, “If I were you, I would be a little angry right now.” She didn’t know the half of it. I was floored that such a supposedly organized system of checks had failed us miserably not once, not twice, but multiple times over the last 13.5 years. It turned out that I wasn’t alone in this at all.

Advocacy with a New Twist

With 15,000,000 preemies born annually worldwide, we have a significant community of “former preemies” growing up with real struggles and little assistance. This is as we donate tens of millions of dollars to fight the multi-pronged preterm birth issue that has no end in sight, while the NICUs are the cash cows of hospitals, and pediatric professionals lack proper insight and outcomes data. All the while federal, state and county governmental systems think it perfectly fine to cut budgets and benefits that directly affect our children. There is a lot of money changing hands, but little goes to the families struggling day after day in the NICU, at home with medical equipment and endless appointments and therapies that stretch not months, but years. These same families are at high risk for filing for bankruptcy and divorce and have further insults to their health physically and through postpartum depression and PTSD.

Becky, now 16 and thriving, recently said, “I am really lucky to have you helping me, Mom.” As Becky started to understand her outcomes, I have worked hard to not only make her realize that “with challenges come gifts and everyone has challenges so everyone has gifts” but also to stand up and advocate for herself. She saw quickly how I was working to make sure her rights were properly upheld. She has started taking an active role with her teachers, most specifically in PE class where two years in a row she advocated for herself at the start of school. Mom was impotent in the NICU but is now Mama Bear. Her cub is now Advocate Cub. I am so proud. And it hasn’t ended there. Becky, now realizing that she can do anything she wants to do, has flourished in school with the help of her IEP. In fact, the special education team was stunned when we approached them about a dual enrollment program with the local community college when she was just a freshman in high school. Our child may have challenges but she is not afraid to show her gifts. She is thriving in this unique setting to the surprise and delight of her teachers, administrators, family and friends.

I want the best for my daughter and also for these tiny babies as they grow older. I am determined to push for better support and better outcomes and to also celebrate them, too. Why? Because what they overcome will give pause to many leaders, many politicians and society as a whole. And only a preemie himself, the late Sir Winston Churchill, could sum this up perfectly, “Never never never give up.”

So, I have shaken off the scared Mom of those NICU days. I am on a mission with the roar of a
Mama Bear. With this new conviction, I have launched Crystal Ball Health, LLC, a company devoted to better outcomes data in patient populations. The first project is Preemie Crystal Ball – a digital registry for the preemie community to pool patient-reported data together to provide researchers, industry, and others a larger, more detailed set of data to seek answers and solutions to help improve the lives of preemies from pregnancy into the geriatric years. And more importantly, to provide the patient and patient families with real information that can actually help them now. The reality is, this population’s “side effects” of prematurity do not just end at birth, or two years out or even with the school years. Bit by bit, small studies are showing the mental and physical ramifications of premature birth beyond the normal timeframes. In other words, prematurity is no longer the “catch up by age 2” condition so many professionals still spout to this day to worried families in the NICU and at the pediatrician’s office. Prematurity is showing to have life-long concerns. To tell families otherwise is wrong. 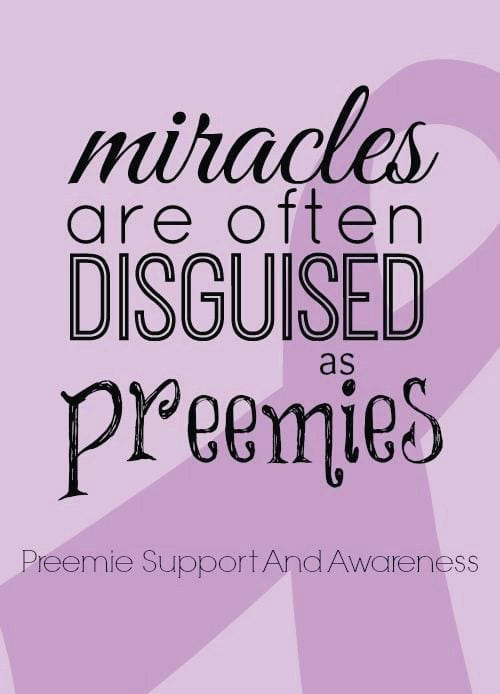 Often times, when you leave the NICU, it feels like you are walking off a cliff. What do you do to keep an eye on your child’s development? With many pediatricians having little knowledge of premature babies and the ongoing challenges, it is hard not to feel isolated and alone. Here are some tips:

Tip: Do not wait on calling for an evaluation. There are often waiting lists for evaluations. Call and get on the waiting list but also ask if you can be on a cancellation list too.

Don’t qualify for EI? Reach out to your local health department for an infant monitoring program or other resources. While these are not direct therapy programs they can monitor your child and provide tips for stimulating developmental milestones.

Seek a Specialist. Ask your pediatrician for a referral to a developmental pediatrician and/or neuropsychologist depending on your concerns. These are professionals that preemie parents often end up going to see for evaluations. If you don’t need that help now, tell the pediatrician you want the health record to state that you want to be referred to a professional when there is a concern.

Seek Other Resources. Check out PreemieWorld’s Preemie Directory for a large set of resources local, regional, national, and global. https://preemieworld.com

School Resources. If your child is in school, ask for access to an individual education evaluation for a 504 plan, or Individual Education Plan (IEP). While the team cannot diagnose your child, they can do testing and provide insight that can then be used with your child’s doctor for further interventions. Not sure if the school has your child’s best interests at hand? You can hire a special education advocate (sometimes this is an attorney).

Advocacy Can Be Exhausting. Make sure you take time out for you. This feels like a marathon – mainly because it is. It’s okay. Taking self-care is not taking away from your child or your family. It is taking care of yourself properly so you are able to give your best self to all who need you.