Everyone has sensory feelings surrounding touch; some may love it, while others loathe it.

Be sure to also check out our Parenting Special Needs video too!!! (scroll down)

In the pandemic, loneliness has been exacerbated for some by experiencing touch deprivation. Our thoughts and behavior surrounding touching have a lot to do with our family’s culture and values, along with our individual threshold for sensory stimulation. For every person who hugs someone they meet for the first time, there is another who cringes or may find it off putting or overly friendly.

For most of us, touch, particularly sexual touch, is not something that we are used to discussing with others, even our most trusted companions. But for children with disabilities, it’s an important conversation because according to the Vera Institute of Justice (2021), they are almost three times more likely to experience sexual assault than their typically developing peers, and the likelyhood is even higher for children with intellectual disabilities. For children with physical disabilities who are used to getting hands on assistance for using the bathroom, or dressing, it may be difficult to distinguish an assistive touch from an illegal one. Our discomfort surrounding these kinds of conversations actually enable perpetrators of sexual assault to remain covert and confident that their victims are unlikely to disclose their experience. 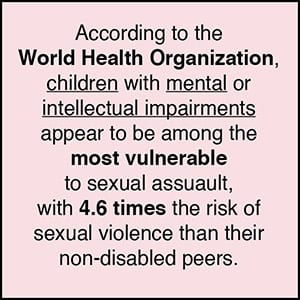 As family members, one of the easiest ways that we can promote safety for our children is for everyone to start asking permission before touching anyone else. This is an easy way to practice safe touch, and creates a good example for kids to follow so that they will learn to ask others prior to initiating touch in the future. If you aren’t used to doing this, it can feel awkward at first. Using your sense of humor and making it into a game can make it fun, but be sure to weave in the idea that it’s a good idea for everyone to ask permission before kissing or hugging, and that your child’s body belongs to them. No one has the right to touch them without their approval.

This includes parents, family members, babysitters and school personnel. It’s different for medical personnel, but typically they wear gloves and announce what they are doing before they begin a procedure. Essential adaptive equipment is an extension of someone’s body, and the same touch rules apply to wheelchairs, walkers, communication devices, and other adaptive equipment. Practicing how to ask for permission, how to deny permission, and how to inform others that they need to ask before touching them provides our kids with a toolbox of phrases that can be accessed throughout their life. It also opens the door for conversations later if they have been touched in a way that is not okay with them. Eventually, this should lead into a conversation about touching “private parts.”

Providing a name for “private parts” is another critical strategy that we can use to arm our children against unhealthy relationships and sexual abuse. Using the correct names for body parts and describing them directly and without squeamishness eliminates the notion that saying the word vagina, or vulva, or penis, is dirty, secret or bad. This is something that may also take a lot of practice on our part as parents because we are not used to talking about our vaginas or penises in polite conversation, and inadvertently, we may have passed that discomfort along to our kids. Through our interactions with adults with disabilities, we were surprised at the alarming number of older adults with intellectual disabilities who were never taught the correct names for body parts in their entire lives. These discussions reinforce the idea that talking about, touching, or revealing private body parts should occur in private places. And, although touch may not be involved, a child can also be a victim of someone else exposing themselves which may be terrifying for them. Being able to describe body parts by their correct names gives kids the vocabulary to be able to accurately describe something that may be illegal in words that everyone can understand. 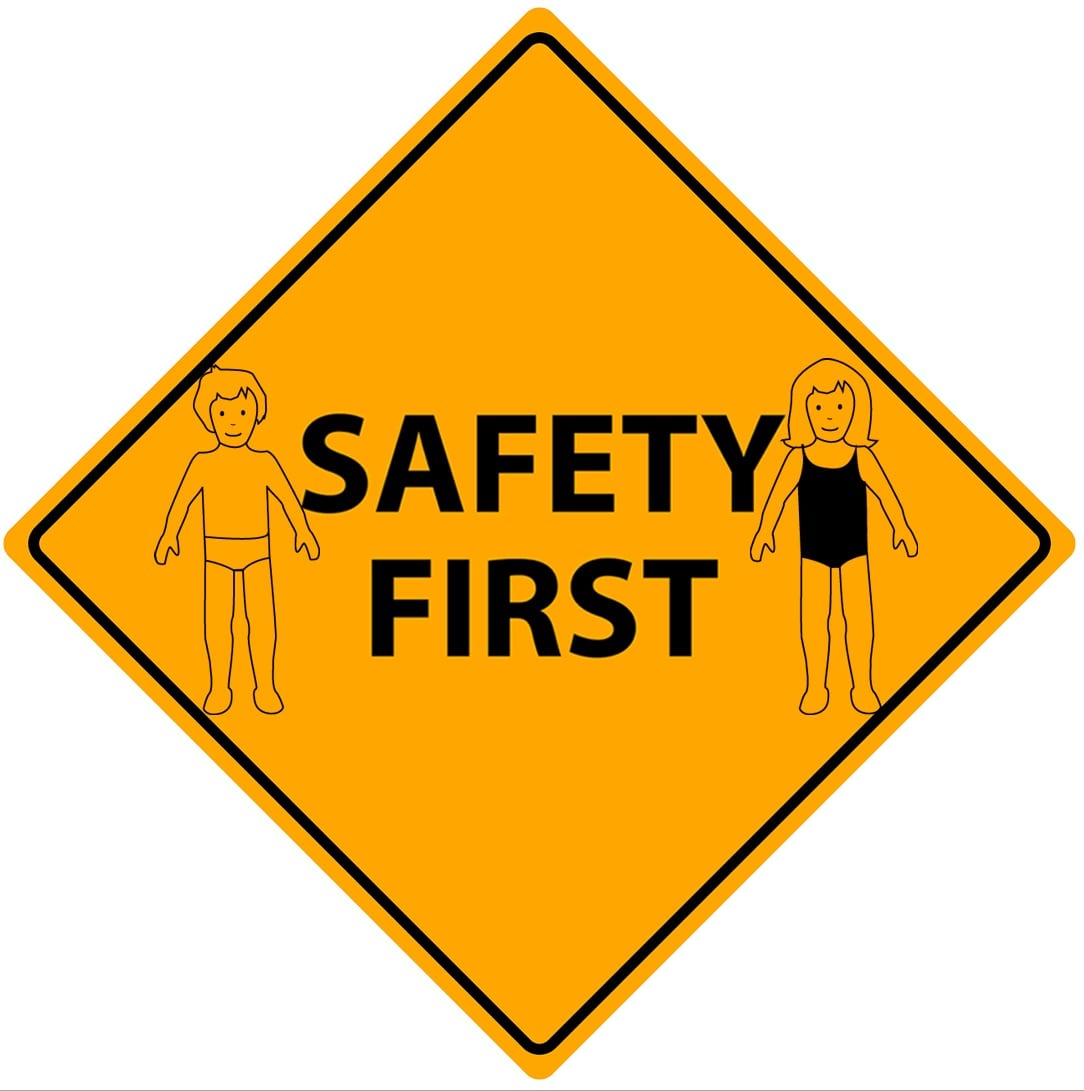 Many children are taught “the bathing suit rule”- that is, that the area covered by a bathing suit is a no touch zone. While that is generally a good guideline, children can experience molestation in other ways, using their mouths, hands and other parts of their bodies that are not bathing suit related.

In teaching children about protecting themselves, it’s tempting to repeat the advice we may have received about not “letting” anyone touch us. Sadly, most perpetrators of sexual abuse use strategic methods to coerce children into believing that the interaction is consensual or use distorted reasoning to make the child believe that they did something to deserve it. As we mentioned in our last article, the majority of perpetrators are not strangers, they are people who may be known and trusted by the child and their families. Because many children are taught to be respectful and defer to adults, this places them in a completely foreign role of needing to set boundaries on the behavior of others who are in a position of authority. That’s another good reason to rehearse ways of letting others know that they need to seek permission before touching them. Telling a child not to “let” someone touch them sexually, can also compound their feelings of shame and blaming themselves, which can intensify the trauma of sexual assault. It’s our job, as adults, to protect kids from experiencing abuse, by avoiding putting them in vulnerable situations and by asking questions in an environment where they would feel comfortable disclosing situations that may have made them uncomfortable. In our last article, we wrote about establishing one person in your child’s life whom they could appoint as their source for trust and secure attachment. Disclosing information to this person could provide them with critical support and resilience in the case of a sexual assault or just a bad experience.

I have a good friend whose daughter came home from a night out and confided in her mom that she and her friend shared a romantic kiss. To her credit, my friend’s first response was, “Did you like it?” Although it’s hard to think about it while they are young, our kids will someday be seeking an intimate partner and we can help lay the groundwork for healthy, consensual relationships. No matter what your family values dictate, rather than using approaches based upon fear and punishment, it’s better to acknowledge that intimate touch is okay as long as both partners agree and that it takes place in a private place. Younger children will likely not be curious about this kind of sexual touch until the onset of puberty. But adolescents may be vulnerable to risky relationships which is why it’s so important for kids to recognize boundaries surrounding trust and how to seek help if an experience turns out to be different than what they expected. 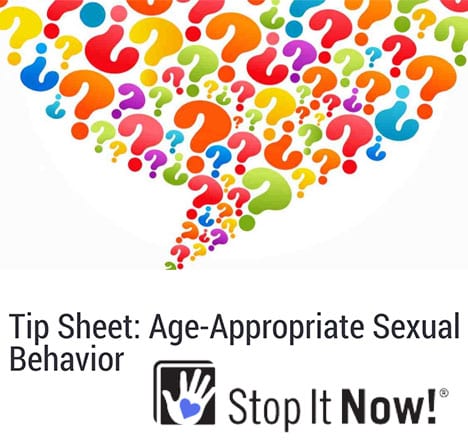 For a tip sheet on age appropriate sexual behavior, click.

A common practice in families is ordering children to provide hugs to others. I have been the awkward recipient of hugs from young children whose parents have commanded them to give me a hug as a thank-you gesture after I’ve given them a gift or a favor. For the recipient, a forced hug is void of all its emotional joy. For a child, this may be sending a message that if someone provides you with something, then you owe them physical affection, and that may chip away at their self-determination. Like so many other things, as a parent of a child with a disability, managing this dilemma requires some advanced planning and conversation. When grandma comes to visit only twice a year, and you are torn between wanting her to feel welcomed and your child’s self-determination, have a chat ahead of time to ask your child how they feel about giving their seldom seen relative a hug and explain your family’s cultural practices. Ultimately though, it’s important for the child to know that they are the one who decides who gets to deliver affectionate gestures, and that their choices will be honored.

Not all children communicate with words. It may be harder to detect unhealthy relationships with kids who do not have communication systems and they are particularly at risk for sexual assault. But as parents and family members, we know their typical patterns of behavior. An abrupt change in behavior is a serious red flag that something is not right. Some other behaviors may include sleep problems, not following directions, an increase in self stimulation or self-injurious behaviors, escape/avoidance behaviors or repetitive behaviors.

As family members, acknowledging the potential of sexual abuse for our children takes a lot of courage. Providing them with easy, practical skills to promote their understanding of healthy and unhealthy touch at any age is one of the best strategies to build empowerment. 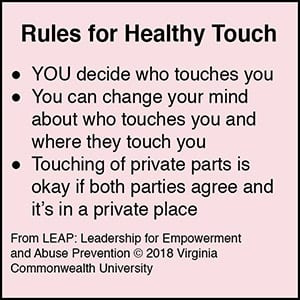 For more information about recognizing and responding to abuse of children with disabilities, The VCU Partnership for People with Disabilities developed a three-part webinar series that may be found at: https://web.partnership.vcu.edu/tippingthescales/.

For more information about preventing child abuse, check out Stewards of Children Training available at Darkness to Light at www.d2l.org.

Molly Dellinger-Wray, MS Ed and Parthy Dinora Ph.D are part of The Partnership for People with Disabilities at Virginia Commonwealth University, a university center for excellence in developmental disabilities. Together with the VCU School of Social Work, Molly and Parthy developed an evidence based project to teach adults with intellectual disabilities about healthy relationships called LEAP: Leadership for Empowerment and Abuse Prevention. They are both moms of successful children who benefitted from special education services.