“Coping” One Day at a Time 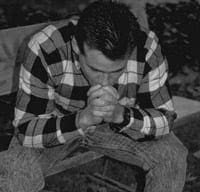 As caregivers of special needs children, we may sometimes get caught up in the day to day routine and not realize that things can change.  The reason I am writing about this is because the other day, a gentleman had his grown, developmentally disabled son with him at our day program who was agitated. The son was agitated and hit his father. The father allowed his son to hit him as if this was acceptable behavior because he said nothing to him. He may have not wanted to scold him in front of people, but, to not address it is going to teach the son that it’s acceptable behavior.

Possibly, the father didn’t realize he had options. The father could have told his son firmly “no hitting” and taken his hands and told him to put his hands down. He could have realized that his son was extremely agitated and needed to go to a quiet place to calm down away from people and all distractions. His son was obviously uncomfortable and tense. Sometimes, when people are agitated, they do need medication to help calm. Medication is an option, but,  should be one of last resort if the person can’t calm down by themself. He could also reward his son for the times that he is behaving appropriately so that his son learns that he can earn things for behaving appropriately. If his behavior is an ongoing problem, a behavior analyst may need to come into the home or program to assess the situation and possibly develop a behavior plan that addresses his son’s negative behavior.

I like to use a program that’s called “coping” to help calm people down when they have displayed a negative behavior or are upset. The person is told to come do “coping” and taken to an area where there is no stimulation. It can be a bedroom or a living room, as long as it is a room with no people and no distractions such as a TV or radio. It should be absolutely quiet. The person is then asked to sit for two to three minutes with no talking.

Once the person has completed the two to three minutes, he is thanked for staying quiet. He is then told that the negative behavior that he displayed is unacceptable and he must solve the problem by talking instead of acting out.  The person is then given a chance to talk about why he acted out and what is bothering him. If the person is a non-verbal, you can use pictures. If the person isn’t calm, he remains in coping until he is calm. People should practice using coping before implementing it so the person who is to do coping becomes familiar with the process. Coping is a positive way to solve problems by talking instead of acting out.

I did not get a chance to talk to the father that day to discuss his son’s behavior, but I did the next day and he was receptive to some of the options.  We all have options, but, sometimes people need to tell us what they are or we may get to a point where a situation gets so bad that we seek help. Sometimes, we don’t even recognize there is a problem. But, options are always there. We just need to seek them out as we cope one day at a time.