Paige Talhelm: My Brother Helped Shape Who I Am and Will Become…

Paige Talhelm contributed to this issue’s “Real Sibs Share” section. We asked her to give us an insight into herself, as well as into her life being a sister to a younger brother who has been diagnosed with Autism. See what she said…

PSN: Please give us a brief snapshot about your family and your brother (now).

PAIGE T.: Currently, Sammy lives at home with our mom and our younger brother, Jack, who is 16. During the week, Sammy goes to a school for individuals with Autism called the Vista School in Hershey, PA. There, he works one on one in a classroom with 5-7 other students. He attends year-round and at Vista he gets OT, PT, Speech, ABA, etc. My mom is his sole caregiver and has to build her schedule around his. She needs to be present to get him on and off the bus, take him to appointments, and whenever he is randomly off school. Sammy also loves to hang out with his brother, Jack, and watch him play video games. I, myself (Paige), am currently away at school but I come home many weekends to hang out with Sammy and my family. I am going to graduate with a Bachelor’s Degree in Psychology in May, 2015. I then go to Johns Hopkins to get my Master’s in Education for autism and other pervasive disorders. 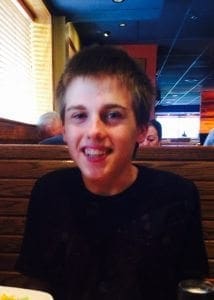 PSN: Tell us a little bit more about your brother’s diagnosis, personality etc…

PAIGE T.: Sammy, 17, has been diagnosed with Autism. He goes to an Autism specified school. He is non-verbal and considered very low functioning. He uses ProLoQuo2Go to communicate and is only able to tell us “I want ____.” Other than that, he is unable to participate in conversation. Sammy also isn’t toilet trained so he has many “accidents” each day. He might soak the bed, carpet, or couch which leads to a 3-day process for my mom to “air-out”, wash, and dry everything. To say the least, we have a lot of sheets, and even with as many sheets as we do have – there isn’t enough to keep up with Sammy’s “pee routine.” Other than that, Sammy has a beautiful smile. He is constantly listening to music – the more explicit, the better for him. He loves chips (he eats like a goat), but come between Sammy and his chips, and you might as well bite your own hand off. If he isn’t watching Law & Order SVU, golf, or something else with his family, he is chilling out in his room snuggled in a ton of blankets and pillows with his music. He has a crazy sense of humor and his laugh is contagious. 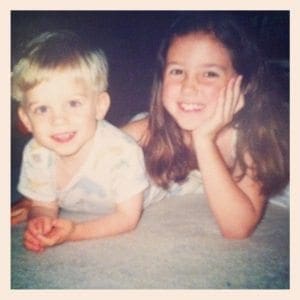 PSN: Share with us something YOU, personally, had to overcome by being a sister to a brother with special needs.

PAIGE T.: Something that I have always struggled with was letting myself hurt or feel angry about something. This is because as Sammy’s sister, I see him struggle with some of the simplest tasks that people take for granted every day. With that being said, he always wakes up with a smile on his face and works harder than anyone else I know. When I am feeling disappointed or annoyed, I often find myself thinking I am “out of line” because Sammy has it way harder – he knows what a real struggle is.

PAIGE T.: I was an only child for 6 years until Sammy came along. To be completely honest, I was definitely jealous and angry with him for taking the attention. Not just the attention that any sibling feels when their first younger brother or sister comes along, but an attention that made me feel like I didn’t want him around. Which, of course, isn’t true anymore, he is the light of my life, my pure inspiration and I couldn’t imagine my life without him. However, as I’ve gotten older and began writing my blog, I have realized how much I appreciate some of the things I go through. Things like heartbreak, prom, getting a job, leaving a job, going out to dinner with a friend, etc… Those things mean so much more to me because Sammy hasn’t (and may never) experienced it. When I am super upset about something, I constantly remind myself that Sammy may not even have the chance to experience this kind of thing and then I feel bad for being so weak. Whether it’s as “little” as going to class or as “big” as feeling sad because of a breakup, it kills me to know that Sammy may never know the feeling of love, graduation, depression, etc. That’s what life is, is it really life if you can’t experience all of it? 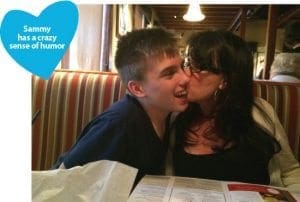