When you think of the word “dedication,” there is one individual who comes to mind who has demonstrated a love and devotion to his family, in particular to his son, Rick, who was diagnosed at birth as a spastic quadriplegic with cerebral palsy. He has spent the past four decades inspiring countless people in the special needs community. This very “special” special needs father has demonstrated a commitment to a purpose much greater than himself, which has helped inspire people with disabilities, as well as families all around the world. 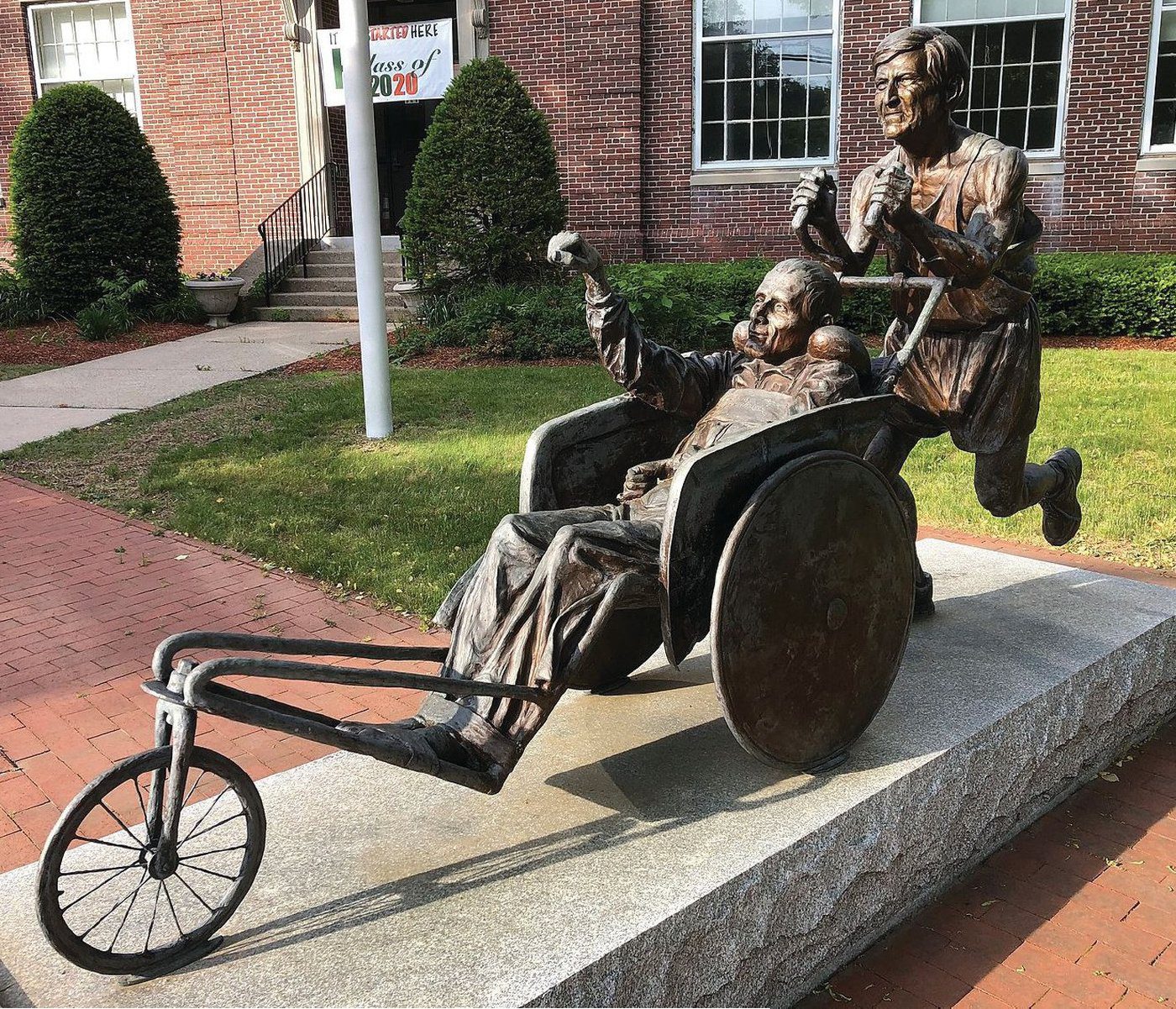 Here, we are honoring the late, great, Dick Hoyt, Sr., who recently passed away in March at the age of 80. His unmatched commitment to his son, family, and the special needs community has offered fathers of special needs children all around the globe great hope, inspiration, and encouragement. Mr. Hoyt has shed light on what it truly means to never give up, despite the daily challenges that are presented to parents raising a child with special needs.

Dick Hoyt was born on June 1, 1940. He grew up in a big family of 10 kids (five boys and five girls) in the small town of North Reading, MA. Dick enjoyed staying active throughout his youth. In high school, he was a three-sport athlete and was the captain of his high school’s football team. Upon graduation, Dick entered into the Air National Guard, where he spent the next 37 years serving his country. 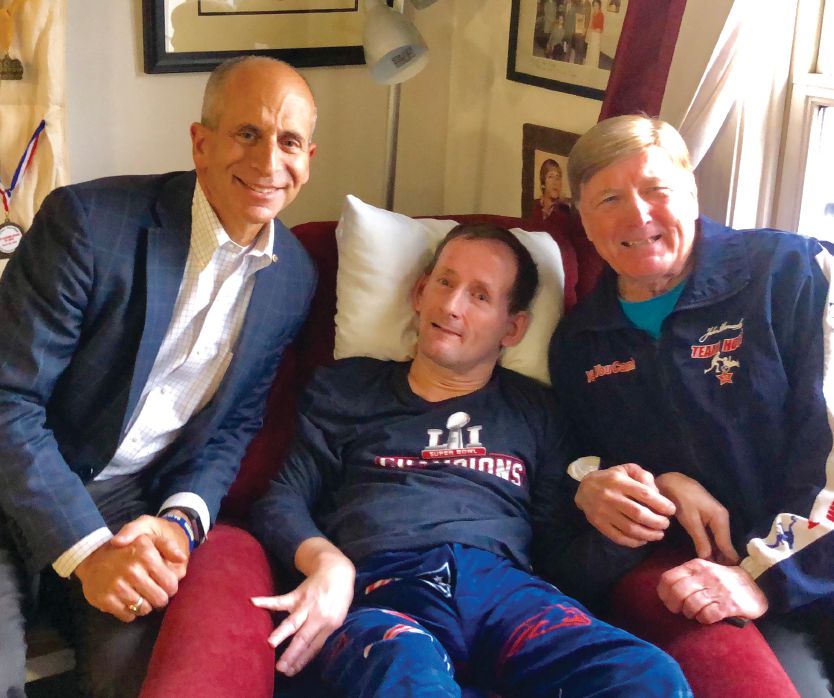 The Birth of His Son Rick

In 1962, Dick and his wife, Judy, gave birth to Rick (their eldest of three sons). At birth, Rick was diagnosed with a condition known as spastic quadriplegic with cerebral palsy. Many doctors suggested the institutionalization of Rick, saying that he would be nothing more than a vegetable. However, the Hoyts saw otherwise.

Judy spent hours each day teaching her son the alphabet. With the help of a team of skilled engineers at Tufts University, an 11-year-old Rick received an interactive computer that was personally built for him. This allowed Rick to communicate his thoughts into words, which clearly demonstrated his high cognitive ability. And so began a long road ahead where Dick and Judy fought tooth and nail to eventually get their son integrated into the public school system by the time he was 13-years old. 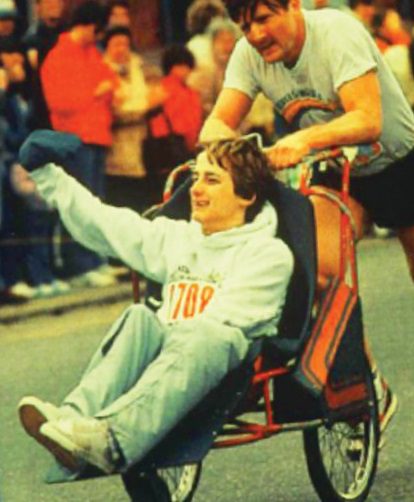 In 1977, Rick expressed to his father that he wanted to participate in a 5-mile benefit run for a lacrosse player who had suffered paralysis in an accident. Dick agreed to participate and push Rick in his wheelchair. Upon completing the event, Rick said to his father, “Dad, when I’m running, it feels like I’m not handicapped.” That was the birth of “Team Hoyt.” 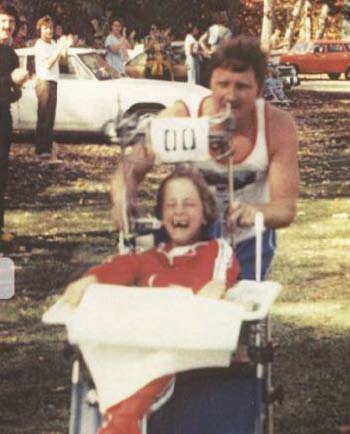 For the next 40 years, both father and son competed together in over 1,200 races, including 72 marathons, 34 of them being Boston Marathons, as well as six Iron Man Triathlons. Team Hoyt was inducted to the Ironman Hall of Fame and were the recipients of ESPN’s Jimmy V Award.

David Hirsch, founder of the 21st Century Dads Foundation, is also the creator of The Special Fathers Network, which is a dad-a dad-to-dad mentoring program for fathers raising kids with special needs. Hirsch is an outspoken advocate for father involvement and hosts the SFN Dad to Dad Podcast. I had the opportunity to ask David some questions that I felt would best offer support to fathers raising special needs children.

What does it take to be a special-needs dad?

“It’s important for all dads to be present; physically, emotionally and spiritually in the lives of their children. If you have more than one child, remember that you are a father to all of your children, not just the one with special needs. Be very intentional about spending time with all your kids.”

What do special needs dads need to hear?

“You’re not alone unless you choose to be. Avoid the tendency to figure things out on your own. Seeking resources is a sign of strength and enlightenment, not weakness. There are other men who have gone through a similar situation and who are willing to share their experience with you. The Special Fathers Network is one of those resources. Read books and listen to the SFN Dad To Dad Podcasts and be inspired by stories of dads, many of whom say, “I would not have asked for a child with special needs, but knowing everything I know today, would not change anything.” Attend the SFN Bi-Weekly Dads Zoom Calls and connect with other dads and learn from their experiences.”

What are the best words of encouragement to pass along to other dads?

“Treat your kids with special abilities the same as your typical kids. Dick Hoyt is a poster child for including Rick in all of the family’s activities. By being overly protective of a child (typical or otherwise), we further handicap our kids. Do not put limits on your kids. God only knows what they will be able to accomplish.

What can wives do or need to know to help support special needs dads?

“Encourage them to connect with other dads, as well as provide them with personal time to do things that are beyond family and work.”

A few years back, Hirsch had the opportunity to sit down with Dick Hoyt at his home in Holland, MA, and feature his story on his popular SFN Dad to Dad podcast. Mr. Hoyt’s amazing story has inspired those who are physically disabled to become more active members of the community.

At the heart of Dick Hoyt’s legacy rests his personal motto, which I feel is important for all fathers of special needs children to embrace wholeheartedly. And that is: “Yes, you can!”

The message is that you are never alone in your challenges and there is a great deal of support and resources available for you and your children. You aren’t always going to get it right. You are going to make mistakes. Remember to forgive yourself for those mistakes and keep moving forward. Parenting a child with special needs is like a marathon. You and your child can win the races, too, just like Dick and his son did time and time again.

On behalf of the special needs community and the countless lives touched in so many capacities, I would like to thank Mr. Dick Hoyt for showing us that with the most daunting challenges come the greatest of rewards. We can clearly see that in this real world Superman-Superdad, there was nothing that could stop Team Hoyt.

I will end by sharing these three words to you Mr. Hoyt: “Yes, YOU DID!”

To register go to: 21stCenturyDads.org

ABOUT AUTHOR
Douglas Haddad is an award-winning middle school teacher and the best-selling author of The Ultimate Guide to Raising Teens and Tweens. He has been awarded “Teacher of the Year” in his Connecticut school district, as well as represent the state of Connecticut as a Teacher-Ambassador in Public Education. To learn more, visit www.douglashaddad.com