Dinner’s On: How to Cook Once and Feed All Eaters

One night, in the not so distant past, I found myself cooking three meals, three times a day. If you’re doing the math, that’s nine different meals every single day for three very different types of eaters. Dinner was the worst: By 6 pm, I would begin prepping a meal for me and my husband to eat after all the kids went to bed. By 6:30 I’d whip up an easy-ish toddler dish for my three-year-old twins while simultaneously chopping and dicing and foraging for a third meal for my five-year-old son with cerebral palsy. He has chewing and swallowing issues. His food takes the most thought of all of us. Plus, he’s five, so there’s the “picky-factor”. That’s way too much thought put in to what we put in our mouths. Plus, we never ate together, because when would I have time to sit down with all that prepping and baking and microwaving and pureeing?

Through sweat, creativity, consultations with feeding therapists, and a hefty dose of desperation, we’ve finally got this dinner thing down. We eat together. We eat the ONE meal I fix a night. And I sit down; I really do; And here’s how you can, too. 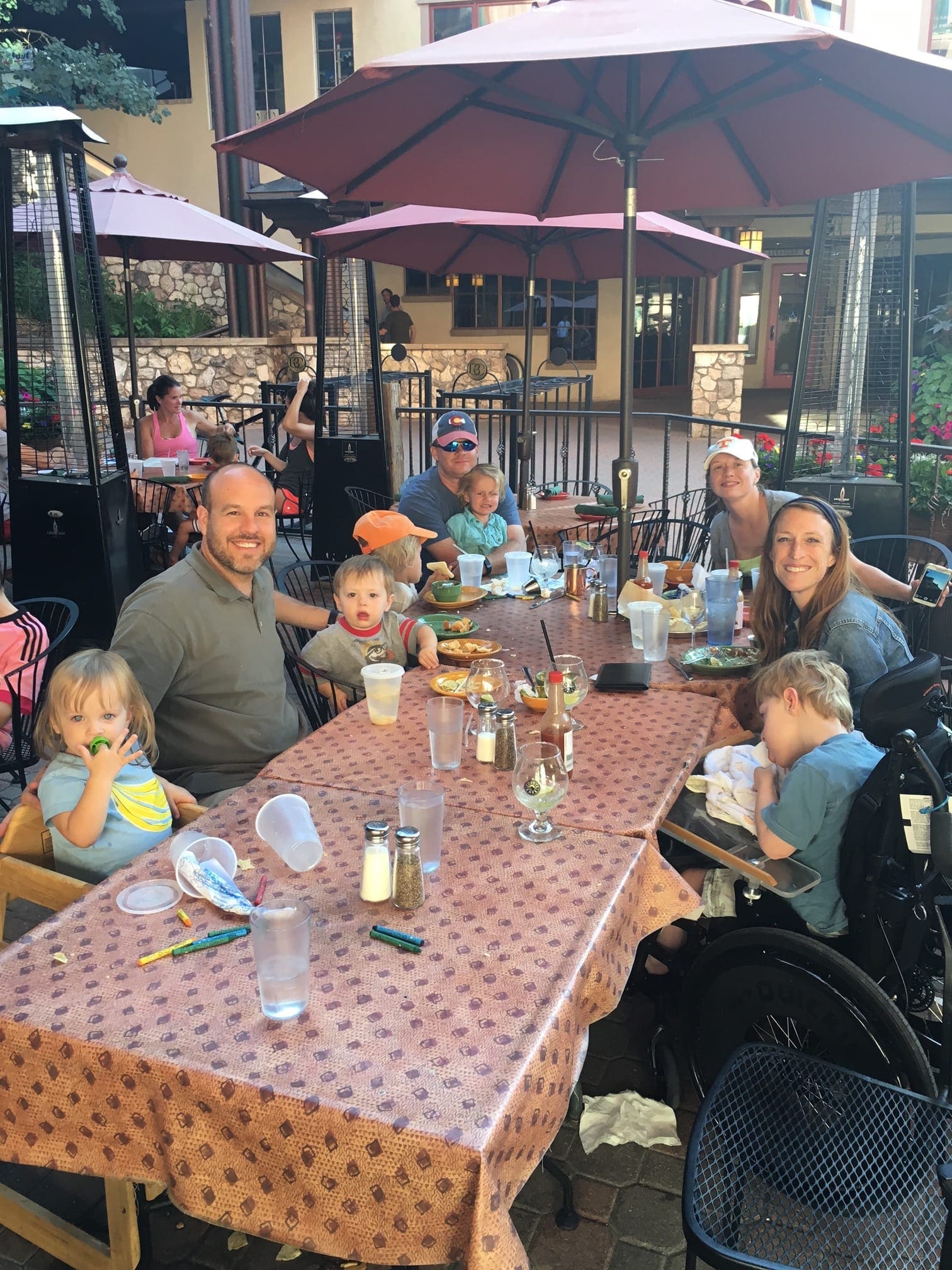 This seems counterintuitive to easier eating, but they will be more willing to try more foods if they are invested in the process. If they see what goes in to each meal, it is less intimidating. Suddenly, that spaghetti sauce isn’t really red goop, but instead a bunch of tomatoes they helped squish up and mix with their favorite sausage from breakfast. Despite his limited standing and walking skills, my oldest is a champ at the stirring and he mans the timer so we all know when dinner’s ready. He’s also my place setter. Getting him comfortable using utensils was a long process, but putting him in charge of placing them around the table for the family was a step in the right direction.

Picky eaters need to see each component. Because of that, casseroles are not always your friend. No one wants to stumble upon a slimy mushroom in that tuna dish. So, we combine as we go, upping the complexity as we age. For my kids, I keep the noodles separate from the sauce and let them sample each before, hopefully, decided to mix and match. And forget salad; our veggies are a masterpiece in deconstruction. Let them dip carrots and cucumbers and tomatoes in dressing or hummus, while you mix it all up for the grownups. I’ll also steam the veggies for my oldest who has trouble chewing.

Easy on the Spices

You can always add oregano later. Sometimes that last dash of pepper or that unfamiliar tang of thyme can end it for a picky eater. Keep the spices minimal. And really, what does it matter if it’s not America’s Top Chef? You’re not worried about the taste profile right now. You’re just in it for the family time and independence at the dinnertable. My husband knows to grab the smoked paprika or seasoned salt for us and leave the kids’ plates alone. We’ve also convinced them to try a wider variety of spices by simply showing them that it’s what we like. Suddenly, the fact that it’s what the adults are doing, increases the incentive.

Consider all the Food Groups

There’s a reason kid plates are divided like they are with one big space and two smaller ones. Always try to aim to fill half the plate with fruit and vegetables, Va with grains, and Va with protein. Obviously, this is a goal, not a law. Some days all we want is a big bowl of macaroni and cheese with nary a broccoli spear in sight. Overall, though, balance is nice and fruits like blueberries or applesauce are easy to add in a pinch. The best way I’ve gotten my son to try new fruits is to dice them until they bear no resemblance their original selves and throw them in some yogurt. When in doubt, supplement with squeeze pouches or smoothies. But don’t stress. We do what we can and move on.

When you’re whipping up that huge vat of spaghetti and Bolognese sauce, consider your people. Can they use utensils? Would finger foods be better? Whatever goal you are working towards, make that part of the meal. My son is better with a fork than a spoon, so I’ll cut the noodles up into “fork-able” bits. Then, I’ll leave the meat crumbles for him to pick up separately with his fingers. If the goal here is autonomy so that everyone can sit and eat together, then you have to construct the meal in a way that makes that possible. Same food, different format. 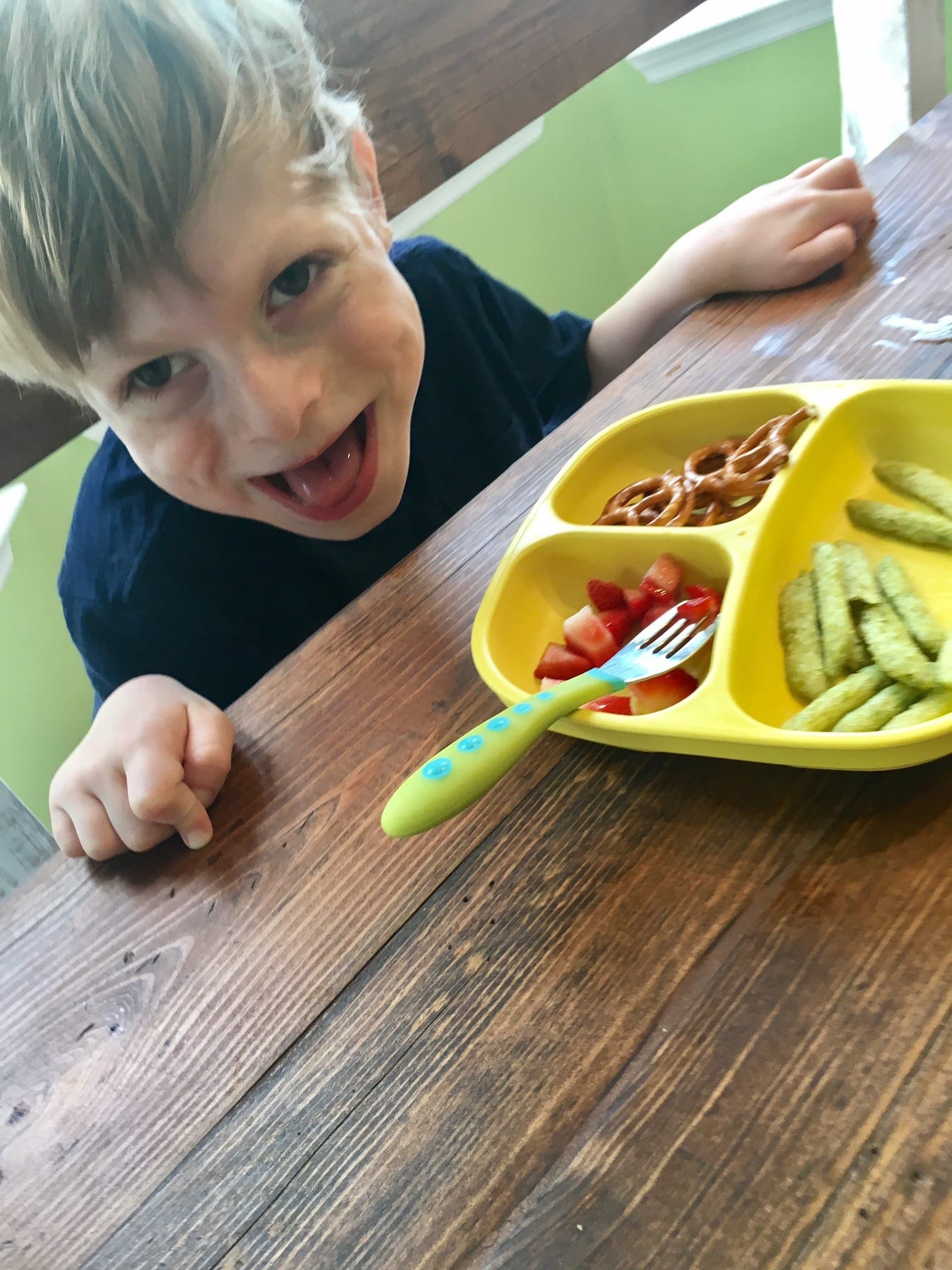 It takes a while for kids to acclimate to a new taste. They need to try, and maybe reject, it 15-20 times before it becomes part of the norm. So, make extra and then a little more. Leftovers are a whole new chance to mix it up. Put the meat sauce in a tortilla. Serve those noodles with a side of peanut sauce for dipping. You want to come at each food from every angle. Like playing old-school Galaga, you want all rockets firing. And the more you make, the less you will have to do later. That’s the gift that keeps on giving.

Whatever approach you decide to take, please know, I hear you. I know how hard dinner can be. It can get better though. One day, you might just find yourself sitting down, at the table, with your family, eating that one meal you made while it’s still hot. And you will give thanks.

Jamie Sumner s a writer and author of the website, The Mom Gene (mom-gene.com) and the mother to a son with cerebral palsy and twins.

How Does a Patient Portal Benefit My Child?