It’s safe to say that no family is ever going to be perfect, but, as we learned from Big Daddy, you can use acceptance, gratitude and humor to help overcome a great deal of adversity. Big Daddy shares from the lighter side of raising a child with autism. In an interview with him, we asked several questions about him and his family and in between laughs we understood why Big Daddy’s been called, “The Dave Barry of Autism Parenting…”. It is for that reason that he was selected as a “Super Dadvocate”.

When explaining his family Big Daddy gave us great insight stating, “What can I say about my family? Um, how much time do you have?  I’ll go in descending order, by size…I’m big and a bit insane.  Since retiring from my life as a complete lunatic a few years ago, I now spend my days enjoying my kids, puttering around the house, sleeping past noon, yelling at the TV, and thinking about what to eat for lunch. I frequently snack and never miss an opportunity for a long nap. I’ve written tens of thousands of words about Griffin. But, in a nutshell, he is fifteen, adorable, autistic, and the most unique individual I have ever had the pleasure of spending time with.  And I’ve spent time with a ton of unique individuals! My lovely wife is the glue that holds the clan together.  Stunning with a great sense of humor. Finally there is my 12-year-old daughter. Perfection. No further description required”.

Big Daddy’s story is far from ordinary. When asked what he wanted the readers to know about him he said, “The whole family definitely shares my perspective when it comes to Griffin.  In our family we use humor as a coping mechanism, and also as a way to bring Griffin into our world. He understands and uses sarcasm, which, we have been told, is unusual for kids with his diagnosis. We try not to coddle or baby him. Quite simply, he is a member of the family and he gets the same razzing we give each other. He rarely teases back as good as he gets. However, when he does zing someone, it is beyond awesome. Making fun of him, in our opinion, not only doesn’t not hurt him, we think it, in fact, makes him stronger”.

This was the start of the idea to “blog”. Anyone who has been affected can back me when I say there are some pretty funny and clever lines that our children deliver on a not so often basis. Big daddy noticed this in his son and when asked about his son’s diagnoses Big daddy informed us, “When Griffin was first diagnosed in 1998/1999, we felt as though our lives collapsed.  While there were many resources focused on coping with tragedy and practical advice for dealing with a disabled child, we found few references describing how having a child with a disability was not all about sorrow, lost hopes, making do, and heartache but rather could be a lot of fun, too.  To fill this void, we began a crusade, of sorts, to make the public aware that life doesn’t end with a diagnosis of a disability. Then, about 5 years ago, a health induced lifestyle change resulted in me spending a lot more time with Griffin.  I realized that he is hilarious (sometimes intentionally) and the world needed to hear about him.”

“We stopped trying to fix him and started to enjoy him and share him.”

Big Daddy continued, “one thing I’ve learned and would like to share about that has made a big difference is to revel in the uniqueness and lunacy. I am blessed to get to spend so much time with such a unique individual. Also, do not tolerate the intolerant. When people stare at, or mutter about, Griffin, I stare right back and get right up in their personal space (it helps that I’m 300 pounds, heavily inked, and have a shaved head!) People don’t stare or mutter twice. Screw intolerant people.”

In closing, if you have not already read his blog/book I highly recommend it. It offers more than just a laugh. For me, it reminds me why I am blessed to be the guardian of a special needs child in the first place, and hopefully it does the same for you. 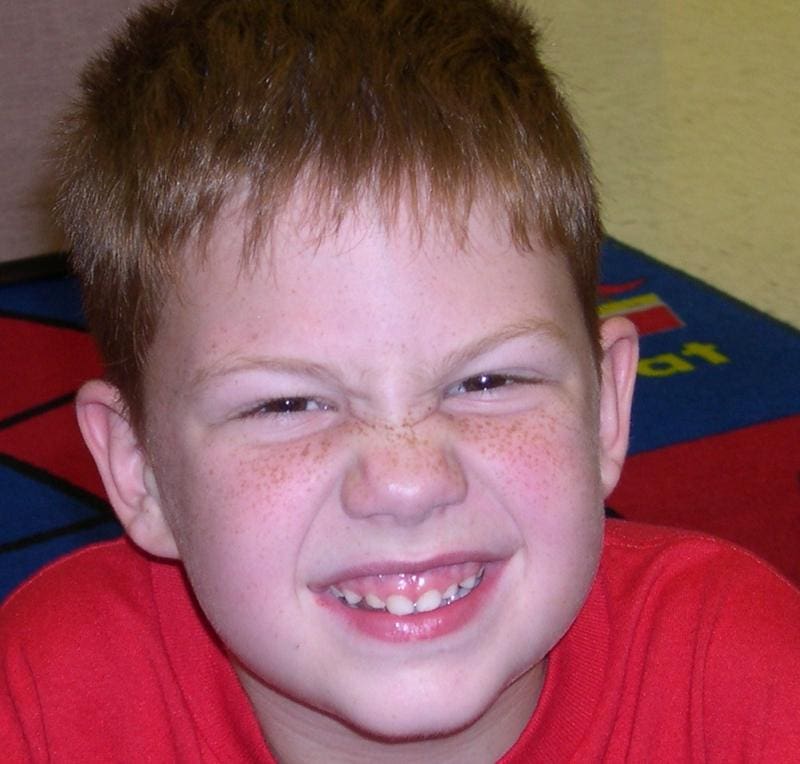