Riley sits cross-legged on the floor, banging a big, round drum.  It’s the beginning of his music therapy session with Noreen Donnell, Clinical Director of Music Therapy at blueballoon Health Services. Riley has been doing Music Therapy with Noreen since he was 3 years old. Riley, now 15, is asking questions as he bangs out a rhythm on the large drum. “What’s your favourite movie?” he asks music therapy intern, Natalie Laughton.

Music acts as a foundation for Riley to learn other important life skills, such as: conversation, problem solving, language, and social skills. Later, Noreen holds up a book which lists the days of the week, and the activities Riley does each day and at what times. Riley has a busy weekly schedule that includes school, yoga, drama, swimming and music therapy. As Natalie strums a guitar and sings a song about daily routines, Riley correctly names the times and matches a small Velcro-card, depicting his daily activities, with the correct time in the book. The music therapy card is placed at 5:30pm on Thursday.

Leanne, Riley’s Mom, says, “Music engages Riley’s interest and allows us to apply all of the concepts that we are trying to teach him. Riley has reached many speech goals through music, it helps organize his brain for learning, and it’s a free form of expression where no one is judging him.”

Noreen says that Riley has developed many skills with music, and that there has been a shift from learning external, basic concepts as a young child, such as following instructions (reach up high, touch your toes etc.), to more complex internal concepts, such as dealing with difficult emotions. Music therapy can help to get difficult feelings out in the open because different instruments, sounds, and melodies can represent various emotions: the therapist plays what sounds like sad or angry music, and then they can begin to label those emotions. This has been helpful for some children, like Riley, who have difficulty with emotional processing.

Throughout her 20-plus years experience, Noreen says that she has noticed children with Down Syndrome appear to have an affinity for music, and music therapy seems to be particularly effective for helping them learn. She points out however, “For children, anytime you can make learning more enjoyable, such as within a musical context, there is bound to be more involvement, attention, and response. If a child isn’t responding to their name, for example, try singing it. Chances are they’ll look right at you!” 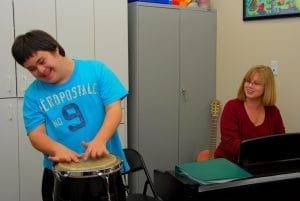 Blueballoon Health Services specializes in pediatric assessment and treatment for children and young adults (ages 0-18) with mild to severe delays or difficulties, including, physical, behavioural, social and emotional challenges, those with learning disabilities, situational challenges or children who simply learn differently. blueballoon has an interdisciplinary team with several regulated healthcare professions under one roof including: speech/language pathology, occupational therapy, music therapy, physiotherapy and psychology. There are four clinics across Southern Ontario – in Toronto, Burlington, Aurora and Waterloo.