Multitasking the Right Way: How You Can Make the Most of Your Time

There are just not enough hours in the day to get everything you need to do done. If you are like most parents reading this right now, chances are you feel guilty for taking a few minutes of time for yourself when so much is waiting. Push those thoughts away because what we are going to tell you now might just save you considerable time tomorrow. It is time to learn about multitasking the right way.

Multitasking is the act of dealing with or performing more than one task at a time.

If you are like me, you think that you are a very effective multitasker. Does this scenario sound familiar? The load of laundry you started this morning is now in the dryer, and a new load is in the washing machine. The pasta is boiling in a pot on the stove while you are stirring meatballs and sauce in another pot with one hand and are rinsing the breakfast dishes and placing them in the dishwasher with the other hand. Your cell phone is wedged between your ear and shoulder as you speak with a doctor’s office or insurance company. Your children beckon to you from the dining room table to help with their homework. You grab a pencil and rework a math problem while fighting to get coverage for your child’s treatment. Ok, maybe you are not rinsing the dishes at the same time as stirring the meatballs. I exaggerated a little, but you get the idea.

This type of multitasking results in forgetting about the pot of water to boil on the stove until it burns, finding wrinkled clothes in the dryer, and not remembering to write down the name of the person you were speaking to on the phone, or noting the time of the next appointment. We are all guilty of over-multitasking at some point.

Yes, we can multitask – but are we doing it correctly? Is there such as thing as proficient multitasking?

That was what researchers at Stanford University set out to discover in 2009. Their findings showed that the people who were the most persistent multitaskers performed the worst in a variety of tasks. Multitaskers do not focus as well as non-multitaskers. They are more distractible and weaker at shifting from task to task or organizing information.

After setting out to discover what unusual gifts multitaskers possessed that made them so successful at multitasking, the researchers found only disadvantages instead of advantages. Instead of being in control of information, they were just getting it all confused.

Other studies have backed these results, but, in the end, what it all comes down to is this – multitasking means trying to do too many things at one time and not getting any of them done properly. 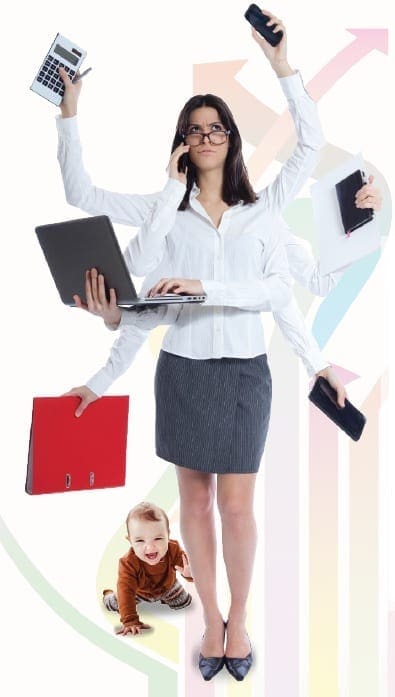 Yes, we can listen to music while reading, the music becomes background noise. Students who watch reruns of shows they have seen previously retain more of the information they are studying, researchers have found. However, is this truly multitasking? Researchers do not consider music, TV, or conversation that one is overhearing and not actively participating in, to be tasks at hand. Like the sound of a car passing by, these are auditory stimuli that go along with what we are doing.

True multitasking is literally doing two things at once, not switching back and forth between different tasks. Every time you move your focus from one task to another, you slow down your progress. That is called “switchtasking” and it is not efficient. A law of physics says that no two objects can occupy the same space at the same time. That also applies to thoughts in the brain.

No matter how many things you try to focus on at once, only one can take a dominant position. All others will receive less than 100% of your attention. Rather than switching back and forth between tasks, it is better to stick with one until it is complete. The best form of multitasking that can bring you success is “background tasking.”

What is background tasking?

It allows you to focus on completing one task that requires your attention while also doing another task that does not need you to be consciously present. Examples of successful background tasking include:

When you try to multitask all day, it causes your body to continue to pump adrenaline which builds up stress which is tied into 80% of current medical expenditures.

To improve your ability to multitask efficiently, try these simple steps:

List and Prioritize – write down everything you have to do and put them in order from the most important task to the least important. Also, assign an estimated time of completion to each task. Try to knock out a few short tasks before tackling one long one. You will feel a sense of accomplishment, and your to-do list will be shorter. You can do this on the form we provided in the box.

For example – if you have 4 tasks that must be completed by 5 pm, and 1 will take 3 hours, while the other 3 will each take 1 hour, do the 3 shorter tasks before lunch, take your break to reset your brain and contemplate the larger task at hand. Large tasks can be broken into smaller chunks. When making your list of priorities, find places for these pieces.

Schedule Your Time Wisely – Know what time of day you are most productive and schedule the hardest tasks that require the most concentration for that time. If you are not sure when you are most productive, you can monitor your efficiency over a few days. Be cognizant of when you are the most aware and energized. That is when to schedule tasks that require extra focus.

Do the Worst Task First – Putting off what you do not want to deal with only weighs you down. The sooner you complete it, the better you will feel.

Focus on the Task at Hand – Give full attention to one task at a time. Once it is complete, you can move on to the next item on your list.

Research effectively. If you have multiple projects that require internet research, do it all at once whenever possible. If you need to look up facts, supplies, purchases, or information, keep a notebook handy with a separate page for each task. Write down on each page the things you need to search and do them all at once. This way, when you begin your tasks you will already have everything you need.

Take occasional Short Breaks – You cannot continue to go full steam all day. Better functioning follows brief breaks such as taking a short walk, stretching, closing your eyes for a few minutes and meditating. Only five minutes is necessary to recharge your batteries.

Always take a break in between tasks, even if it is just for a moment or two and clear your head of the previous task. Think about what you are going to accomplish next and make a mental record of the steps you will take to tackle this.

Minimize interruptions – frequent interruptions cause you to lose focus. To avoid falling behind on your task, do not answer the phone or check emails until you are done. Close your door and try not to allow interruptions whenever possible during a task. Ask others to hold off unless something is pressing or move to a private place to take care of what needs to be done. Remember – every interruption sets you back because you have to refocus.

Delegate When Possible – Is there someone else who can accomplish any of the items on your list? This step is also about letting go. You do not have to do it all yourself, and it does not always have to look the same as when you do it. So what if your husband folded the sheets or towels wrong? In the grand scheme of life, does it really matter?

Finish one Thing Before Moving on – Whenever possible, complete an item before turning your focus elsewhere. If you must deal with an interruption, make some notes about where you left off and what you were going to do next. That will make it easier to pick back up and complete the project.

Schedule email Checks – You do not have to read and answer every email right when it arrives. Unless it is an urgent email that requires your attention, leave it until later. AT THE VERY MOST CHECK IT ONCE AN HOUR unless you are waiting for an urgent email. Even checking emails once an hour can lead to a loss of 30 to 40 minutes of productivity in a day.

Another common email slow-down is leaving read emails in your inbox. Organize them into reference folders, a to-do list, or your calendar. Act the first time you read the email so that you do not lose time and productivity reading it again.

Close Your Facebook Tab – Social media is a dangerous habit that can eat away at a large portion of your day.

Take Your Time – Rushing through a task can lead to mistakes. Slow down and concentrate on getting it done right the first time. Having to redo a task because of mistakes doubles the amount of time you spent on that task.

Try doing tasks that involve two types of stimuli, such as visual and auditory tasks. If you try to do two visual tasks at the same time, such as sending an email while writing an article, your brain can get overwhelmed. This can slow down your productivity. Instead, try “layering” which involves choosing tasks that utilize different types of stimuli. Layering allows you to combine one task with another, based on the different channels of mental functioning they require. We are talking about visual, auditory, manual, and language.

If it seems as though you never have time to clean your house, exercise, connect with friends, or deal with important issues, try the layering techniques below. 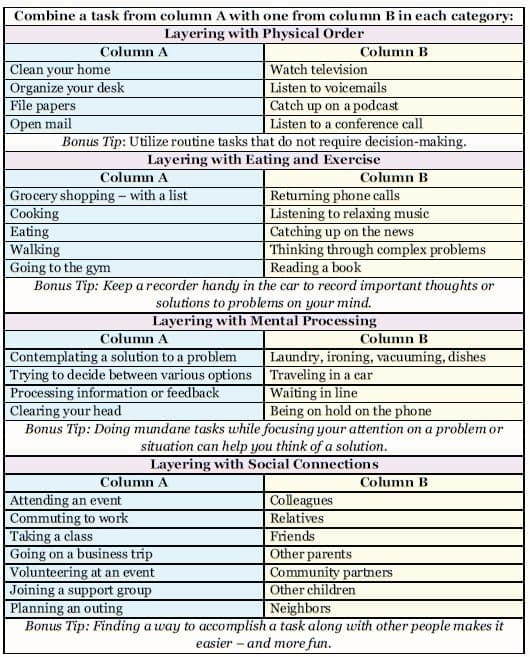 Final Bonus Tip: Carry pen and a small notepad with you at all times – oh the benefits of a purse! This way you can jot down ideas and solutions the minute you think of them. Reviewing information before beginning a task can maximize your effectiveness.