One question most parents ask themselves is whether or not they should require their kids to do chores and, if yes, what is the best way to go about it? The answer to the first part is a resounding: “Yes!” Experts agree that asking your kids to help out with household tasks not only enhances their self-esteem and sense of responsibility towards others, but it also strengthens your internal family bonds. “By assigning chores,” says Dr. Patricia Nan Anderson, a professor of early childhood education, “you let your child feel competent, capable and valued.” Dr. Richard Rende, a developmental psychologist, agrees, adding that “it contributes to family cohesion when there’s a feeling of everybody trying to help each other and take care of each other.”

More broadly, research shows that one of the best predictors of how well kids do later in life is if they did chores when they grew up. In a study conducted over 25 years, researchers found that kids who started doing chores at age 3 or 4 had more satisfying relationships with family and friends and were more successful in their careers two decades later than their non-chore-doing peers. Julie Lythcott-Haims, former Dean of Undergraduate Students at Stanford University, sums it up well: “Making kids do chores – taking out the garbage, doing their own laundry – they realize ‘I have to do the work of life in order to be part of life. It’s not just about me and what I need in this moment, but that I’m part of an ecosystem. I’m part of a family. I’m part of a workplace.’”

If, as research shows, doing chores is so vital to kids’ personal and professional development, the question is how should you go about making them do it?

Experts agree that the most important thing is to create an actual chore system rather than assign chores on an as-needed basis. Jim Fay, author of the bestselling parenting book, “Parenting with Love and Logic,” says that you should “create a list of every job it takes to keep a family going.” Dr. Tom Brunner, a child psychologist, agrees, noting that this list should include everything that needs to be done, “from garbage to yard duties to getting the mail.” One of the main advantages of such a list, Dr. Brunner says, is that you won’t need to remind your kids what to do. Instead, it teaches them accountability by requiring them “to go to the chore list and get things done on their own.”

Once you have created this list, call a family meeting to decide who does what. When assigning chores, it’s not only important that chores are distributed fairly and that your kids have a say in the matter, it’s also important, as Dr. Nicholas Long of the Center for Effective Parenting emphasizes, that the chores assigned to your kids benefit the family as a whole, rather than their simply their own well-being. This will help your kids understand that doing chores is about supporting the greater good, not just themselves. For example, it’s better to have them vacuum the living room or the den than their own bedrooms, for example.

You also need to decide as a family when chores should be done. Here, experts agree that the best solution is to tie chores to particular events. Dr. Brunner recommends that you correlate chore deadlines with what he calls naturally-occurring family “rituals” (breakfast, lunch, dinner) or “transitions” (getting up in the morning, going to sleep at night). As Dr. Brunner notes, this “makes it easy for you and your child to remember when any one chore should be done.” Another useful way of creating chore deadlines is as what Dr. Eileen Kennedy-Moore, a child psychologist, calls “when/then routines”: “When your children have hung up their coats after school, then they can have a snack. When they’ve put their dishes in the dishwasher, then they can go play.”

Finally, explain to your kids precisely how they’re supposed to do their chores. It might sound unnecessary but kids – especially young kids – need to be told, as Dr. Anderson says, “what it takes to do it and how to tell it’s done.” Here, most parents are lacking. According to Dr. Long, “parents don’t spend enough time on being specific about what exactly the chore entails and even demonstrating how to do it and how to do it properly.”

Whatever the ultimate result, it’s important not to scold your kids but instead praise them for their efforts. Scolding your kids about how they do their chores is not only likely to engender resistance on their part, it won’t get them “to embrace their role as valuable contributors to a smoothly running household,” as Dr. Kennedy-Moore puts it. 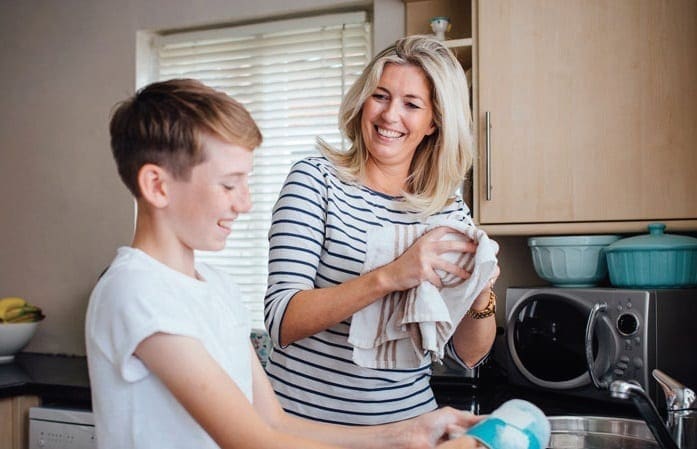 What to Expect When Establishing Expectations