Positive behavior support transformed the life of our son, Richie, and our family as a whole. This article will share our experiences as we developed a better understanding of Richie’s behavior and created an effective plan for addressing it.

Richie is 14-years old. He is affectionate, attractive, energetic, and has a contagious laugh. Richie also has autism. Richie uses only a few words, expressing his needs through facial expressions, gestures and leading. He is delayed in his ability to care for himself and his surroundings. We have always tried to stay engaged in family and community life, but Richie’s challenges have made this difficult at times.

Recently, Richie’s challenging behaviors began to escalate. He was hurting himself and others and damaging property. He would bang his head and bite himself, scratch, hit, kick, and pinch others, and slam or break items. The people who love Richie most – his family (from two different households since his father and I are divorced) and educators – decided to initiate a process of positive behavior support to resolve these problems.

Our Goals for Richie

Although we clearly wanted to decrease Richie’s problem behaviors, we were even more interested in improving his quality of life. We used a tool called the PBS Quality of Life Assessment to guide us and gained consensus on our vision for Richie. These goals provided the focus for our efforts.

Richie’s behaviors were consistent regardless of the circumstances. He would moan, pace, and/or shriek and then proceed to aggression, property destruction or selfinjury if his needs were not immediately met. These were the four patterns that contributed to his behavior:

Richie is told to put away or denied access to his iPad – his behavior results in the iPad being returned, sometimes after a brief delay or redirection.

Richie is asked to perform a task (e.g., self-care, initiate a new activity at school) – his behavior results in him being removed from the situation, the task being delayed, demands reduced, or him getting help with the task.

Richie is exposed to sounds that bother him (or possibly a repetitive activity) – his behavior results in sensory stimulation as adults try to soothe him (e.g., with singing) or engage him other activities in an effort to calm him down.

Related: Ever Wonder What It’s Like to Experience Sensory Overload?

A preferred adult’s attention is focused elsewhere or Richie is not socially engaged – his behavior results in attention (or a preferred activity or item until their attention becomes available). 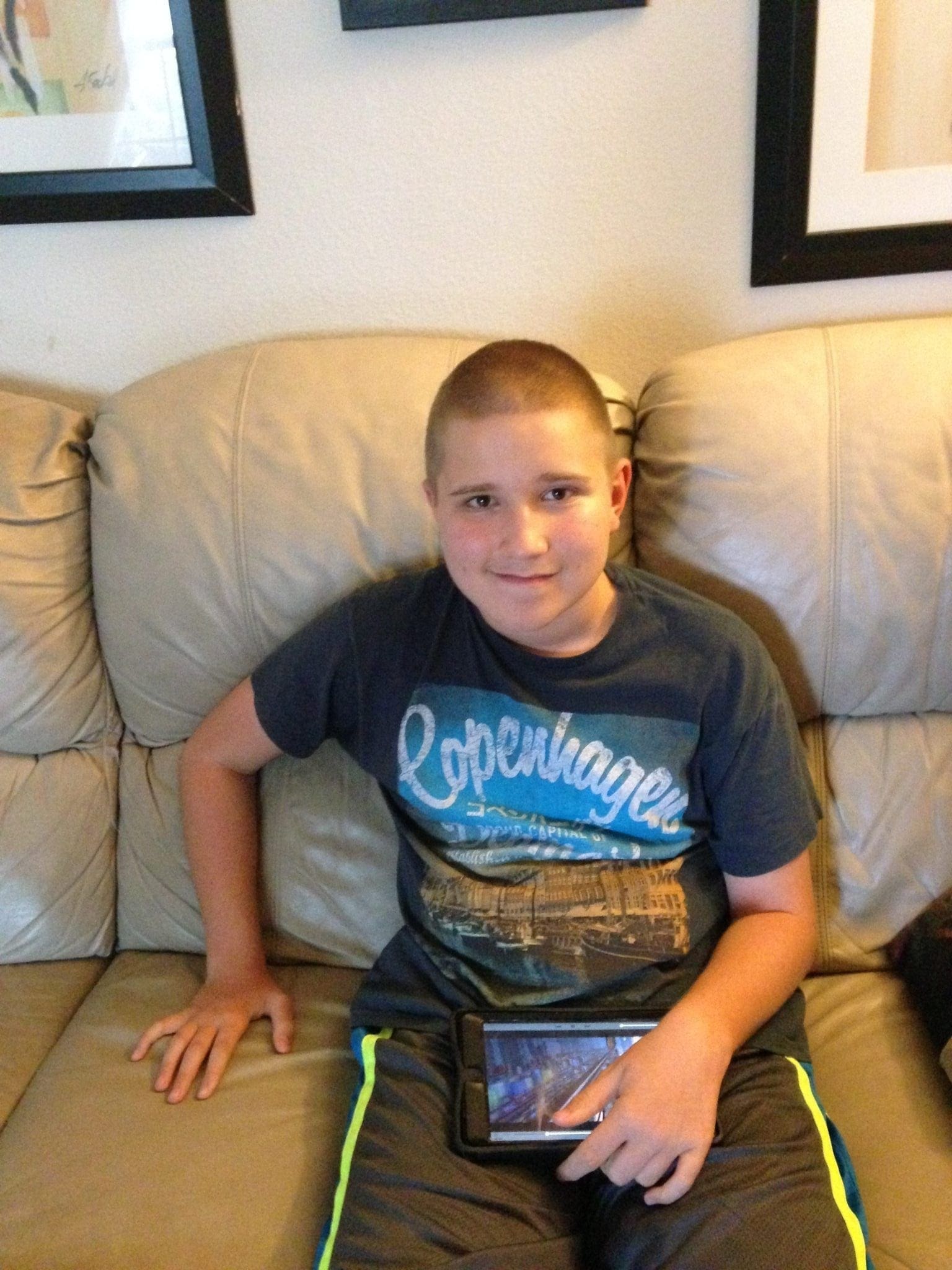 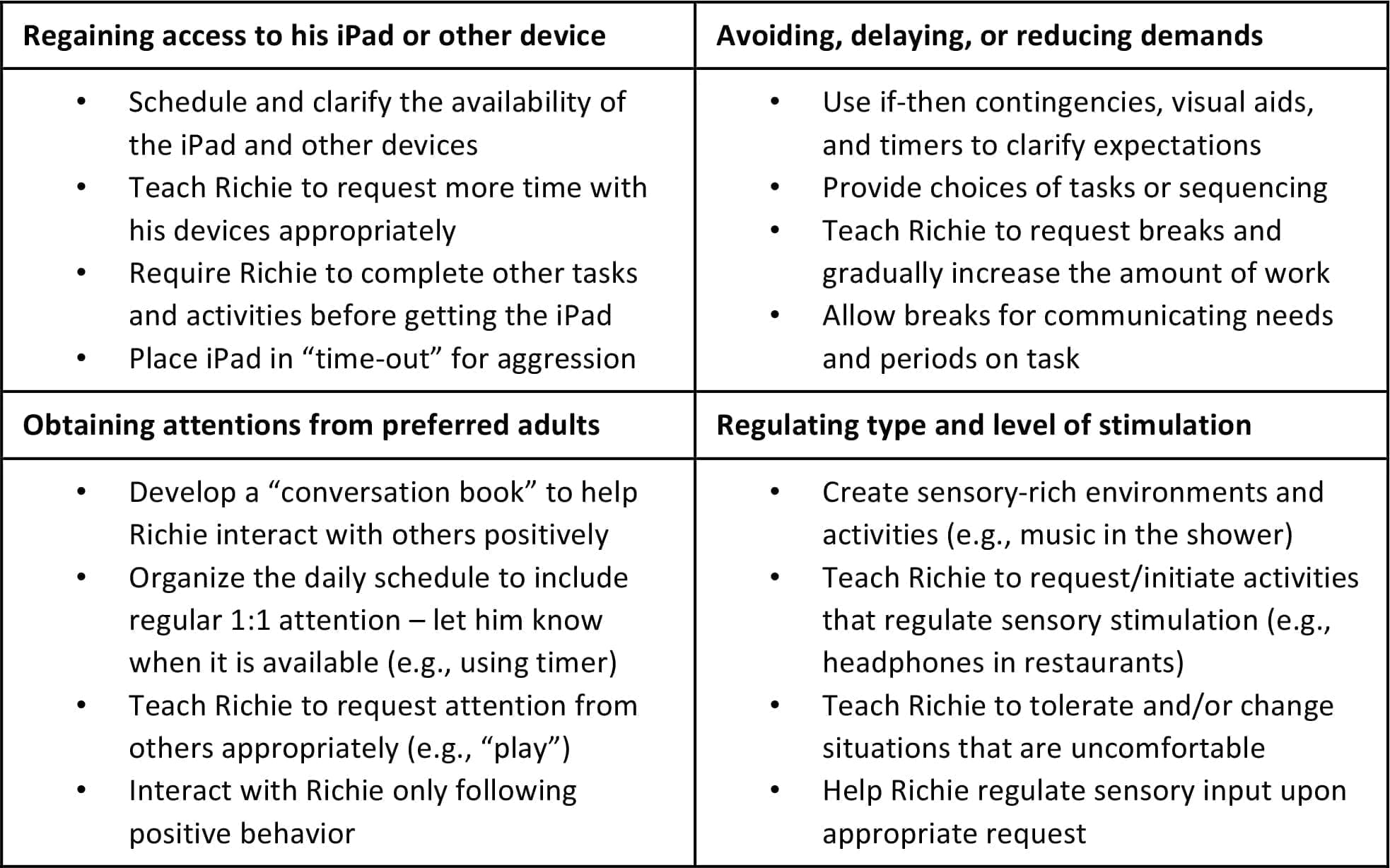 Given the number of people involved in Richie’s life, we needed to be systematic in putting the plan in place. We shared information over the phone and email while working through the process and then arranged a meeting at Richie’s school to review the patterns and brainstorm the strategies above. We then began putting the strategies in place by working the basic strategies into regular routines that were particularly important and challenging such as bedtime, after school, and going to the supermarket, football games, and other community events. We recognized that, whereas we wanted the overall principles of the plan to be consistent, we needed to do things somewhat differently at school, in the community, and our different households.

Related: Getting Involved with Positive Behavior Support at Your Child’s School

For the first few weeks, Richie responded very well to the plan, but then we ran into some challenges. Some of our team members had experienced difficulty in implementing parts of the plan and adjusting routines to fit Richie’s needs. They did not have some of the resources and tools that would support the plan at their fingertips. Therefore, I shared my pictures, books, and other templates, making it easier for others to initiate and maintain the plan. 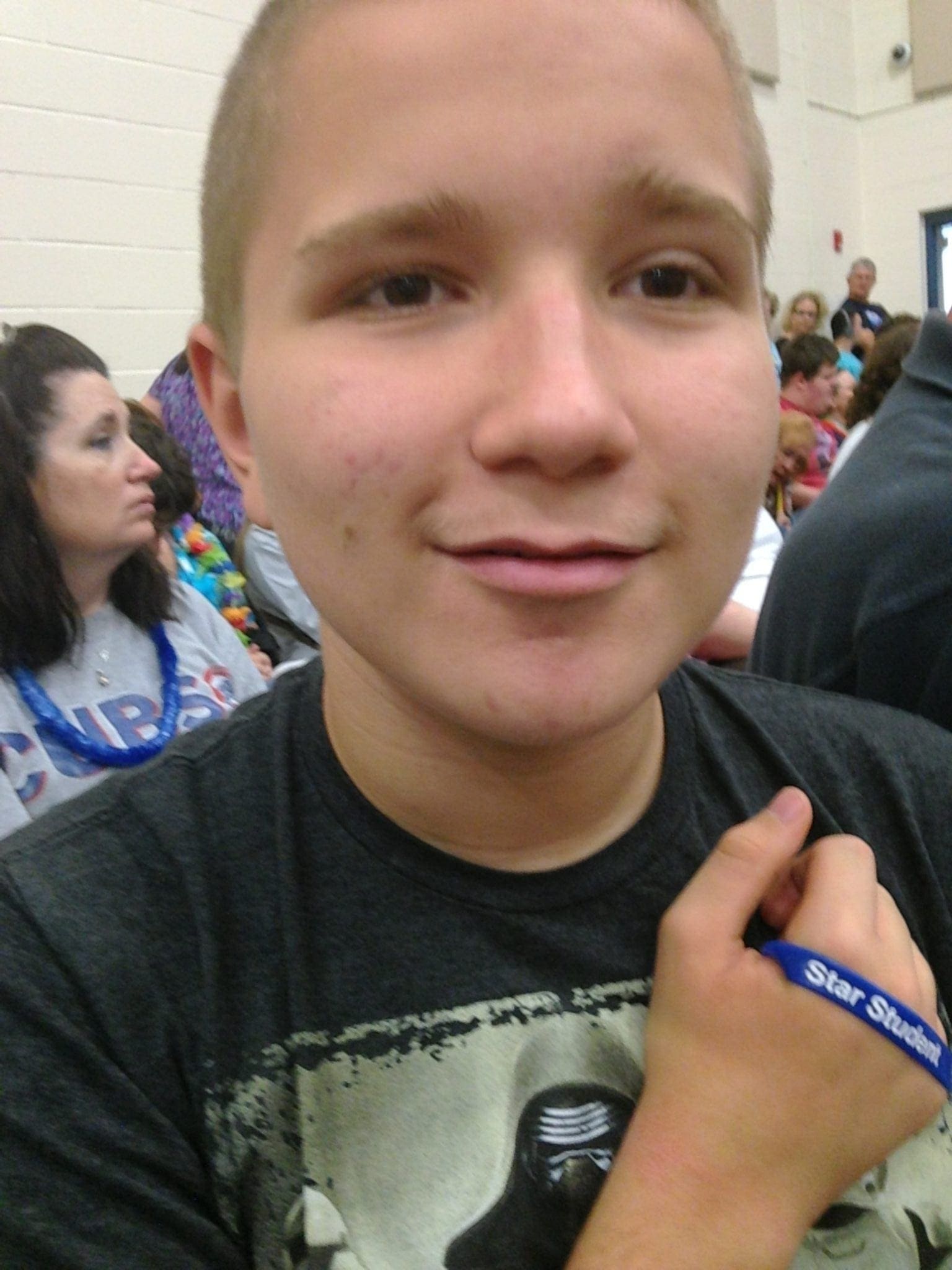 It was exciting to see how quickly Richie responded to the plan. The data on Richie’s aggression from the first several weeks is displayed in the Frequency chart.

In addition to experiencing reductions in his aggression, Richie became more communicative and engaged. He began using a wider variety of words to communicate his needs and more than doubled the number of chores completed each week. We started teaching him to do new things such making his bed, matching and rolling his socks, and changing out his toilet paper roll. At his Dad’s house, Richie assisted with cooking, following recipes supported by pictures. We found that Richie was interacting with us – and with life – in a more positive manner. All of a sudden, we realized that there were so many other things we could teach Richie – skills we may have never even considered before PBS. The changes in Richie’s demeanor were the most noticeable and profound of all the outcomes. He began to smile and laugh more and he just seemed jovial – a sharp contrast to his previous mood and behavior. I like to think of our positive behavior support plan for Richie as a living document. It will continue to change and evolve as Richie develops new skills and continues to progress. We know to expect a few hiccups along the way when circumstances change, but I think we have a pretty good handle on how to address them collectively. We’ve seen the benefits of a team-based approach to PBS. We constantly are learning about who Richie is, what he desires, and what he can do. We are meeting Richie for the first time in fourteen years, and it has made all the difference.

Meme Hieneman, has a Ph.D. in Special Education and is nationally certified as a behavior analyst. She has published a variety of articles, chapters, and books including “Parenting with Positive Behavior Support: A Practical Guide to Resolving Your Child’s Difficult Behavior.” In her professional career, Meme has worked with children with severe behavior problems for more than 20 years.