Getting Ahead of the Game: Changing Behavior and Family Life

Amy was five years old, an only child living with both parents. Although Amy had some wonderful strengths, moments of thoughtfulness and calm only punctuated her otherwise difficult-to-manage behavior. Amy ignored instructions, made unreasonable demands, invaded other people’s personal space, said inappropriate things, and hit, kicked, and screamed when angry. Her behavior problems were much more serious and frequent than other students in the exceptional education preschool she attended.

Her parents and teachers tried repeating instructions and warnings, removing privileges, pleading or negotiating, and time-out to no avail. When these approaches failed, and Amy’s parents saw her in distress, they would often eventually give in and provide Amy with affection, comfort, and reassurance. Because of Amy’s behavior, her parents avoided most social settings because they tended to prompt altercations with peers and adults. Despite impressive academic improvements within the exceptional student environment, Amy’s teacher could mainstream her only for short periods of time. Her chance for succeeding within a general education setting in first grade was in doubt. Her mother said it was as if Amy was fighting her way through each day and all they could do was to react to problem after problem.

Amy’s parents sought help through a variety of sources, including doctors and educators. Finally, they were introduced to a program designed to guide parents through a positive behavior support process and give them the skills to resolve their own difficulties. When first starting the process, Amy’s parents recruited people key to Amy’s daily routine to work together with a common goal: helping her succeed behaviorally. Their team was made up of Amy’s parents, teacher, teacher assistants, bus driver, grandmother, and extended family and, of course, Amy herself. The team developed goals for Amy that included completing simple daily routines in a timely fashion, following instructions and accepting limits, and improving her academic performance. They wanted Amy to develop meaningful friendships and for the entire family to enjoy community outings. All members of the team were committed to improving Amy’s quality of life and joined forces to address the challenges facing Amy, her family, and the professionals working with Amy.

Amy’s team was guided through an informal functional assessment involving interviews and observations. This information gathering was designed to pinpoint triggers and outcomes of Amy’s difficult behavior. The specific patterns the team identified were:

When adults were occupied with activities like talking on the phone or working on the computer, Amy engaged them by interrupting with requests, taking the object with which they are working or physically invading their personal space. This escalated to more physical contact; climbing onto laps, or a hit or kick – each time with a response from the parent. Soon thereafter, Amy lost privileges or got physically restrained. Once Amy calmed down, the adults sat down with her to discuss the incident.

When Amy was asked to do something, especially during preferred activities or if the adult’s tone was overly directive, she complied briefly. She then disregarded the request by mocking, making strange noises or expressing affection. The adult persistently repeated the request, providing more detail or demonstration until the task was accomplished.

At school when Amy was in an unstructured environment such as recess or a group activity, she would refuse to comply with requests from adults by mocking or yelling. When adults were at a distance, Amy corrected classmates– often children smaller than her. She would also hit, kick, and push them. This pattern of behavior resulted in Amy being removed from the activity and being placed in time-out.  While in time out Amy received individual attention and counseling regarding the incident.

The information, or data collection, made it clear that Amy’s behavior was effective and efficient in producing extended 1:1 attention.

The Plan After acknowledging these patterns, Amy’s team agreed to make specific lifestyle changes.  Instead of being ready to react to disruptive behavior, the team would proactively prevent problems.  Before any potentially difficult routine, Amy’s parents and teachers would offer clear explanations of the events that would follow and precisely what kind of behavior was expected of her. When Amy behaved as planned, the adults enthusiastically rewarded her and withheld their attention for disruptive behavior. 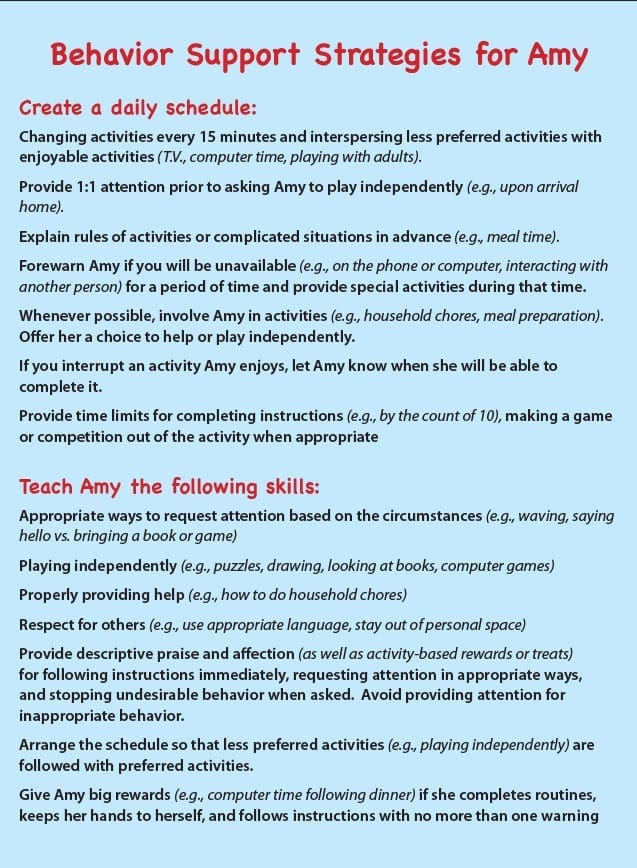 To remind themselves to be more proactive and positive, Amy’s parents started to “scrum” (i.e., review and rehearse expectations) prior to challenging activities. The rest of the team served as a sounding board to helped them identify extracurricular activities and arranged play dates with neighborhood children for Amy and then provided coaching so Amy could successfully interact at home, school, and in the community.

As Amy’s behavior improved, her parents, teacher, and other caretakers set bigger goals – and provided bigger and longer-term rewards (e.g., going to Disney World) when Amy met their expectations. They taught Amy to develop and follow her own daily schedule. The team was also able to generalize the strategies and apply them to new, and often more integrated, activities and circumstances.

Once the plan was in place at home, school, on the bus, and other settings, Amy’s parents could not believe the immediate turn-around in Amy’s behavior and her newfound willingness to cooperate with the new routines. For example, they were able to enjoy dinner together because Amy remained seated, ate her food, and participated in conversations. Amy became increasingly independent as she learned ways to entertain herself. At one point, she approached her father with a drawing she had created and proudly said, “Daddy, I was bored so I drew you a picture.” Amy came to realize that finishing less pleasant activities (e.g., picking up her toys or busying herself while her mother took a call) meant she could do things she liked and that she could get attention through positive behavior. She developed friendships and successfully participated in recreational activities. Amy’s ability to cooperate helped her excel in school. Learning, success and positive interactions became rewarding for Amy and led to opportunities for mainstreaming (into a regular kindergarten classroom) and community participation. Her parents became more confident and enjoyed community outings with their daughter. When disruptive behaviors did reemerge, rather than feeding into them by getting frustrated, upset, or reverting back to the previous strategies, Amy’s team members took a step back and reevaluated the situation. In doing so, they were able to determine if there were inconsistencies in following the plan or if modifications were necessary.

Looking back, Amy’s parents and teachers reflect on the ingredients leading to these positive lifestyle changes.

You must take the time to truly understand why behaviors are occurring. If you can say…. “My child does this (insert negative behavior here) when this (insert the situation here), you can identify strategies that will produce immediate and durable change.

You must be willing to change your behavior (including how you communicate with others and your child) because what you do may serve as a trigger or reward for your child’s behavior.

You must shift your style from simply reacting to problems to being proactive. This means anticipating difficult circumstances and clarifying expectations before problems occur, creating greater predictability for your child.

You must work together, engaging everyone who has responsibility for your child and coming to agreement on long-term goals and more immediate plans and strategies. Everyone must commit to a consistent approach and communicate regularly.

You must be prepared to go back to the drawing board when new behaviors or when challenging situations arise. PBS is not a one-and-done approach; it requires ongoing problem-solving.

Positive behavior support, when implemented holistically, doesn’t just benefit the focus child; it produces positive dividends for the entire team. In Amy’s example, it lead to a dramatic decline in the family chaos and fostered a greater degree of harmony in the household, classroom, and community. Amy’s family and teachers are looking forward to a very productive first grade, with Amy fully mainstreamed with her peers.