How I Navigated My Child’s Transition: Sandra Cariker

Family Snapshot: My name is Sandra Cariker, and I’m married. Our 13-year-old son is Nathan. He has an intellectual disability. He also has epilepsy. His IQ is about 40, so he’s a little bit on the lower side. He has his other struggles, ultimately (behavior), residential placement seemed like the only option for us to be able to help Nathan long term.

Listen to our Podcast: Navigating Transitions How I did it!

Our Transition Experience: In 2015 Nathan started going to the Bradley Hospital, it’s a local hospital in Rhode Island. It’s a Pediatric psychiatric hospital. They do have a special needs unit. We did that on and off for about a year, but it came to a point where we just couldn’t keep him home with us anymore. He’d come home for a day or two from being at the hospitals and just be so aggressive and violent. I would have black eyes, bloody noses and was constantly being bitten. At times I would even have to hide in the bathroom until my husband could come home. Eventually we had to send him back. It was a very, very difficult time. I kept telling myself “I will keep him home forever.” But it just wasn’t feasible. He wasn’t safe, and I wasn’t safe.

When your son, who is 13 years old but developmentally four, would you leave your four-year- old and say, “I’ll be back in a couple of days?” You don’t do that. So the transitioning for me was very difficult. It was very hard on Nathan as well. But making the decision as a family unit was even harder. My husband and I were on two different ends when we finally made the decision. I was for it, and my 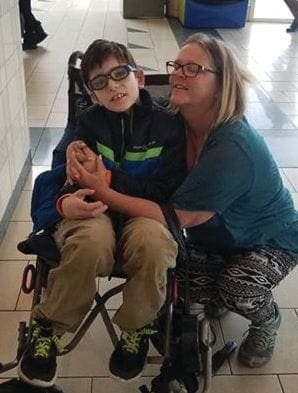 I just felt like God had better things planned for Nathan. He wanted Nathan to thrive and be accepted in the community, and I couldn’t do that for him. Now he goes places, he works at a grain house.

Things that I could never do for him. Nathan is a lot more active and it’s amazing. For instance, today they’re going to a splash pad because they’re on vacation week this way. Nathan still has tough times, but its more structured for him. Nathan does chores there as well. He loves to vacuum, and he sweeps the kitchen after every meal and washes the table after every meal. When I heard this I was like, “Who is this kid?”

We still see Nathan on a regular basis. And he knows I go see him a few times and then we do take him out every single Sunday. Never missed a Sunday. there are certain things we like to do on Sundays and that’s going to get a Blizzard ice cream from Dairy Queen. And he gets a Sprite

My biggest fear with this is that he would ever feel that I abandoned him. That held me back for a long time from doing this. He was just under 12 when he went in the house, so it’ll be two years in December- I know that Nathan is in a safe place. He’s in a good home, has great staff helping him and he’s happier.

And again, I say that now because we’ve gotten to the point where it’s total acceptance. My friend is going through it right now and I’m just telling her the hardest part is letting control go and realizing that it really is the best thing for them. And now I can enjoy my son. I go see him and he’s so happy to see me, and he’s kissing on me, and loving on me instead of trying to hurt me. This transition started off rough, but it got better and now both Nathan and our family are in good places through it all.

Read: How I Did It! Navigated My Child’s Transition: Erin Harris

Read: How I Navigated My Child’s Transition: PJ Nein