A Life Full of Flies 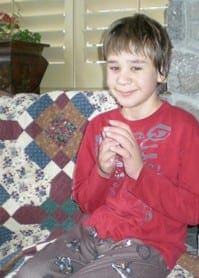 We must get rid of the life we had planned so as to have the life that is waiting for us. –Joseph Campbell

The baby monitor next to my bed crackles as sounds emerge breaking the quiet of night and pulling me up from my dreams. Instinctively I reach to turn up the volume. I hear a long groan broken up by gasps. Fear grips my heart yet my mind clicks in to action.

“Rick.” I push my right hand firmly against his warm back as I leave our bed. “Davis is having a seizure.” I grab my terry cotton robe and move quickly down the stairs from our bedroom loft to Davis’s bedroom door at the landing below.

My twelve-year-old boy stares forward with vacant eyes. His body lays frozen beneath his comforter, his neck and back arched. The groans stop and Davis’s breath disappears, hiding, until the next phase of the event. I gently lift his head and slip my legs in beneath him cradling him while we wait. With a cadence designed to keep my own breath constant I start to sing. Rick stands near Davis’s feet and stares at his watch which he had the sense to grab off the bathroom counter. We track the seizure length and know at a certain point if too much time passes we will have to call 911.

“I know an old lady who swallowed a fly, I don’t know why she swallowed the fly. Perhaps she’ll die.” I choke on this last word. In better times Davis chuckles when I raise my voice in exclamation. Perhaps he finds the inflection of my voice entertaining, or perhaps his simple mind can grasp the absurdity of the scenario as the lady proceeds to swallow more and more to catch that first piece of discomfort.

Rick counts,marking the slow passage of time. “Come on baby.” He murmurs.

“I know an old lady who swallowed a spider that wiggled and giggled and tickled inside her.” Soon, as the story goes, the lady swallows a bird to catch the spider intended to catch that original fly. Davis’s lips remain still, blue. Our brown dog Lucy rests her chin on our son’s legs. Her brown eyes keep vigil over her charge. “Good alert Lucy.” I tell her, for we are still in training. “Good alert.” Her expression seems to show bewilderment and concern. “Two minutes.” Rick announces while stroking our frozen son on his thigh. A quilt covers Davis, one of the first I made. The pattern did not turn out because I accidentally omitted a row of strips and boxes that played an important role into the total theme. I keep the quilt near Davis because he too is missing a row of bits and pieces that would have created a different boy had they too not gone missing.

“I know an old lady who swallowed a dog. Oh what a hog to swallow a dog.” And on we go as time passes by. “She swallowed the dog to catch the cat…” Breathe Davis. Breathe.

Finally the expulsion of his breath, long and ever so slowly, his eyes remain unfocused but his lean body slides off from a stiff arched pose and phase two brings on the twitching and body convulsions.

We wait, whispering in his ear. Rick keeps his vigil on the watch. “Three minutes.” The body beneath the comforter stops moving, gradually, then comes the stillness. Davis looks up into our faces, his blue eyes shifting their gaze between mom and dad with a look of sadness and exhaustion. I wonder what my son comprehends about the hot electric storms that fire up in his brain.

Our dog makes her way up and onto the bed to nestle in beside Davis’s feet. My son reaches for me and we sit together, my arms locking him onto my chest while his blond short hair bristles against my cheek and together we lean into the pillow. He feels warm, too warm.

“Tylenol.” I call to Rick as I gently stroke Davis’s head. “This feels like something coming on.” Rick returns from Davis’s bathroom with red liquid in a spoon which he holds up to Davis’s mouth. “Here pal.” And Davis complies.  He always complies. Whether the spoon contains his four seizure pills tucked into applesauce, or his anti-biotic or his pain medication, Davis opens his mouth and accepts whatever comes his way.

I wish I could do the same with as much grace as my son.  I am one of a million moms tending to a child with severe medical issues, one of a million caretakers wishing I too could plan a day without wondering whether the fates will allow me such luxury. So many of us are tending to butts, wiping and diapering a tush bigger than our own and so many are huddled alongside their ward in hospitals or waiting rooms. Recently, when I felt overdone by the seizures Davis continued to have about once every ten days I heard from a mother who called me from the hospital where her own child with the same genetic disorder as mine was fighting for his life. Her son experienced 170 seizures a day, of a different type, but still one hundred and seventy! I stopped complaining.

Because I am a regional rep for our genetic deletion support group, new moms often call me when they first receive what they believe is a catastrophic diagnosis -a deletion on the twenty second chromosome called 22q13.3 or The Phelan McDermid Syndrome. PMS for life. I listen, I hear their pain. I have walked along those same forlorn shores wondering how to get back to familiar terrain. Many are not yet ready to hear that the tides will be pulling them elsewhere. I am careful of what information I pass along until I can gauge the parent’s level of acceptance and denial for each balances against the other at various stages in the journey through the tipsy topsy arena of special needs.

I want to say ubiquitous, so much the same, for so many years. I cannot even offer up our own twisted version of compliance until I come to understand what it is they are facing and how they are choosing to respond. Rick and I try to keep a sense of humor. I cannot be ignorant of another’s pain, or of our own, but when circumstances allow I offer up the possibility that these cherubs come with a silver lining. My son’s smile beckons even the grumpiest of those we meet to smile back

Like the old lady gulping down one quick solution after another to chase her original discomfort, I too swallowed my own barnyard and ended up with a belly ache and gas. Sometimes I would reach for a quick fix, like hard biting words to fight off what I did not want to hear. Perhaps I turned on too much television or opened the refrigerator a bit too often. The quickest way to squelch the fly is to uncork a bottle, and this too carries the chaser of melancholy that comes when we take in a depressant such as alcohol.

One of the first pieces of advice I give to new moms is to settle in with the fly. In the early hours of dawn while the world sleeps and my mind wanders, I meditate. I may write or draw out my one of my many flies. I may diagram dreams or color up images on blank journal pages. I connect and allow myself to acknowledge what my mind or perhaps my soul beckons me to see. When Joseph Campbell invites us to let go of the life we had planned so as to be able to have the life that is waiting for us, the life that is waiting for us is the one with the fly.

When Minutes Feel Like Hours: Recognizing and Responding to Your Child’s First Seizure