The Most Valuable Sticker: I Voted

For most of us, voting in an election seems more important today than in any previous time in our lifetime. Although many people are particularly outspoken about sharing their political views, the best way to exercise your most fundamental democratic right can be found at the voting booth. Every single vote counts the same whether you are a business tycoon or a minimum wage worker. The 19th and 20th century focused on efforts to reduce barriers to voting for underrepresented groups, however, turnout for voters with disabilities remains significantly lower than the general population. When people with intellectual and developmental disabilities are not given opportunities to exercise their right to vote, they have no voice in electing officials who support policies that will be to their benefit. This leaves them disenfranchised as a voting bloc and marginalized in the democratic process.

Last year, Sarah Lineberry and Matthew Bogenschutz from Virginia Commonwealth University examined information from over 1,600 adults with intellectual and developmental disabilities (IDD) about their opportunities to vote and voting habits. They found that people with IDD are among the least likely to vote and that there is an inverse relationship between voting and the level of a person’s support need. This means that the more support a person needs, the less likely they are to make their voice count in electing officials who will work towards issues that are important to them, like accessibility, public transportation, affordable housing, medicaid waivers, and special education.

Although everyone may not exercise their right to vote, it’s critical that everyone, including people with disabilities, have the opportunity to cast a ballot. Although every state has different requirements regarding who is eligible to vote, people of all abilities can and should vote. According to the Lineberry and Bogenschutz research, people with IDD are more likely to vote if they are involved with self advocacy groups which may also boost their confidence. Advocacy groups also help provide information about current issues and understanding their rights. If self advocacy groups are not an option, the research also suggests that being a member of a religious organization or having an active social network of people with and without disabilities supports participation in voting.

Not surprisingly, families who engage in political discussions are more likely to have children who are voters. However, don’t make the assumption that your child will automatically adopt your political views. According to a study published in the British Journal of Political Science, children who come from homes where politics are discussed are more likely to feel confident talking about candidates with others, which can expose them to new viewpoints that they may adopt instead of the ones learned at home. Taking your child with you to vote, or talking with them about your choices as you complete an absentee ballot can also encourage future voters.

Of course, we want our children to cast an informed ballot. One of the best resources for people with disabilities about voting is from the website SABE: Self Advocates Becoming Empowered: https://www.sabeusa.org/, The website contains a Voter Education Took Kit as part of SABE’s GO VOTE campaign. SABE offers plenty of creative strategies to become an educated voter, such as reviewing a sample ballot prior to casting a vote. They also encourage talking to others, and listening to a variety of TV and radio programs which may offer opposing viewpoints. This will require some practice in making choices, which is a critical skill for so many children with disabilities. Making everyday and meaningful decisions about what to do during the day, how to spend money, and having a key to your own front door are also contributors in becoming an empowered future voter.

There is always a lot of advertising and public awareness before the first Tuesday in November, but don’t forget that participation in the primary elections helps determine who is on the November ballot. Candidates rarely miss an opportunity to talk to any interested group. If you or your child have an opportunity, ask a candidate about where they stand on disability issues that are important to your family. Also, observe the candidates on how they talk with and about people with disabilities. Are they using person first language? Do they dismiss people with disabilities with a pat on the head rather than a recognition that they are speaking to a serious potential voter?

People with disabilities should no longer have a limited voice in American democracy. We, as family members, can support them early so that they can grow toward becoming informed and empowered voters for change that will create inclusive communities that are better for everyone. 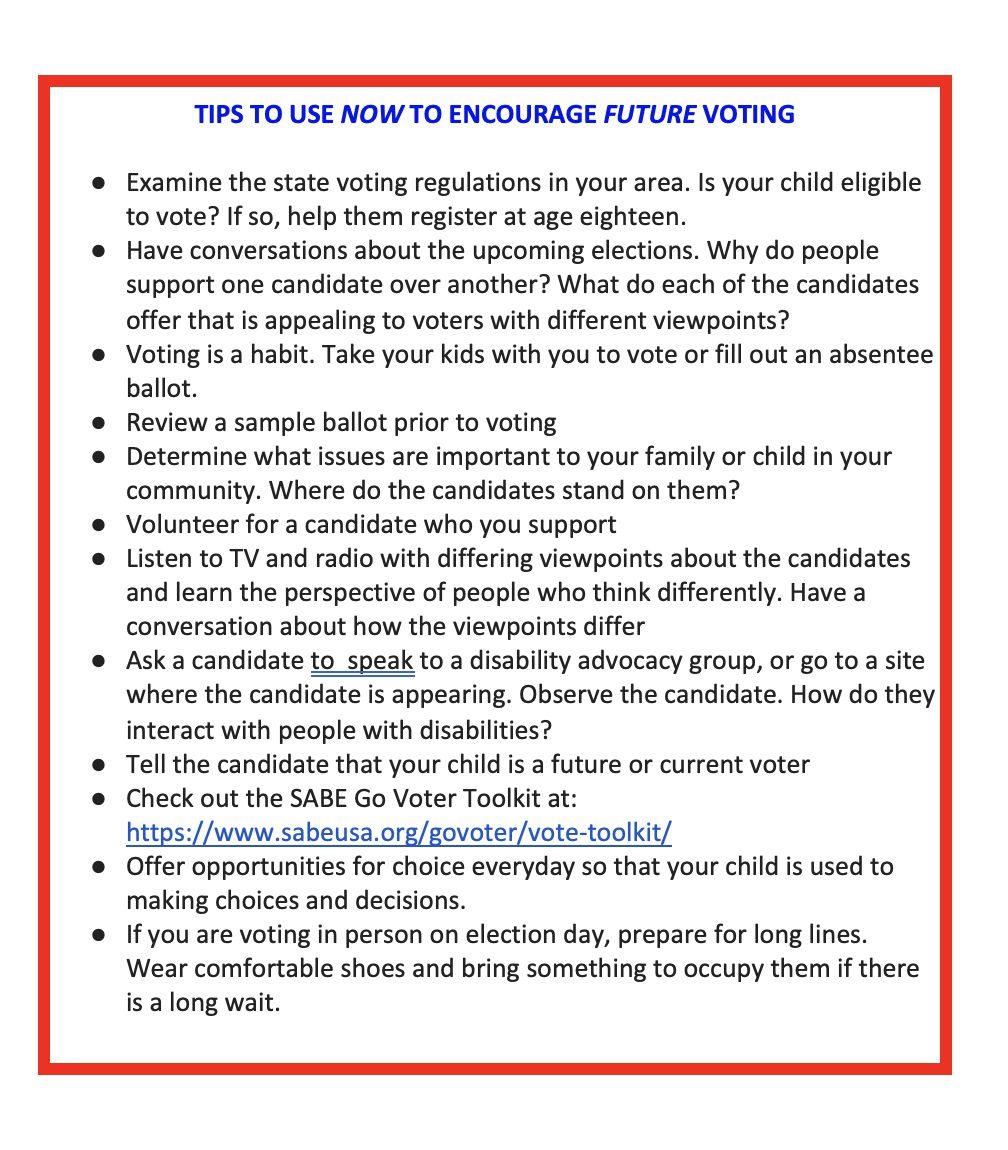 Check out the SABE Go Voter Toolkit at: https://www.sabeusa.org/govoter/vote-toolkit/

Lineberry, S., & Bogenschutz, M. (in press). Disenfranchisement and voting opportunity among people with intellectual and developmental disabilities. Journal of the Society for Social Work and Research. https://doi.org/10.1086/717/59.

ABOUT THE AUTHORS:
Molly Dellinger-Wray, MS Ed.,and Parthy Dinora Ph.D, are part of The Partnership for People with Disabilities at Virginia Commonwealth University, a University Center for Excellence in Developmental Disabilities. Molly and Parthy are both parents of wonderful boys who benefitted from special education services.