Person-Ventured Entrepreneurship: How Do You Define Viable?

How Do You Define Viable?

Before anything else, let’s first explore the definition of the word “viable.” According to Webster’s Dictionary, vi·a·ble is defined as “capable of working successfully; feasible”. I like this one, “capable of living or of developing into a living thing.”

Why address the meaning of viable? Notice please that a significant piece of one’s idea of viability is one’s idea of capacity, or in other words, your definition of “viability” will hinge heavily on whether or not you ‘assume’ someone is capable of something, or not. If you recall back in our first article we spoke about how “person-centered planning” assumes competence 100% of the time. Not sometimes, always!

Persons with disabilities are in a constant struggle to demonstrate and reflect their capacities in a way we can understand. Notice I state, “in a way we can understand.” We believe that every person with a disability demonstrates capacity constantly, in times in the most micro of ways. But at times, we get so caught up in the world’s definition of capacity, or capable, or viable, that we miss the clear demonstrations of capacity from our loved ones.

Remember the example once again from our first article of this 4-part series. How many of you would define a young man as ‘capable’ if you heard his family say that all they have ever seen him do independently is fold clothing. Unfortunately, the family themselves saw this activity as less than capable, and thus never entertained that their son could ever own his own business. Nonetheless, collecting, washing, drying and folding clothes for clients in their neighborhood was without a doubt, viable.

Viability must break the chains of ‘perceived’ capacity. If we measure the viability of a micro-enterprise for a person with a disability, exclusively based on their current ‘perceived’ capacity, then unfortunately, self employment will continue to be a non-viable venture for millions around the world. 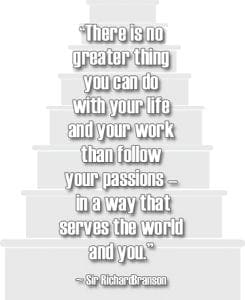 How Do You Define “CAPABLE?”

Let’s talk about real life case of testing the definition of ‘viable’ for a young girl with disabilities. Pavna, a young 23 year-old entrepreneur with quadriplegic cerebral palsy, was featured on Ted Talks, as a co-designer of a language app for iPads. Now, what is remarkable about Pavna’s story is that since she was born, she had never moved or spoken. Ask yourself, “how would you measure “capacity” if you had met someone like that”? Do you know someone like that, and assume that capacity is at zero? We hope not… 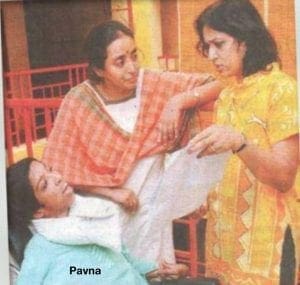 It took someone, by the name of Ajit Narayanan, to look beyond ‘perceived’ capacity, and in doing so, redefined the viability of Pavna’s involvement in the iPad project. Pavna has successfully completed secondary and post secondary schooling and with the help of her family & Ajit, became an entrepreneur.

How has Pavna been able to co-design an iPad app, start a company and be featured on Ted Talks? By demonstrating her capacity, with her eyes. In a relentless pursuit and affirmation of capacity, Pavna was able to communicate with her eyes, by being provided choices and choosing her choices by way of movement of her eyes. Soon, by way of her movements, she was able to demonstrate and communicate more indepth concepts and profound conversations. Soon, Pavna began working with Ajit in this iPad language design by participating via eye movements. Clearly, perceived capacity would have completely removed this opportunity from Pavna, being identified as non-viable. What a drastic change of direction her life would have taken, if those around her had stuck with the world’s definition of viable. 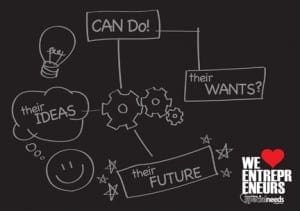 If you view the Ted Talks episode featuring Pavna, you will hear an amazing quote from Daniel Webster, quoted as saying, “If all of my possessions were taken from me, with one exception, I would choose to keep the power of communication – For with it I regain all the rest.” Our loved ones with disabilities never, for a second, stop communicating. Never for a second can we stop searching for the meaning of all forms of communication, for if we do, not only is the viability of entrepreneurship void, we also teeter the very viability of their lives. 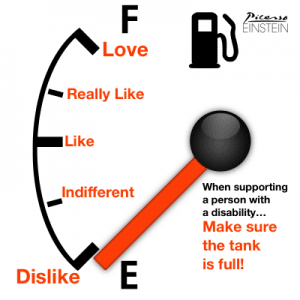 Gas in the Tank Theory:

For persons with disabilities, there are myriads of therapies, activities, skill development programs, and educational models all focused on building this well behaved, well-educated and ‘high-functioning’ (by the way, we dislike that term. Pavna is High Functioning) individual. Some are incredibly successful in doing so. But here is our concern. Without offering options that possess existing intrinsic motivation, driven by LOVE & passion, you now have this beautiful looking Mercedes, with no gas in the tank. What makes any venture, strategy or plan viable is the desire the person has, intrinsically to do it. Focus on existing hobbies, passions, loves, and then design a plan around THAT. You may not have a Mercedes, but you will have, without a doubt forward movement.

Are All Concepts Viable?

That is why as a best practice, when assisting a family pursue and plan a self-employment venture for their loved one with a disability, we require exploration and research of no less than three (3) business concepts. All business concepts should be based and designed as a person-ventured business (focused on the individual’s needs and long-term supports and on the pursuit of sustainable independence).

As we maneuver our way through many communities and organizations, we are often confronted with many stats on traditional employment that are applauded and supported. Granted, not everyone will be an entrepreneur. But really, what makes pursuing traditional employment any more viable than self-employment? We asked that question to ourselves, have continuously asked others and here is what we have found.

We summed up our comparison to a simple ABC measure.

A = Access – how long does it take? How does it happen? What TimeZone is it in?

B = Barriers – internal/external barriers to the employment opportunity?

C=Continuity – What is the turnover? Internal/ external barriers to sustainability?

So, take a look at this chart and you judge viability for yourself 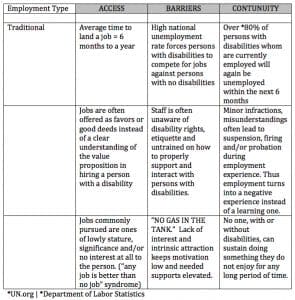 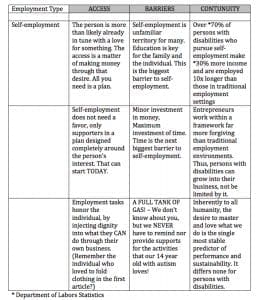 How Do You Determine Viability?

Discover, explore, ask lots of questions, and most importantly don’t assume, ever, that someone can’t do something. They may not be able to do it now, but what lay in the future, no one can say for sure. Here are some good steps to take in exploring the viability of a business concept:

Ask the person with disabilities, if they would like to own their own business.

If the answer is “yes” then explore the following items:

Is a critical element to the sustainability piece of any venture. As difficult as it may be, parents do well to remember that they will one day, not be around.)

If the answer is, “I don’t know” or even “no”, then please do the following:

What we have found, in many cases, persons with disabilities say no, or I don’t know, not because they cannot understand entrepreneurship, but more so because they have not had the opportunity to familiarize themselves with the concept. If it is not spoken about at home, or if the person has not been exposed to entrepreneurship by way of a parent, family member or friend, then how can they themselves understand it to be an option, much less a viable one.

As a matter of fact, in most cases, without bringing disabilities into the context, people whom are not exposed to entrepreneurship during their younger years in life, do not pursue it. In contrast, individuals growing up with family members, friends or peers that are and share experiences of being an entrepreneur, see entrepreneurship as a viable option in life. There is little difference with our loved ones with disabilities. Expose them to entrepreneurship often, consistently, and show them that you yourself believe that it is a viable option for their future of independence, and you will see a shift.

So, in conclusion, how do we define viable? We don’t. The person with disabilities does.

Are you ready to get started?