Rarely does something as simple as a shoelace have the potential to make such a huge impact on every household in America and, possibly, the world. Yet, that is exactly what has happened. RJ is my nine year old son, he is autistic. He loves sports and exercise, but, despite years of trying, he cannot tie his own shoes. About six months ago, I found a product that has changed his life–and mine. It is a simple pair of elastic shoelaces with a very unique locking system that, once installed, stays together forever. And, because of the elasticity in the laces, the shoe easily slips on and off. No more tripping over shoelaces and no more crying at school because other kids are making fun of him for not being able to tie his shoes. This simple, yet highly effective product is called Locklaces (www.locklaces.com). 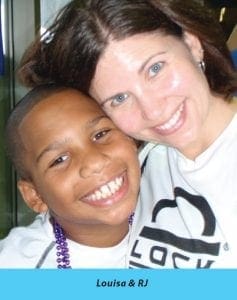 I first learned of Lock Laces while on a visit to Maryland and just happened to meet Eric Jackson, owner of Street Smart, LLC. He shared with me that he had invented a product called Locklaces for runners and tri-athletes in the local Baltimore athletic community. In fact, he was actually wearing a pair himself. I took one look at them and thought “Hmmm, why didn’t I think of that?” He went on to explain that the idea was born out of his own frustration of not being able to keep shoelaces knotted….no matter what he did, they always seemed to come undone. So he went to his mother’s sewing kit, found a piece of elastic and laced up his sneakers only to find that still the elastic came untied. However, he noticed that using the elastic lacing system, the shoe had a better feel and the laces fit well. He just had to figure out a way to keep the laces secured. While he was searching for what to do next, Eric noticed that his windbreaker jacket had a toggle that kept the drawstring for the hood in place. Had he found what he had been looking for? This toggle would do the job. It just needed a slightly different design. He designed a prototype, started wearing his shoelaces and eventually showed them to his friends who suggested he get a patent. So, he did. His product is marketed primarily in the regional Baltimore area. I explained to him that I had a son with Autism and felt that his product could be of great benefit to persons with Special Needs. He said he was definitely interested in helping people with Special Needs. I thanked him for his time and headed back to Pennsylvania. 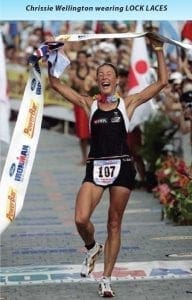 On the entire 100 mile ride home, I could not stop thinking about these Locklaces. I did research online, checked out the website, and much to my surprise, realized that there was not much press on Locklaces. There certainly were no other products that were as easy to use, secure, or recognizable as his product. All I could think about was the scene from the movie Cloudy with a chance of Meatballs where the main animated character is professing “what a wonderful world it would be if someone could invent shoe laces that you didn’t have to tie!” All I could think about was how my own 9 year old Autistic son still could not tie his shoelaces after 4 years of occupational therapy. 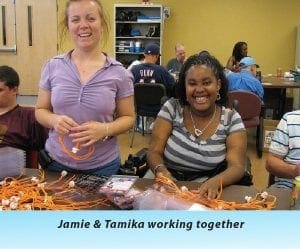 Over the next few weeks at wrestling practice with my son, I noticed all of the untied shoes on his teammates. I showed other parents the Locklaces and they wanted to get them for their own children. They all went to the website to order Locklaces for their kids. After another month, a member of our PTA suggested that we do a Lock Lacer fund raiser. I thought it was a great idea and contacted Eric Jackson to discuss if his company had a Fundraising Program available. He explained that he did not have the staff or resources to implement one. I asked Eric if we might work together to develop a fundraising program. He agreed and invited me to meet him at Opportunity Builders, Inc., in Millersville, Maryland, where Locklaces are assembled. On April 21st, 2010, my life was forever changed when I was given a tour of Opportunity Builders. For 48 years, this non-profit organization has given vocational training and employment services that enhance skills, self-worth and socialization for nearly 400 adults. This experience was like nothing I had ever seen. At least one hundred employees there were devoted to assembling Locklaces. The abilities, organization and attention to detail by the staff of the workforce at OBI were therapeutic productive at the same time. I noticed a woman in her 20’s who was sitting in a motorized wheelchair seated at a computer terminal. 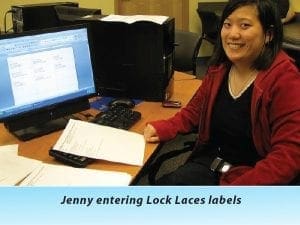 She was diligently entering shipping information and told me how much she liked her job. I was moved to tears. Locklaces relationship with OBI is a lesson in green business planning and sustainable development for us all. At that point, I knew that I had to be a part of this. I thought to myself “what was I doing all these years in a cubicle? I was helping the world from a telephone line.” I needed to be face to face with the people I help. I told Eric that with some creative social work, I could spread the word about Locklaces. I knew I was going to be the voice for Locklaces. I didn’t think Eric, at this point, thought anything would ever come of this enthusiasm. After all, for several years, he had been trying to promote Locklaces with not much success. Initially, he did a few interviews, but most were covering the fact that he was a young black entrepreneur starting his own business. He explained to me that he needed national exposure and distribution from a major retailer. So, I contacted Autism Speaks and got Locklaces on the family resource page, then media newsrooms scheduled TV reporters from NBC and CBS. Remembering a news story about Special Olympics and Official Shoe Tiers, I checked the history of Special Olympics and learned about the Healthy Athletes Program component Fit Feet. I made some calls and the Vice President of Public Relations called me and asked if 3000 Pairs of Lock Laces could be donated to the participants? 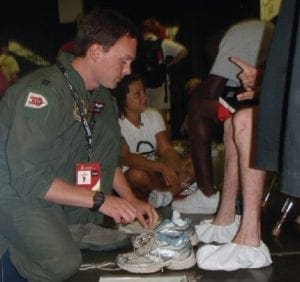 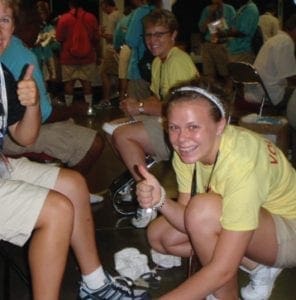 Eric agreed to do it and the amazing individuals at Opportunity Builders, Inc. went to work. Lock Laces helped to increase participation in the Fit Feet Screenings of the Healthy Athletes Program and developing a global partnership with Special Olympics International.

Related: Special Olympics Is Truly Special and Much More Than Just Sports 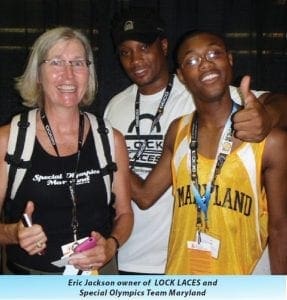 Now, I needed to make good on my word to sell Lock Laces. I made more calls to national retailers. Eric and I were invited to do a presentation to Foot Locker Corporation in New York, where we were well received. In May, I used my vacation time to work on Locklaces. I did research on marketing, media, small business management, supply chain distribution, as well as patent, trademark, and licensing law. It was the best month of my life as a single parent. For the first time in my son’s life, he did not have to go to after school programs or have a baby sitter. I met the bus every day. RJ got interviewed for the local news and the kids at school finally thought he was cool. I knew I was going to have to make this work. On June 1st, 2010, I resigned from my job as a Special Needs Complex Case Manager. For more than 10 years, Locklaces has been trusted and used by hundreds of thousands of runners and athletes worldwide. I am ready to embark on a new endeavor. Together with a passion for helping others, combined with social work skills, we intend to change the world with Locklaces…… making shoe laces obsolete. After all, the last thing you need to worry about is your shoelaces. Yes, rarely does something as simple as a shoelace have the potential to impact every household in America or the world…….but it just might!!