In today’s conversation, I am speaking with Evan Delahanty, the Founder and CEO of Peaceful Fruits, a socially good, snack startup that employs people with disabilities to make healthy, delicious, and rainforest-friendly fruit snacks.

I am excited to speak with Evan because I believe he is also “peacefully paving the way” to form and create economic opportunities for people with disabilities everywhere.

The backstory on Peaceful Fruits

Evan started the company after two years in the Amazon as a Peace Corps volunteer. Initially, he knew he wanted to create a business that was authentic, healthy and delicious and would also stay connected to that economic empowerment mission he was a part of in the Amazon.

It just so happens that AJ is about Evan’s age and has Down syndrome, but AJ’s a champion, envelope stuffer and “sticker-er”. His mom told Evan, “Hey when you get past the ‘Ziploc bag phase’ and you need some helping hands, give us a call.”

Six months later he did just that and a great relationship was built. Soon, AJ was able to do it by himself. After a couple months his mom said, “Hey, Evan, I’m on the board of this great local nonprofit called the Blick Center which does vocational and day therapy and all types of other therapy for folks with developmental disabilities and other mental health issues.”

Peg told Evan that there were 15 other people, just like AJ, that would love a job with Peaceful Fruits. This came at a crucial time for Evan because after he appeared on The Shark Tank, he found himself having to fulfill $75,000 in orders, the biggest his company had seen, yet. The Blick Center quickly cornered off space in their basement for a “Peaceful Fruits Factory”, rolled up their sleeves and got to work to fulfill the orders. It was an incredibly motivating time for both organizations, and that was just the beginning.

Evan calls The Blick Center a “diamond in hiding.” He continued, “In many ways, this partnership has been a Godsend and incredibly helpful that we were able to benefit from their space, their HR, their knowledge, their folks…” Bonnie King, Lead Occupational Therapist with The Blick Center, has been working closely with Evan to identify where Peaceful Fruits can be flexible on the business side and how The Blick Center can be flexible on the non-profit side to pool resources and ideas to create a project that is closely partnered.

Together, Bonnie and Evan developed the structure of the company; designing a process, writing it down, documenting it and managing it to develop procedures that would be clear, understandable instructions for their employees. 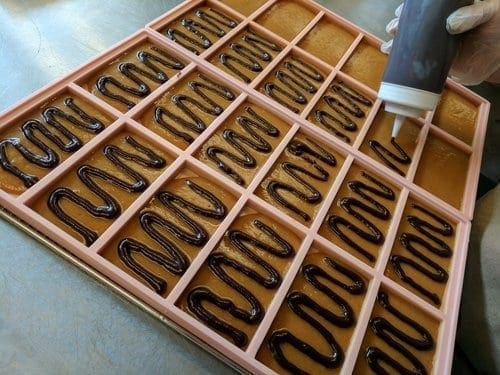 But let’s be honest, it does take more elbow grease. It does take more foresight and planning to lay out those processes and to lay out that partnership to be successful. You can’t throw anybody, especially someone with special needs, into a hectic environment and expect them to start knocking it out of the park from minute one. There’s going to be some training; there’s going to be some ramp up. That’s the reality and it’s okay.

In addition, The Blick Center trains; hires and places these employees in various positions within the company, from cooking and drying the fruit to packaging and shipping and even quality control.

As an employee’s training and desire grows, they have the opportunity to take on bigger tasks until they are in the kitchen with the ownership and able to say, “No, this snack isn’t good enough, I’m rejecting it” or “this one passes”. Evan says they have ownership of the process. 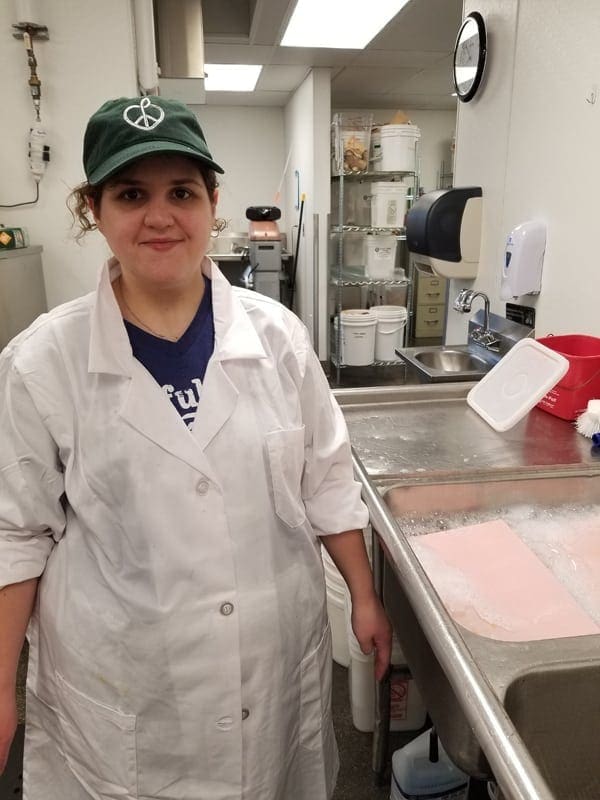 I’m an entrepreneur and come from an operations management background. But, from my side of the table, and working with these incredible therapists at Blick Center, the two things we observed are: One, the people that are successful are the people that can take direction, take criticism with a smile, and do it with a good attitude. Simply getting used to having someone say, “Whoops…that one went wrong, let’s try it again. Here’s what we need to change,” is important to the process because some people respond to that well and some people don’t.

From the business side, we need people that can adapt as much as they’re able. There are some things, within our business model, that we can’t accept. It has to be straight. It has to be done. It has to be correct because it’s a food item. To be able to work in a business setting, you do have to be ready to accept that criticism sometimes. Nobody’s perfect.

The second skill is similar, which is the idea of being ready to raise your hand or shout out whatever and say, “Hey, I think something’s wrong.” To be able to either notice that something doesn’t fit or that you’re confused, if you have a question if you need to pause and say, “Hey, can you just come and help me for a second?” that’s also critical.

Those are the folks that you feel confident to hand a task and you know even if they’re not able to do it perfectly, that’s okay. When they hit a hiccup, they’re going to flag you down. We do work very closely with the folks. We have an occupational therapist in the kitchen at all times, but the people that are able to stand up and say, “Whoops. I need help with this step,” those are the one you can give the most responsibility to, absolutely. 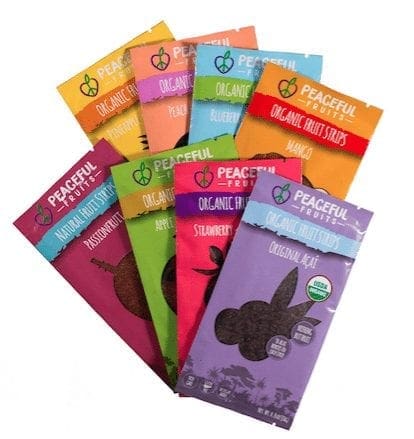 It makes sense as a business

It’s easy to focus on the feel-good aspects of “for profit” companies working with non-profits. It’s incredibly rewarding, useful and motivating. However, Evan says it’s the other side that really surprised him. “These folks, they do a good job and we pay them a full wage and yes we have a unique and flexible team-building environment set up with

Blick that allows employees to work the amount of hours or pace they are capable of. It doesn’t matter if it is 1 or 6 hours a day, but, when they work that hour, their output is good! As a business, I’m happy to pay them a full wage because they do a good job.”

Evan admits that there are definitely faster ways to scale the company than working with people with disabilities. He could, for example, manufacture the product in another country with cheaper, faster labor. However, for Peaceful Fruits, this way made more sense. To Evan, it pays to remember why they are doing it. From both the business side and mission side, Evan feels that some things are worth taking your time to do right.

“We are doing this because it makes sense as a business, and it’s important to not undersell that because we want this to be mainstream. We want people to understand the potential of this underserved population as a resource.”

The reality is that there really aren’t enough opportunities out there for this population and the jobs that are available aren’t always fulfilling. Most employees want to be part of something meaningful and Peaceful Fruits wants to create an environment where these folks can be part of a dynamic team and company that is always growing and changing. An environment in which they, too, can grow within it, learning any and all aspects of the company, and taking on as much responsibility as they desire.

If you have a job that needs to get done, consider calling your local nonprofit center.

Links mentioned in this episode: 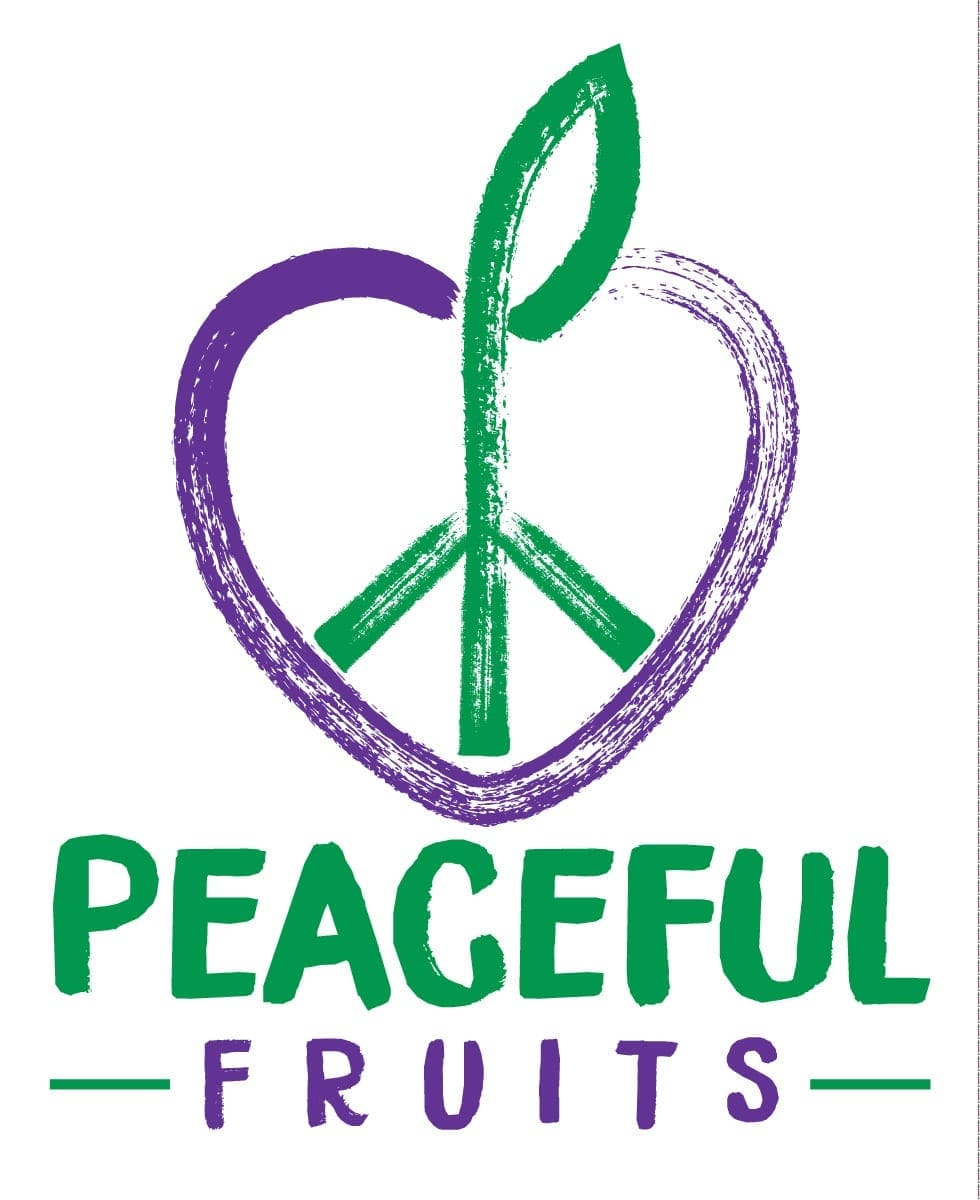 This post contains affiliate links, which means Parenting Special Needs LLC, could receive a commission if you purchase using this link. We appreciate your support.

Shining a Light on Sunflower Bakery Presented by Bus 52