Every time I speak at a conference or my own Autism Fitness seminars, I begin (following a brief introduction and deferring the “I thought you’d be taller…” remarks) with a demystification of what fitness is and why it is so important for the autism population. You see, we live in a culture that simultaneously promotes and glorifies fitness while restricting access to quality physical education and good information on exercise. If you were to close this internet window (not suggested) and type “Fitness” into your web browser, the results would end up in the millions. The quality results, well, that leaves a couple million sites in question. The same situation arises when searching resources and information on autism; plenty of sources and a lot of contaminants.

I frequently remark to friends, colleagues, and random strangers on the train that my professional position is that of a bridge between the autism population, families, therapists, and educators, and the fitness professionals, two great swaths of land that, for all of my knowledge, never had much contact. Not that the two should be exclusive. I’ve made some deep footprints in soapboxes arguing that regular exercise should be a part of every educational and therapeutic curriculum for young individuals on the autism spectrum. The hurdles in my way, and not the hurdles that I enjoy hopping and jumping over, have to deal with the current state of physical education, fitness, and physical culture in the U.S. On to some informational circuit training.

A neurotypically developing toddler can perform a perfect squat. Feet planted firmly on the ground, head aligned with the spine, knees slightly out, and torso at about a 45 degree angle. Five years later, a child has difficulty squatting and rounds the back to pick up an object. This may be an indication of some weaknesses in the major muscle groups, lack of trunk stability, and a few other less-than-desirable physical issues. Is this movement deficit supposed to happen? Or is there another problem?

Movement, including strength, agility, balance, coordination, speed, and endurance, is a set of skills that must be continuously taught and reinforced as a child grows. A comprehensive read through the available research will show a high incidence of movement deficits in young people on the autism spectrum. Movement deficits refer to poor ability to utilize and control muscular systems. It may be evident in gait patterns (walking, navigating stairs), poor posture, or trunk stability. Sedentary lifestyle patterns (lots of sitting with little variety in physical activities and a lack of vigorous physical exercise) can exacerbate the movement issues in both neurotypical and autism populations. 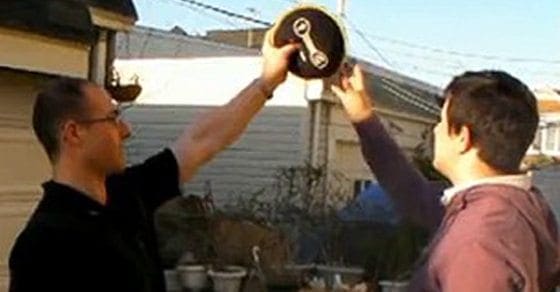 Years ago, when children actually spent time on playgrounds, demonstrating the magical power to fall, have it hurt a little, and get back up, movement skills were honed through random and energetic play. Jumping, hopping, skipping, climbing, pushing, pulling, throwing, and all variations and combinations of these patterns ensured further development of both the muscular and central nervous system. For young individuals with autism, vigorous physical play is often missing from the daily routine. Physical play skills require development through teaching and practice. I often explain that my method is based on “structured teaching to develop skills for randomness.” Children may explore, but there is a point where new abilities need to be initiated through instruction.

Autism Fitness Myth # 2: Fitness and Sports are the same thing.

Fitness is general, and can be applied to many different areas and situations in life, from daily tasks to athletic endeavors. Sports are highly specified and the skill sets within them do not generalize or “cross over” much to other activities. Most of my Autism Fitness athletes do not play a sport, nor do they want to. Have you ever actually watched a little league baseball game? The kids stand in the field, then get up at bat three or four times, sit on the bench, and maybe throw the ball five times (and that’s if they are in the infield). Then the adults tell them how much exercise they got.

Individual sports (martial arts, yoga, fencing) are fine, but realize that these too are highly specific endeavors. Think of sports (individual or team) as branches on a tree. The roots and trunk of the tree are made up of general fitness and physical activity. Sports do not provide general ability even at the highest levels. I was out to dinner with my friend Carlo the other night who was the Strength and Conditioning coach for two MLB teams. If you don’t believe me, he’ll tell you how imbalanced (at least from a physical perspective) most single sport athletes are. Sports are not bad, but they do not provide all the physical needs of a child or adult.

It took me about ten times of trying to ski to decide I didn’t like it. The first couple of times I fell down a lot. Then I got a bit better. Eventually I felt proficient enough in it to do some of the moderately difficult slopes. Then, once I knew I could handle some intermediate runs, I decided I did not care for skiing. I knew the initial few expeditions would be little fun, because I had never skied before. We generally do not enjoy things that we are not good at. Consider how many variations of physical fitness young individuals on the spectrum typically have access to. Maybe sports? (see above), access to a treadmill (I applaud their escape-maintained behavior on this one), A machine-based weight training program (boring with great opportunities for injury and compensatory movement pattern development).

Many young people with autism have an aversion, or gravitate away from vigorous physical activity because A) They resist new activities and task demands that are out of routine B) Motor deficits can make many of these activities difficult especially when taught improperly C) Movement has never been introduced in a way that is fun or meets the needs of the individual D) Exercise program has not been paired with reinforcement including behavior-specific praise or secondary reinforcers (music, access to preferred activities). Any of the above could be factors. My athletes find exercise fun and reinforcing because they are presented with new and dynamic options for regular fitness activity.

Breaking any skill down to smaller increments helps the learner to master each step. Similar to math, science, reading, or any other cognitively-based skill set, movement requires planning and appropriate implementation. I’ve had athletes learn a push-up through breaking the exercise down into eight discrete steps. While mastering each step, the athlete is also growing stronger and more confident. Most often, the environment is not conducive to the athlete succeeding and this is why the athlete “fails.”

In Autism Fitness, we do all sorts of animal movements, swing giant ropes, throw big medicine balls, and slam Sandbells. It is new and exciting for many of my athletes. A few take more time to find it reinforcing. The key is addressing the major movement patterns (pushing, pulling, bending, rotation, and locomotion) and finding a way to teach it while having fun. Often, behavioral and cognitive issues have to be addressed with individual athletes. I’ve started fitness programs for children that include a ten second “exercise” period followed by ten minutes of reinforcing activity. Over time, as tolerance for the new exercise activities increase, we can engage in fitness longer and more regularly. Saying some kids can’t exercise is on par with saying “Some kids just deserve a higher likelihood of cancer and Type II diabetes.”

The play aspect of fitness is something that we are desperately missing, both in youth and adult fitness. There really should not be much difference (other than volume and intensity) between kid and adult fitness. With my athletes on the spectrum, we’re performing the same movement patterns that I would include in my own training/play sessions. Many PE and fitness programs are far too rigid without accomplishing the most critical goals: Getting young individuals to move well and enjoy doing it. Teaching in a structured manner is important for developing the pre-requisite and basic movement skills, but movement exploration and discovery is the ultimate goal.

Expensive machines and video game system “fitness” programs are the antithesis of what actual fitness should be. Standing on a board and watching a video is recreational at best, no matter what the box tells you. It is not true, skill-building fitness and does not do much to promote strength, confidence, self-esteem, or socialization. Machines (treadmills,elipticals), most of my fitness professional friends and I have concluded, are simply expensive coat racks.

The vast majority of equipment I use is inexpensive, can fit in the trunk of a car, and provides much more fitness benefit than any system sold on TV. My short list includes Hyperwear Sandbells, AOS Ropes gone Wild, medicine balls, cones, and small hurdles. You can visit www.autismfitness.com for more info on these.

We’ve gotten a bit wayward with our consideration and approach to fitness in the U.S. Now major media is citing an “obesity epidemic” for the nation’s youth, special needs populations included. The obesity issue is a symptom of a greater problem, namely inactivity and sedentary lifestyles combine with poor nutrition. While the reactive approach means dealing with the possibility of certain types of cancer, Type II diabetes, postural distortions, inhibited cognitive function and lower self-esteem, the proactive approach (regular fitness), opens the gateway towards new abilities, confidence, and long-term health. Which slide would you go down?