Javier eats a couple of bites of his chicken nuggets, pushes his pasta around on his plate, turns up his nose at his vegetables, and leaves the table. An hour later, he is asking for chips and ice cream. Worried about his food intake, his parents eventually give him a snack. This pattern repeats itself almost every meal. The range of foods Javier finds acceptable is continually shrinking, while junk food consumption is increasing. What can his parents do?

Picky eating is a common frustration for parents, but even more prevalent for those with children with special needs. Many children refuse vegetables, fruits, and other healthy options in favor of empty carbohydrates and sweets. As a result, parents worry about the children’s nutrition and feel frustrated at the power struggles that seem always to ensue around mealtimes. Children may “grow out of” these patterns, but there are strategies that can help expand food choices.

First, rule out medical problems (e.g., difficulty chewing or swallowing, gastro-intestinal problems) that could be contributing to the problem. If your child is experiencing these types of problems, get help to address them prior to or in combination with using behavioral approaches.

Second, model healthy eating habits. Stock the pantry with good food and to talk to your child about why you make particular choices. Encourage all family members to eat well-balanced meals, making it easier for picky eater to follow suit.

Third, restrict access to junk foods. If you decide to make sweets and less-healthy snacks available to your picky eater, do so only after he or she has consumed something healthy. It may be helpful to put these items out of sight (e.g., in a high cabinet) between meals. 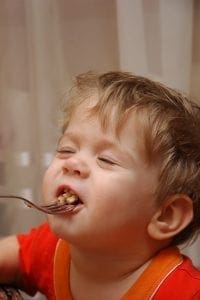 Fourth, establish consistent dining routines. If possible, schedule meals at the same time, expect that food be consumed only at the table, and establish regular patterns for meals. For example, it may be helpful to involve children in setting the table, dishing out the food, and clearing their plates.

Fifth, make mealtimes positive, but not distracting. Engage in conversation with your picky eater when he or she is seated and eating, while limiting your attention (e.g., nagging or cajoling) for uncooperative behavior. Limit activities such as television that could distract your child from eating.

Sixth, start small and build from there. Provide choices among healthier items that your child prefers and limit the portions (only what you can reasonably expect your child to finish) initially. Gradually increase your expectations for types of foods and amounts consumed over time.

And finally, hang in there. Your child may whine, cry, demand, and refuse when presented with healthy options at first. Be prepared to remain firm and your picky eater will eventually learn to accept the limits you are imposing