An Easy Way to Engage with Your Child or Student

I knew Leandro. I met him first at his home and then at Head Start. He is a very smart but quirky kid who loves to draw. As his therapist, it was a way I could engage him.

He’s in kindergarten now—new school, new classmates. He’s doing okay but doing his thing on the perimeter of the group

He’s into robots now and likes to draw a variety of them. That’s why it was sort of easy to get him to “co-create” a book. He said the words. I wrote them down. He illustrated what he said and I stapled the book together. 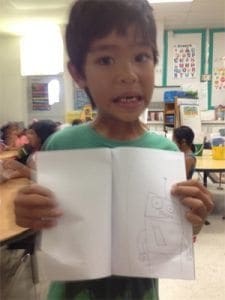 After, I read it to him. We’d read it together and he’d read it alone.  Sometimes he’d lose focus before he read all three pages. We made deals. If he read it all, he could play with one of my toys.

We went back to his class and showed the teacher the book. She asked the children to stop and listen and Leandro read the book, every page, exactly right. The words were easy but there were audible admiring sounds when the teacher showed Leandro’s magnificent drawings.

The other children are going to make their own books now about their lives. Each page will need an illustration. The children can ask others to draw in their book as well as doing some themselves.

And, If they need a drawing of a robot, they know just who to go to!

Learn how Leandro Teaches a Lesson