When the sun is hot, water is the place to be. Kids in water are natural. Water is also a medium that is perfect for experimenting

with basic motor and social skills by putting a new twist on the use of inexpensive swim equipment: the foam noodle and the child-size inner tube.

Riding a noodle is like riding a horse except ten billion times easier. It helps kids work on their sense of balance while having the fun of pretending.

Place a noodle between the child’s legs so that he is sitting in the middle of the noodle and holding on to the top half with both hands. An adult can sit on the same noodle and ride together or have a separate “horse”.

Explain or show your rider how to make the Noodle Horse go by paddling their feet so they move forward in the water. If you pretend to be racing each other, don’t forget the requisite yells of “Giddy up” and “Yippee!” 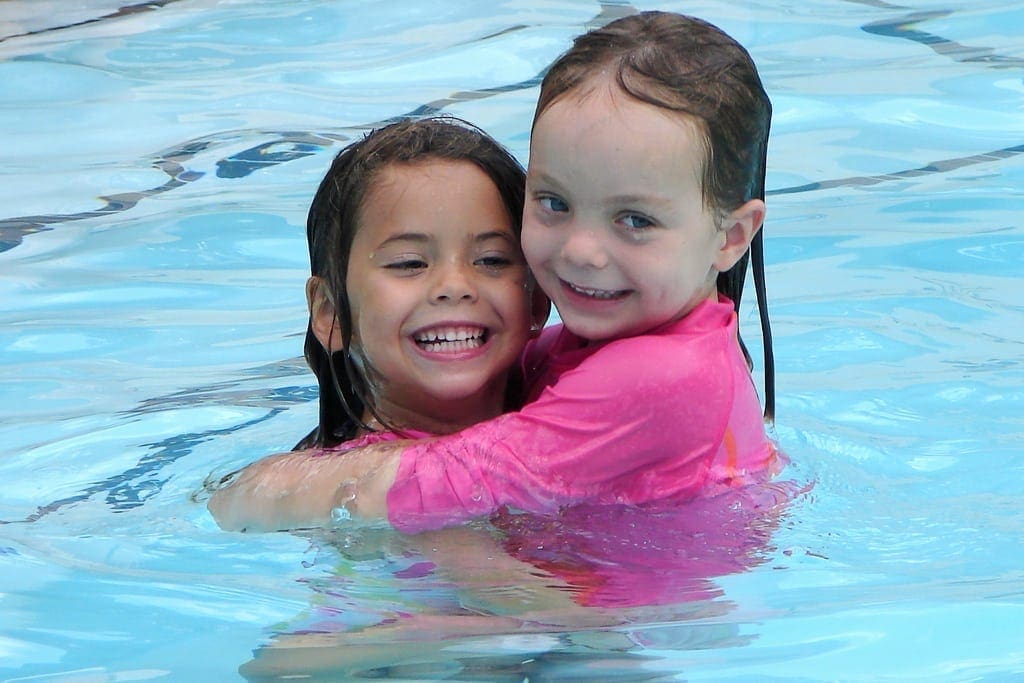 The bridge is made from two noodles. Two people hold the ends of both noodles to form a bridge between them. Start with the noodles arched to form a high bridge.

LONDON BRIDGE IS FALLING DOWN

LONDON BRIDGE IS FALLING DOWN

MY FAIR CHILDREN (INSTEAD OF MY FAIR LADIES)

TAKE THE KEY AND LOCK THEM UP

TAKE THE KEY AND LOCK THEM UP

On the verse that starts with “Take the key”, catch one or more children between the two noodles and move them back and forth until the end of the verse. You can modify the movement to fit the age, temperament and skill level of the child. Move the noodles quickly from side to side if your kids want that excitement or melodically slow for 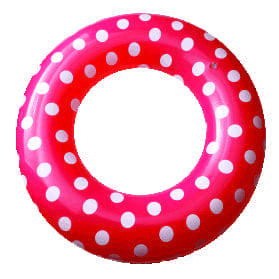 others who prefer the easy ride. You can add the variation of catching more than one child at a time and sometimes catch all the children at the same time!

Later, if you want to add the challenge of kids swimming under water, lower the bridge from its arch to being parallel to the water.

Change the words of the song to: 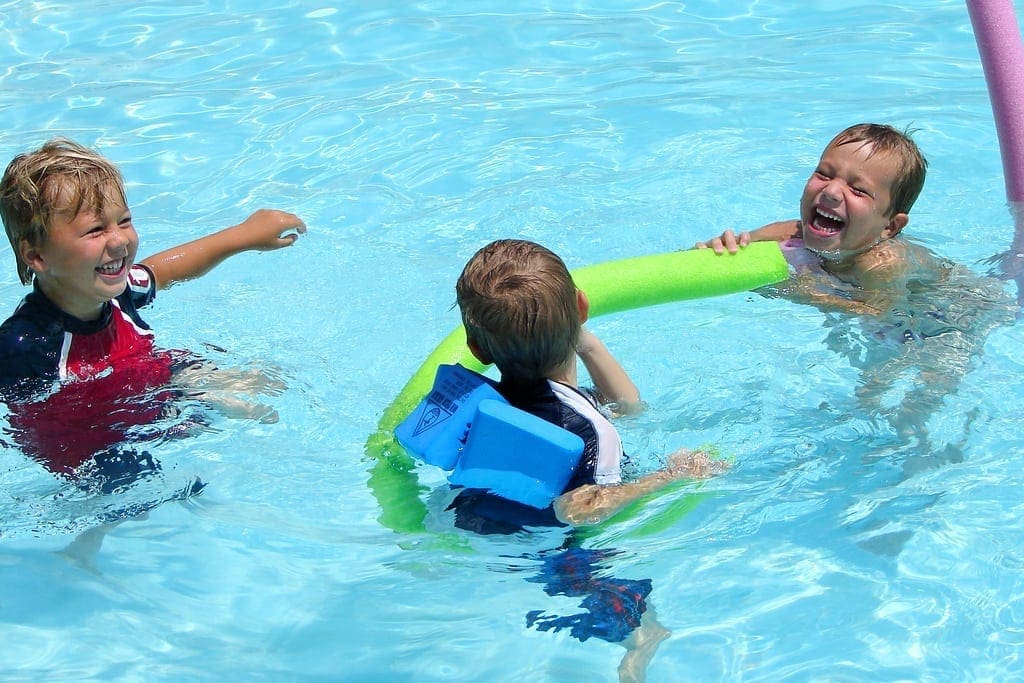 Ball in the Hole 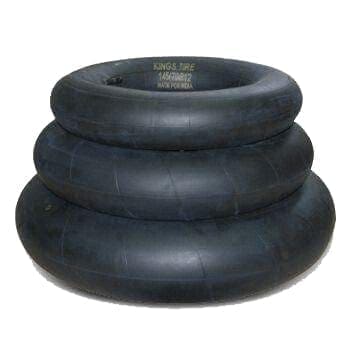 An inner tube floating in the water is the target. The size of the ball they throw depends on the child. A tennis, or, plastic ball works; a beach ball works well especially if it has some water inside it to keep it from floating away. The water adds a bit of a spin to the ball.

If the kids are in a circle around the ball, they can take turns and cheer each other on. If needed, the tube can also be brought closer to increase success.

You can add variation to this game by putting a floating object such as sponge or rubber ducky in the middle of the circle that children have to dunk by hitting it with the ball.

Throwing Through the Tube

Hold the tube vertically and have children throw a ball, or any small water toy, through to the other side. Throwing through a tube helps kids’ eye-hand coordination by giving them a narrower focus on where to throw and thereby making it easier to hit one’s mark. . Children new at throwing will often throw the ball every which way. The hole in the tube gives them a defined direction. Another child, who’s good at catching, can be on the other side of the tube to catch the objects.

Where Did They Go?

Stack three tubes up and have the kids throw balls and/or water toys (the more, the better) into the tube while they sing to the tune of “London Bridge”

Throw the ball into the tubes, where did the balls go?

Then lift up the top tube and say, “are they here”?

Then, lift the second tube and say . “Are they here?” 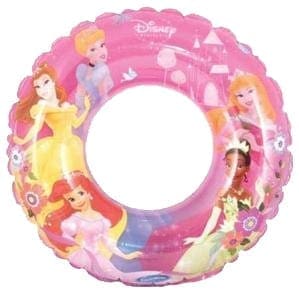 Then, lift the last tube and all the toys and balls are gloriously floating there and you say, “They’re here!”

Now, this game won’t fool anyone. Kids figure it out right away, but if your experience is like mine, they will still want to play it again and again. 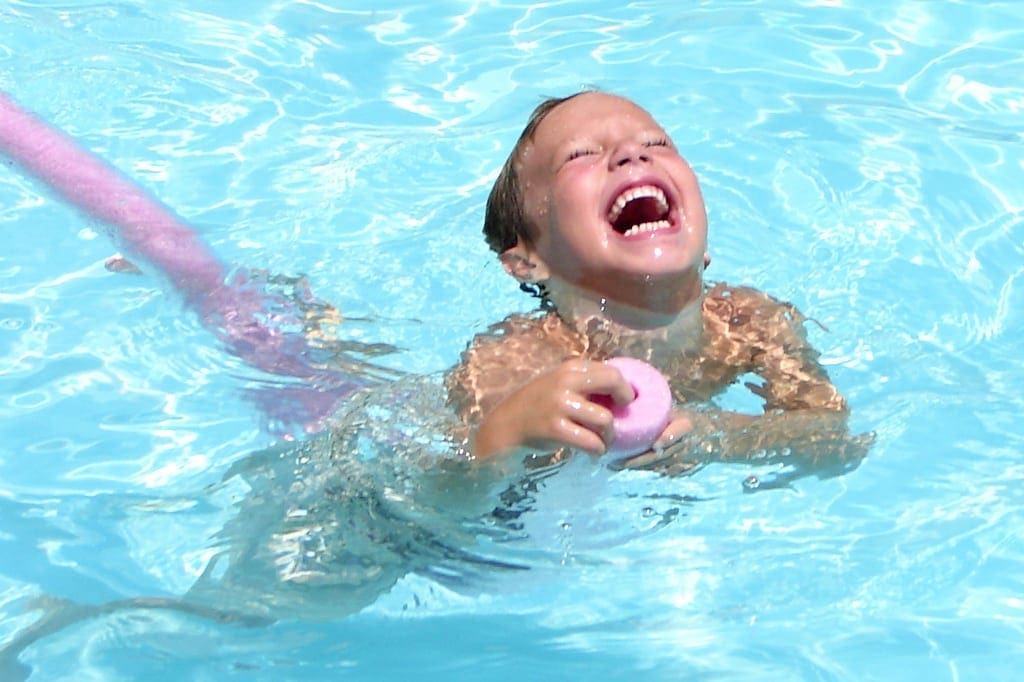 Is Your Family Ready for Fun in the Water this Summer?