The Delicate Balance between Expectation and Acceptance

by Diane Linder, teacher and parent

The Delicate Balance between Expectation and Acceptance

My two roles, that of teacher and that of parent, have become so entwined with each other, that even I cannot tell where one ends and the other begins. This might happen to many educators, but this blending is heightened by the fact that my oldest child has developmental delays. I am involved in his school life more than most parents and on a level that touches me in the most vulnerable of spots. As Benny’s parent, year after year I help his teachers learn how to reach him, and at the same time, I have to hear them, and I have to help push him to heights I never realized he could reach.

Related: Do You Set High Expectations for Your Child with Special Needs?

Benny entered an inclusive classroom in the middle of kindergarten. The first few months brought only progress for Benny, as his behavior improved immediately and dramatically, and he impressed us all by learning to read and write with relative ease. His classmates accepted him from the start and they act as an additional support for him in the general education classroom. By the end of first grade he seemed so much like his peers. At times it was impossible to tell that he had begun school with so many delays. As he progresses, expectations change. As they change we all must re-adjust. Each year brings new teachers and for a child with transition difficulties, this in and of itself is a challenge. Though the challenges change, the sorts of adjustments are similar. We must all find a balance between high expectations and acceptance. Finding this balance takes time and effort. Benny sailed through first grade making “miraculous” progress. Soon into second grade I began to sense some difficulty. I was quiet until a note came home about missing math homework and then I called. The conversation began. The teacher reported to me that Benny did not seem to understand responsibility- and she was right, he did not seem to feel that his homework had to be completed- also true. Inside, I reminded myself that two years ago he could not identify colors, or tell his name or age. Two years ago, a top doctor was adamant that he was retarded and we were pushing him too far. Inside I am bursting with pride that my son can complete even one problem from the second grade mathematics text. I am in awe of his new found ability to add pairs of 2-digit numbers, and in my heart I do not care if he completes the sheet. Does this teacher know from where we have come? Yes she read the IEP, but it is a new IEP, an IEP reflecting his achievements in first grade, an IEP predicting success in second, and on the phone I hear a teacher who expects him to work like his peers. It is a role I never imagined myself to play. I do not know yet how to respond, but I know we must keep the conversation going. And so I am honest. I tell her a bit about his past, and I tell her how grateful I am that he is in a place where expectations are high. I promise to help, I admit that I have not pushed, that I kiss him for trying and let him slink off after one row of problems, grateful beyond words that he understands the ideas. She tells me more- he is remote, does not respond to her, lost in another world. I try to tell her that may be but that he still is listening, taking things in the way he can for now. For the next two months we take him on and off the low dose medication he takes for ADHD, and the keep him on a half dose. He becomes more alive in class. He still answers “I do not know” to most everything and did the bare minimum, sometimes even less. She calls me often to tell me what she observes, to ask me also what she can do, and I cannot say.  Conversations are often long as we circle in and around the issue but cannot yet get to the heart of the matter. Some of the problem I can easily articulate; expectations began too high for him and fell too low. She tells me she began to ask him easier questions in order to give him a chance to succeed. She mentions in passing that she knows he will not follow the Martin Luther King talk and she might send him out for extra reading help instead. Inside I feel angry that she has decided ahead of time to exclude him from a topic of such importance, but I am quiet. She will not say he reads, but prefers to call it “decoding.” She has not yet seen any evidence that he can comprehend. As a teacher I understand her position. As a parent I know how easy it is to underestimate his abilities.

She is a teacher with many years of experience and a teacher who wants to connect and so we keep talking. Our fall parent-teacher conference lasts 1 ½ hours, as we pour over her notes, her observations, try to come up with a plan, a way to bring him into communication with her. She alternately questions herself and then him and then “does he belong?” flits across her face- and I sense it though she does not use these words. I know now that we are getting somewhere. In other areas of my life, I would run from this kind of situation, but for my son I go ahead full force into the fire. Only by dealing, discussing, and explaining can we move past this doubt that threatens to engulf him. He must be accepted, there must be no doubt that he belongs, that he is part of the class, that he benefits from being there, and  that he can rise to the level, whether or not he ever does. And how do I as a parent communicate this without sounding accusative, unrealistic, naïve? I do not know for sure, but I raise the issue and together we confront it. Her questions stem from her own fear that she has failed to reach him. I try to tell her that he has come so far already in her class, in ways she may not see, but we do. 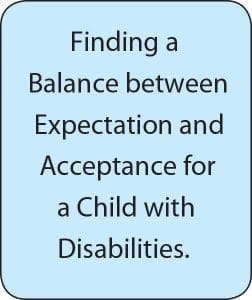 Her eyes brighten when I describe how his confidence as a reader has grown. Her body relaxes as I report his fascination with my calculator, finding pairs that add to 1000, even though in class he does not show much number sense. She hears my words and they remind her to tell me about a potholder he wove a few days before in class. She had all but given up on him, she said, only to walk back to him twenty minutes later and find his hands working quickly on his creation. The red haired girl beside him said she “showed him how.” And his teacher is embarrassed that she herself could not, and wonders aloud how a boy who cannot tie his shoes could weave a potholder with such a golden glow. And I suggest to her that this is the power of inclusion, that her job is not to be his only teacher but to welcome him into her class, so that he can learn from his peers, and he will. And she nods, and she begins to understand. I realize that reaching Benny can be a challenge, and I speak with the other members of his team. I ask his Occupational Therapist to practice math facts with him as he does his sensory jumping on the trampoline. By a week’s time, Benny can skip count to 200 by all sorts of numbers, and his OT goes to find his teacher. Benny counts for his teacher, first in the air, but then he does it on the ground. Next he writes it on the board and in two more days it is on his paper, in his notebook, straight and neat, written like a top notch second grader. Now it is clear sailing. He has broken through. She knows what is inside, and he will not close up. He writes essays and passes spelling tests, and he is able to compare the books they read. He participates in the Martin Luther King discussion and writes an essay about segregation that touched on feelings most second graders could not describe. Benny knows what it means to be excluded and he knows what it feels like to be accepted. His teacher is “ecstatic.” She has a relationship with him now.

Related: What to Expect when Establishing Expectations

By the end of the year his accomplishments will be so great that the third grade teacher will expect him to begin the year that way. Each year brings new expectations. Each year brings a new ride, complete with twists and turns. While many students progress along a line, a straight line with a known slope, children with special needs do not. They ride a wavy curve, and the parents and the teachers have to learn to accept this. It will be a bumpy ride- the ups and downs, determined in part by his spectacular progress. We can all handle the ride so long as we are able to learn from each other. It might help to know that by springtime, we will be in a glorious place once again.