What makes an Everyday Hero? United We Sing!

We were first introduced to Corey Lee Barker over the phone when a friend of a friend sent us a CD demo to listen to. Once hearing the Everyday Hero song written by Corey Lee Barker, we knew it was perfect for our “Everyday Heroes” section of the magazine. We reached out to Corey and asked if we could use his song on our site as the theme song for our “Everyday Heroes”. Corey was very gracious and immediately agreed to let us use it. Keep in mind that this was over 4 years ago when we only had one Everyday Hero on our site. 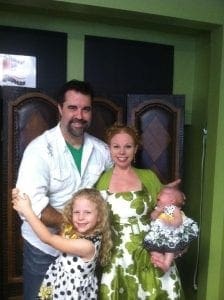 During the past 8 years, he has built up studio credits, enlisted the help of engineers and musicians to volunteer their time and talent, has written the material and produced “United We Sing”.  This remarkable CD of 12 songs features the singing of 12 young children. The message in each song is positive, uplifting, and something that can be shared by all. Included in the CD is the song “Everyday Hero”. The CD has won the “crowd favorite” award in a national United Way campaign held this year. In addition, Corey has decided that this CD, in addition to any future projects, would serve several goals. They would be positive in message; they would help to support a special needs cause; and they would help spread the word about the special needs community. Corey has decided that he wants to partner with Parenting Special Needs Magazine in order to assist us in getting the word out. Frankly, we could not be more honored to be a part of this project.

As a writer, Corey Lee is able write in all styles of music: country, Christian, children’s, television, film soundtrack, contemporary, etc… He has formed Coreyoke Records and is also involved with BS Works and Stockbridge Records in Nashville, TN. His passion for music is evident and much of his music is able to be listened to on youtube. A simple search for his name will reveal a great variety of his abilities and talent. It is said that: a man’s worth is valued not by wealth, but the love given to those he cherishes and received from the same. In the case of Corey Lee Barker, his worth is remarkable indeed.! To listen or purchase a United We Sing CD, please visit https://soundcloud.com/coreyleebarker

A portion of every CD sold goes back to help support Parenting Special Needs Magazine. Thank you in advance for your support.