A bunny with temper tantrums?  An irritable, over-active rabbit who could not concentrate long enough to sort Easter baskets?

“That’s what the Easter Bunny would be like if he ate the brightly colored candies he brings children every spring,” said Jane Hersey, National Director of the Feingold Association (www.feingold.org), a charity that helps children with learning and behavior problems.

“Most parents would be shocked to learn that these candies’ vibrant colors come from petroleum-based dyes linked with hyperactivity, inattention, and other problems” said Hersey, whose own daughter’s behavior was helped by eliminating these additives.

In fact, many synthetic food colorings are produced in Chinese petrochemical refineries, according to Hersey.

“European families have an advantage over American ones in choosing healthier candy, because most synthetically colored foods sold in the European Union must now carry a label warning that these dyes ‘may have an adverse effect on activity and attention in children,’” she said.

While a recent Food and Drug Administration panel narrowly rejected requiring similar warning labels on dyed foods sold in the United States, it concluded that these dyes can exacerbate the symptoms of attention deficit hyperactivity disorder (ADHD) and other behavior problems in susceptible children.

These actions were prompted by mounting scientific evidence, including a meta-analysis of fifteen studies, in which researchers from Columbia University and Harvard Medical School concluded that synthetic food dyes are linked with hyperactivity.

A highly regarded study in a British medical journal, The Lancet, also found that synthetic food dyes can trigger hyperactivity, inattention, and impulsivity in all children, not just those with ADHD.  This study credited Dr. Ben Feingold, who developed the low-additive Feingold Diet, with discovering the link between these additives and hyperactivity.

A recent study from the University of Arizona went further and suggested that the increased consumption of synthetic food colorings in the modern diet may be partly responsible for the dramatic rise in ADHD. This study recommended that all families of children with ADHD eliminate these dyes from their children’s diet as much as possible.

Another major concern with synthetic food dyes is cancer.  According to Hersey, Red #3 has been shown to cause cancer and three other dyes (Red #40, Yellow #5, and Yellow #6) are contaminated with low levels of known cancer-causing compounds, such as benzidine. 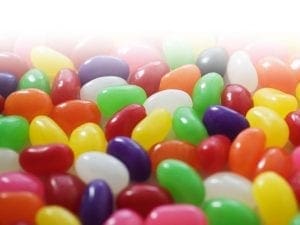 Be sure to feed your children a nourishing meal before they dig into their Easter treats, and consider planning an Easter egg hunt, so that they can get some exercise while having fun with the family.

“If you follow these suggestions, your kids will have a healthier Easter, and you will never have to fear the Easter Bunny again!” said Hersey.

Jane Hersey is National Director of the Feingold Association and author of Why Can’t My Child Behave?  A former teacher and Head Start consultant, she has testified before the National Institutes of Health, the U.S. Department of Agriculture, and Congress about ADHD and diet.  She frequently lectures at education associations, hospitals, medical groups, universities, and schools.