Beresford West, 22, a non-verbal individual, needs constant assistance and medical attention. Beresford, in the care of another New York-based agency, spent many years in critical condition. Near death, came to the Bloomberg residence severely underweight and required a feeding tube. Within months, many of his medical and emotional issues were eliminated. Proper treatment and attention has helped Beresford gain over 30 pounds. He’s now able to socialize with friends and express himself. Overall, Beresford is just a happier person. 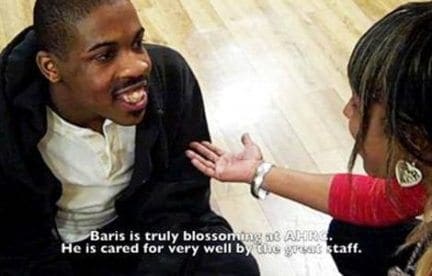 (Pictured: Beresford West, a resident at AHRC’s Bloomberg Apartments, had his life turned around by proper medical and emotional care.)

The Bloomberg residence in Jamaica, Queens, is home to 24 elderly individuals and medically fragile young adults who are in need of full-time nursing oversight. There are four apartments with four very different groups of people. Each six person apartment is comprised of single or double bedrooms with a living room and a dining area. The staff includes nurse practitioners and supervising registered nurses who are on-site 24/7. Residents also have access to speech and physical and occupational therapies as needed. Currently, the people who live there range from age 14 to 91 and include a married couple who were not able to live together while in the nursing home. The Dickson Goodman Apartments, located in Harlem, also have four apartments with similar arrangements.

With people living longer, the demand for care of aging and medically frail people with intellectual disabilities is dramatically increasing. Often, a dilemma ensues for parents and caretakers when dealing with their aging or medically frail disabled child. Entering a nursing home or hospital like setting can be lonely and depressing for anyone, regardless of disability.

AHRC New York City, a leading non-profit organization serving individuals with autism and other developmental disabilities, considered the options…and then dreamed of a better way. Rather than restraining this population’s independence in an undesirable setting, AHRC constructed two of the first residences that offer apartment-like environments, while also catering to their 24-7 medical needs.

“Many of the people who live in the apartments were taken out of nursing homes and hospital settings where their lives were very different then they are now. This is not hospice it is not where people go to wait for the end of their lives it is where they go to live as independently as they can with 24-hour nursing care,” said AHRC Director of Residential Services, John Flaherty.

Community involvement and activity is crucial to the well-being of people. Individuals are integrated out in their neighborhoods daily. They are able to sit around their table and eat a homemade meal. Two of the residents, who are married, are now able to live in the same apartment. Though minute details to some, imagine life without these things?

AHRC New York City, a family governed organization, is dedicated to enhancing the lives of individuals with intellectual and developmental disabilities, including autism, as well as their families. AHRC currently serves over 13,000 individuals with developmental disabilities throughout the ﬁve boroughs. The array of residential, day habilitation, educational, respite, and medical services offered by the organization is unsurpassed. For additional information about AHRC, please visit www.ahrcnyc.org.