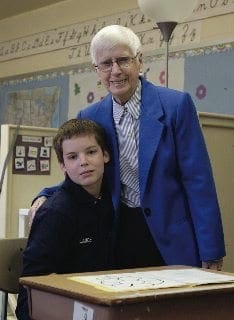 Spitfire and an Inspiration –

A Benedictine School parent recently said about Sister Jeannette
Murray: “Mother Theresa said ‘that to do good work you need serenity
and joy’. You are one of the most reassuring and forthright people I’ve
ever known, and those attributes give peace, hopefulness and
happiness to those who know you.” Not only do Sister Jeannette’s
students look at her as a hero, but also, so do the parents of her students
who say that she and the Benedictine School have saved many families and marriages.

It might seem odd to describe a nun as both a spitfire and a savior,
but, upon meeting 84-year old Sister Jeannette, Executive Director of
the Benedictine School, you instantly admire her fiery passion and
determination. Her relentless spirit and dedication has allowed the
school, celebrating its 50th anniversary, to become a nationally
recognized educational living and learning environment for children
and adults with special needs.

What drives Sister Jeannette most is the love she has for her students
and her devotion to improving the lives of individuals with special
needs. Sister Jeannette has been described by parents of her students as
“a little woman with a huge heart”.  She wants the best for her
students and her “won’t take no for an answer” attitude has helped the
school become a state-of-the art educational environment and also a
spiritual place that brings inspiration and hope to students and
families.  She says her Irish background has contributed to her
tenacity and stubborn nature.

After taking her vows in the Order of St. Benedict, and earning a B.A.
in education from Seton Hall University, Sister Jeannette taught in
parochial schools for seven years.  In 1959, she co-founded the
Benedictine School.  Today, Sister Jeanette is the executive director
of the Benedictine School and has to wear many hats.   She is a director for
a staff of nearly 200, a fundraiser, a construction consultant, interior decorator for the Open Community Program homes, a dorm mother
for 20 teenage boys, and most importantly “like a mother” to the 100
students that reside at the Benedictine School.  Teachers at the
school say it isn’t unusual to hear Sister Jeannette reminding
students in the living quarters to brush their teeth and comb their
hair early in the morning before the school day begins.

Sister Jeannette’s most recent accomplishments include
leading a successful $10 million campaign (“It’s All About the Kids: The
Campaign for the Benedictine”), which also raised $3 million for capital
improvements and $7 million for endowment funds ($2.5 million for tuition
assistance, $2.5 million for faculty and staff excellence and $2 million for
program excellence). She also led the charge for therapeutic aquatic center for
the school (her fundraising efforts not only built the pool but an additional
five offices for the school). Her vision for the next five years includes the
building of a senior care center giving her aging students a place to
transition to after the Open Community Program.