The Scoop on Poop A Plan for Independence

The Scoop on Poop A Plan for Independence 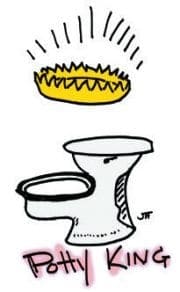 This too shall pass,” can be a term of annoyance. I am talking about poop. Yes, you can call it many other things: dung, feces, excrement, or even crap. However, at the end of the day, it is less about a bowel movement and more about achieving independence.

For many parents of children with special needs, this is an obstacle that consumes us. There are so many layers of emotion: the guilt, the judgment, the lack of understanding and the presumption that our child is not smart because they struggle with being able to perform a function that most children and adults take for granted.

As I have often stated, I am not a health or educational expert. I am just a parent who has tales from the front lines. I remain in the trenches each and every day. I, like you, obsess about basic skills. What are simple functions for others are MONUMENTAL achievements for our children. I only wish to tell it with truth, love and a bit of humor.

My goal is to encourage and to let you know that if I could live to tell about it….so can you!

My, “path of poop”, as I like to call it, was nearly an eight year journey. I suppose at some point my son may hate me for sharing our saga. He may even bribe me – I suppose forgiveness can be bought. However, it’s a risk that I am willing to take. You see, to achieve something others take for granted, you often have to make unreasonable choices to succeed – to master the daily functions of independence.

I wave my banner of toilet paper with pride. I have rolled through many strategies and dumped several behavior plans until we finally figured it out.

You see our son, like many children, had the “pee part“down first. I must qualify that statement by saying that it too was a delayed process. It took us until he was almost five years old. I had obsessed that I had controlled every aspect of his life in an effort to advocate and push for his achievement. Urination was a station he could control. So, when he could finally conduct and direct this basic bodily function, I thought we were home free.

I was so wrong. The next two years would be consumed with getting him to do it the old fashion way – in the potty and not in his pants.

Our son would try to hold it all day long at school. He preferred doing it at home. This restraining process resulted in accidents and other mishaps. We could go for weeks without any issues and then would have a flood of incidents. It was very frustrating for him and for us.

Like a crazed scientist, I researched many options online and reached out to other parents for their suggestions. Below is a list of all of the things we tried.

A second list details what finally worked. Since every child is different, I believe that success can be achieved in many different ways or combinations.

So here is what I have lived and what I have to give in terms of tips of achieving independence and living “poop free:”

What We Tried (but were not successful):

Here is what eventually worked for us: