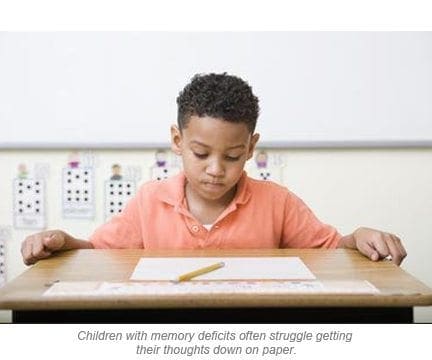 Some children with learning disabilities have difficulty organizing their thoughts and verbally expressing them. Others struggle getting their thoughts down on paper. All the while, some children have difficulty remembering information. An effective memory is critical to a child’s academic and social development and success. Research published in the Journal of Experimental Child Psychology has demonstrated a relationship between children with memory disabilities and weaknesses in academic areas. Memory is divided into two levels: short-term memory and long-term memory. Short-term memory represents a limited capacity and duration for retaining information. The information is available while it is being attended to, but may be lost if not constantly repeated or associated with something already familiar to the individual. Long-term memory represents stored information of a longer duration. Short-term memory deficits in children are more common than long-term memory deficits and may be a sign of a learning disability.