Our Proud Moment this issue is from Sammy Callari. Sammy is a personal trainer in Naples, Fl., who has been working with a young man named Parker Seward.

Sammy explains it this way:

People tend to ask me, “What do you think it is about your relationship, or what is it that has touched your heart so much”? The answer is simple: It’s Parker. I don’t think it has much to do with me, at all. As much as people want to say, “Wow you’re a great personal trainer, you’re so good with kids”, while I do appreciate that, it’s actually what Parker has done for me. I think to myself, “Here’s a young boy who was born with a disability; so, since day one I think he’s had “society” basically going to count him out. He has disability and there’s a lot of people that would do things better than he could. But, I look at that and I’m saying to myself, “Why can’t Parker do that? What can’t Parker do?” As long as you give him enough time and enough patience, and teach him the right way to do things….he CAN do it. He is willing to do the “daily grind” that I see in the gym. We work with each other twice a week plus we hang out outside of the gym, so I see him a good amount of time.

But it’s just his energy, his personality. It’s his work ethic, it’s that he’s trying. In my opinion, he’s an underdog and I used to compete in mixed martial arts, and in four of my five fights, I was the underdog. They’d write up the little story before the fights and they’re counting me out. To be able to prevail, to know that you put the work in, and you prove the naysayers and the haters wrong, well, I feel for Parker. It’s an unbelievably rewarding experience to see this young man able to learn these things. He is proud of his accomplishments: If you see him and you say, “Hey Parker, let me see your biceps,” he gives you this big squeeze and says, “Feel this, feel how tough I am.”…it’s very inspirational. I am on a mission as a personal trainer to inspire billions of people, and I say it with a “B” because that’s a huge goal of mine. Because Parker has had such an impact on my life I am trying to take that inspiration and those feelings and feed it to other people. Yes, it started out as a personal trainer working with a young boy, but, there is a mutual benefit that we both get. It’s fun AND we love to have a ton of fun with each other. He works super hard and he’s taught me so many things that it would probably take me a good couple hours to write them all down. In the biz you would call it a Win-Win situation. 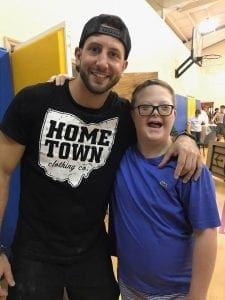