Feeding the Hungry Brain With Music

Feeding the Hungry Brain With Music

Music is an amazing communication tool. No matter what language you speak or whether you can communicate verbally at all, music is a fundamental way through which to reach out and to be reached out to. That is pretty powerful. And for me personally, it’s proved to be a primary connection resource. 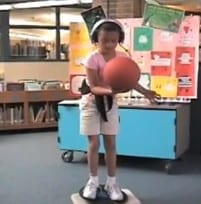 Music was how I was able to connect with my mother, even when she was in the throws of a manic episode. It was a way to reach the part of her that was calm. I turned to music when times were too tough to face and it pulled me through to a more positive perspective. And now, with my daughter Jaimie, I used it as a way to calm her, to organize her or to reach her when her world is too overwhelming for her. And now it’s become a central part of her therapy.

We’ve tried many methods over the years to teach Jaimie how to cope with Sensory Processing Disorder (SPD) but one of the things that seems to have had the most success is music in conjunction with movement. Jaimie has experienced three sorts of therapy using music, each having its own specific goals and focus:

(a) Music Therapy: These sessions are conducted by a Certified Music Therapist whose focus ranges from helping children through emotional, behavioral or mental issues to dealing with sensory sensitivities. A variety of music is used with a mix of instruments, movement/dance and/or singing depending on the needs of the child. Music Therapy helps introduce tones, rhythm as well as an interactive way for sensitive children to experience sound in their own way and comfort level.

(b) Listening Therapy: Similar to Music Therapy except that the child is listening to a carefully planned program on headphones while doing calming activities. As the title indicates, the child is listening to the music which often ranges in terms of pitch and tempo. The goal of Listening Therapy is to teach the child to recognize, interpret and process different types of sounds in a way they can control the volume. Children who have auditory discrimination often hear sounds but aren’t able to understand what they’re hearing so they are unable to process the sounds properly. Reducing the other distractions around them and giving them the control of how loud the input is can make experiencing sounds feel less scary. Listening Therapy is a great way for the child to pay attention to different music (pitches) and eventually be able to tolerate them.

(c) Integrated Listening Systems (iLs). This is a powerful system which combines the best of Dr. Alfred Tomatis’ auditory techniques with movement. Interestingly, Tomatis’ auditory devices were created to help musicians and singers with speaking and/or vocal issues. But when he began using these same devices on children, he noted a significant difference in terms of memory, attention span, ability to focus as well as posture, coordination and balance. He knew that by targeting specific areas of the brain using “filtered” music, it was possible to retrain and improve sensory, motor and learning processing. Most specifically, he realized music helped the functioning of the brain stem and cortex. We don’t realize it but we use the visual, auditory and vestibular systems together in order to successfully interact with and understand the world around us. And by combining movement with a music program designed for those with autism and/or SPD, iLs has discovered how to help integrate sensory information much more effectively.

The idea behind iLs is similar to that of Listening therapy except that the headphones for iLs are specially equipped with a tiny piece called a ‘bone conductor.’ The purpose of this bone conductor was explained to me that, for example, the way we hear our own voice is very different than how others hear it or how it sounds on a tape recorder. (How many of us absolutely detest the sound of our own recorded voice?) Essentially, the bone conductor gives us a ‘3-D’ effect of sounds and experiencing those sounds in a more pure form. Not only that, but the person participates in activities while listening to the iLs program as a way to get their visual, auditory and vestibular systems working in sync. For people, especially children, whose sensory systems have never been integrated, or working together, the world can be a terrifying place. Another significant difference between iLs and other ”listening programs” is that iLs has developed a Sensory Motor Program specifically for SPD and autism. It is based on years of feedback from therapists working with this population of kids, and uses frequencies in a way that is completely different from Tomatis’ programs.

Jaimie used to be a child who covered her ears and screamed with the slightest noise. She startled easily, she shrieked whenever a siren went off, she freaked out when voices were too quiet or shrill or gravelly. It never dawned on me back then that the reason for her severe reactions wasn’t because she necessarily feared the sound but more because she didn’t understand them. Her brain simply didn’t recognize it, couldn’t process it so, therefore, never made that neural connection that “Oh. Okay. That is my Mama’s voice. That’s fine.” or “I hear the ambulance and it’s really loud.” To her, both noises registered the same and triggered the same level of confusion resulting in fear. That’s where the different music therapies helped us.

Music therapy introduced Jaimie to various musical tones and sounds. She banged on drums when she needed LOUD and tapped on sticks or mini-xylophones when she needed more quiet tones. It also helped prepare her for the more direct interaction with Listening Therapy. She was able to tolerate the headphones and realized that she could turn up the volume of the music LOUD when she needed it or when there was music she liked and turned it back down when noises weren’t as fun for her. It also forced her to actively listen to sounds and music and not avoid or run away from it. It prepared her for the next step, which was the iLs.

ILs has been a true blessing for us. Until she was fully assessed recently we didn’t truly understand how much Jaimie struggled with areas such as motor-planning, vestibular coordination and how much she needed visual stimulation and visual cues. She now does OT with the iLs system and we are saving to purchase a system for at-home use. Watching her move her body in ways I never thought would and to tolerate people, sound and activities she never could brings me such joy.

Not every child will need to go the step-by-step approach that Jaimie had to. Her sensitivities are on the severe side and so we’ve always had to approach each therapy with baby steps. Jaimie still has a way to go but music has given us a gift of hope.

The most important thing I’ve witnessed music do is help a little girl who feared her world so much, she literally sat on our couch, curled up in a ball with her hands over her ears most of the time. Music fed her hungry brain and now I can finally see glimpses of the little girl Jaimie keeps hidden away.

And for that I am so grateful.

For more information, please refer to the following resources:

www.creativedance.org – BrainDance Website (A GREAT way to use music and movement together in a less therapeutic way.)