Last week, I was sitting in front of a computer with Mansur, a 16-year-old boy with autism who I’ve interacted with most days since I began working at IRODA – an autism advocacy NGO located in Dushanbe, Tajikistan. Mansur is quite good at typing, and my job is to sit next to him and help him read letters out of a book, which he then types out on the keyboard.

As I sat there, one of the moms who works at the center stood up from where she had been watching me and tapped my shoulder. She motioned to the sloppy braid I’d put my hair into, and then pointed to herself, asking if she could do my hair. Earlier that day she had taken out her phone and showed me pictures. I looked through photos of her, her kids, henna designs that she’d drawn, and braids that she’d made. I told her that all the pictures were beautiful, and that she was very skilled with henna and braids. By the end of the afternoon, I was sporting one of those elaborate braids. A couple of times that afternoon, when strands of hair fell out of place, she tucked them back in, patted my head, and smiled.

These sweet interactions with the mothers who work at IRODA happen daily, and have become a central aspect of my experience this summer with America’s Unofficial Ambassadors (AUA)

I am volunteering at IRODA as part of AUA’s Summer Service Internship program. Our goal is to engage in citizen diplomacy, dispel negative stereotypes, and build strong relationships between Tajiki and American people. At IRODA, the women, in particular, have welcomed Aubrey (my fellow unofficial ambassador) and I with kindness.

Even though we don’t speak the same language, we have found ways to communicate. During our second day at IRODA, Aubrey and I pulled out our laptops to work, and the mothers said “Oh! You will show us pictures now!” And gathered around. We spent the next half hour showing them photos of our families and friends back home. They were delighted to see the faces of the important people in our lives, and we were excited to share some of our stories with them. Since then, we’ve sung popular American songs with them, learned Tajik dance moves, and taught each other words. 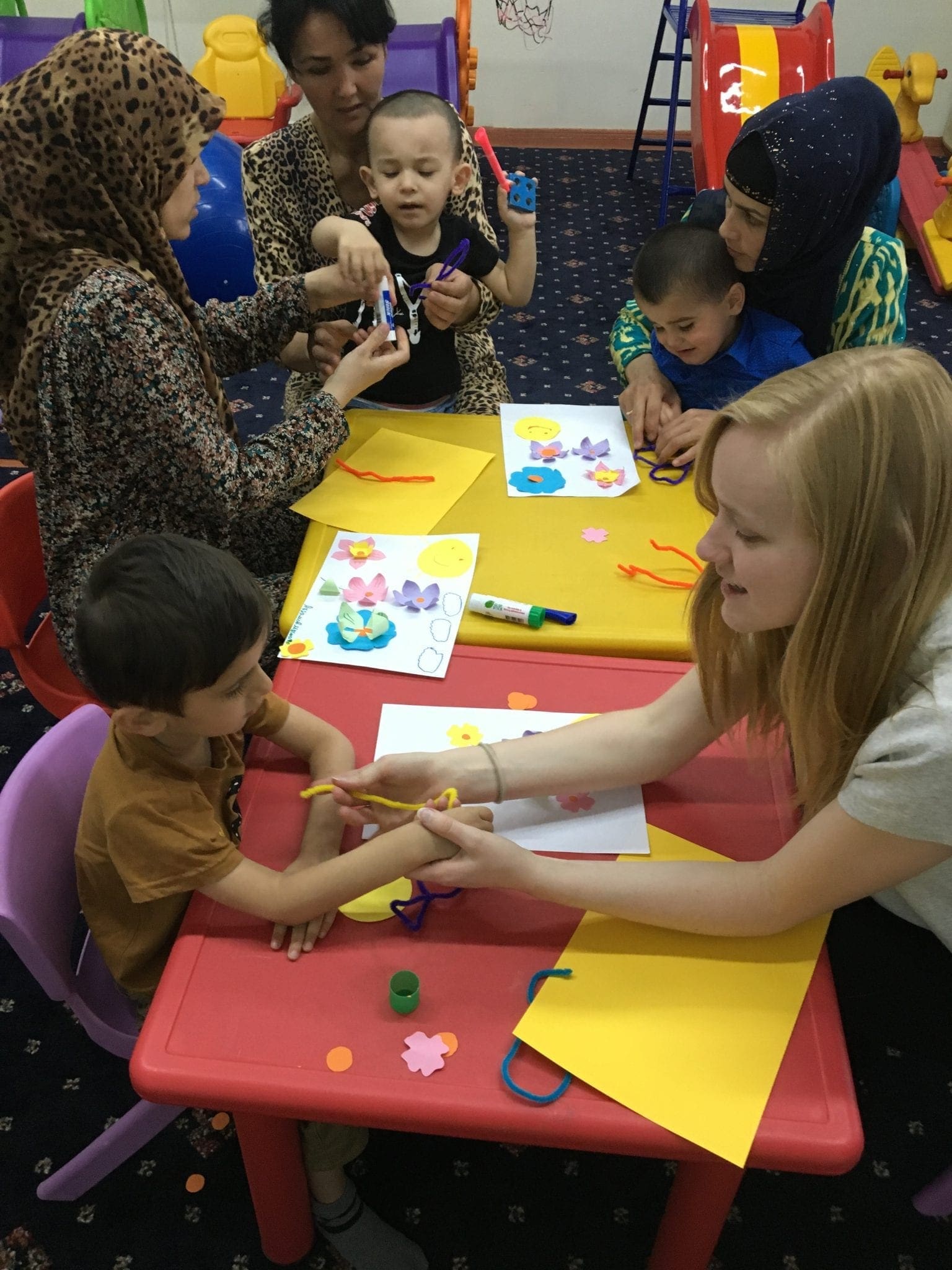 “Catie Carson assists an art therapy session with mothers and children in the Early Education classroom.”

The mothers I have met through IRODA continue to amaze me by their steadfastness and dedication. Caring for the children at IRODA is exhausting. The children are beautiful and endearing, bu can also be challenging to work with. Many of the kids are full of energy, but struggle to maintain attention, so getting them to engage in activities without aggravating each other can be draining. After a couple of hours working with the kids each day, I’m dead tired. Yet these parents are constantly caring for their autistic children enrolled at IRODA, and their other children at home. They also give what they can to help other mothers raise their sons and daughters as well. It is hard work, but they reliably show up, day after day.

Before coming to Tajikistan, I was warned that families of children with autism face heavy stigma in Tajikistan in the absence of widespread understanding and acknowledgement of ASD. Within IRODA however, parents can relate to one another so comfortably that I did not encounter the gravity of this stigma until Aubrey and I spent a day updating IRODA’s website.

One of our ideas was to feature pictures of the mothers with their children. We already had several precious photos of mothers hugging or helping their kids. When we took the photos, the women had smiled and giggled; but as soon as we asked about putting them on the website, the mothers grew uneasy. Sara, one of our Tajik friends who was translating for us, explained that a couple of the mothers did not want photos of them with their children made public, because they were ashamed for people to know that their child had autism. 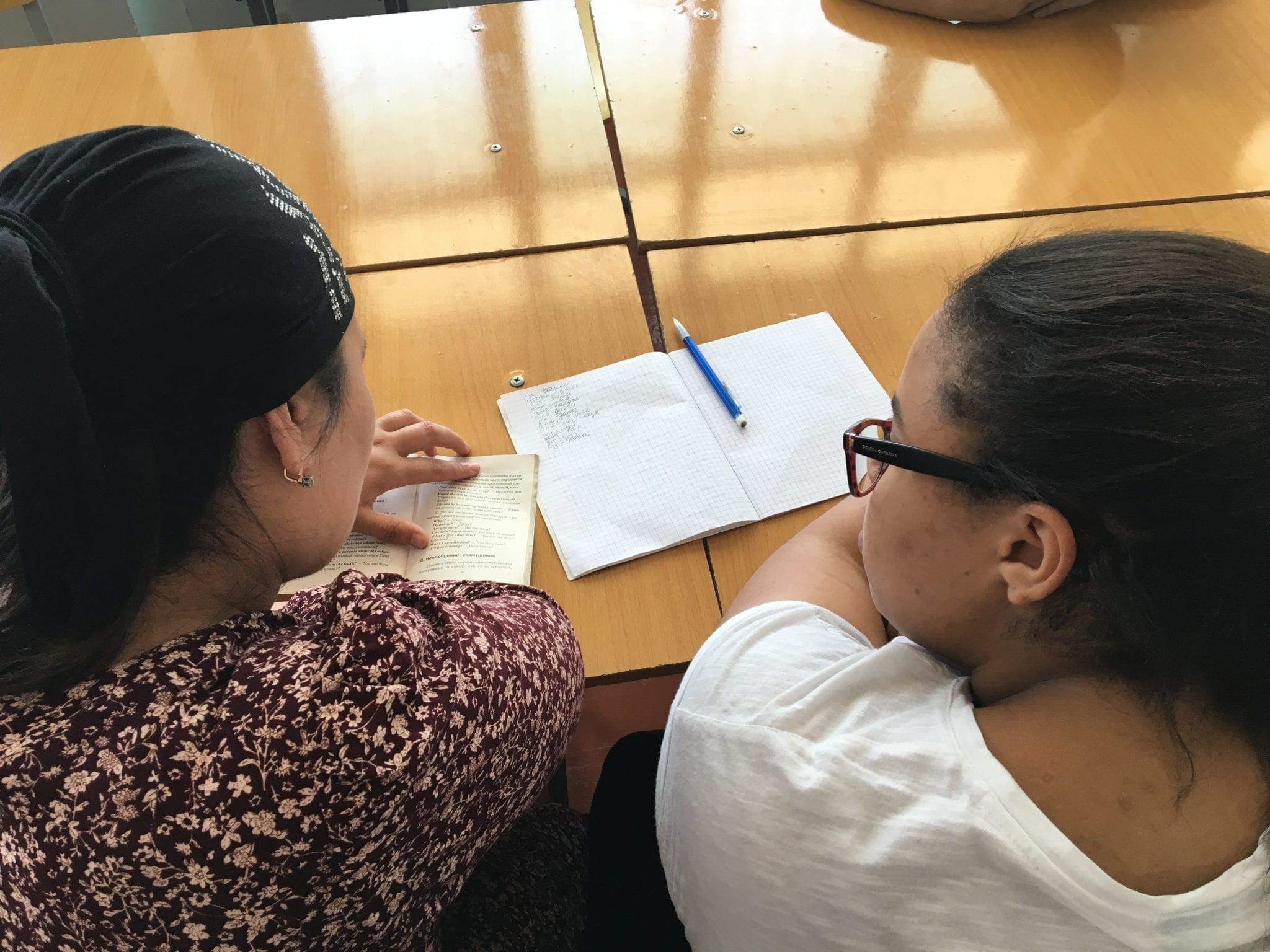 Later, debriefing the day with our in country coordinator, I explained what had happened. “Of course,” he responded, “this is Tajikistan. Here, people think Autism is shameful.”

This is the consequence of ignorance, and the importance of this organization. Founded by parents of children with autism who could find no resources in Tajikistan, IRODA provides care, training, and support. Because of this initiative, these children were not admitted into asylums with schizophrenia diagnoses or left without a place to get an education. Their parents now have a place where they can embrace their children and talk with other parents who know what they are going through; a place where they can relax, smile, and braid each other’s hair.

Catie Carson is a rising junior at Arizona State University, majoring in Psychology. This summer, she is volunteering as one of America’s Unofficial Ambassadors with IRODA, the only Autism Spectrum Disorder advocacy NGO in Tajikistan. Benjamin Orbach, the Founder and Director of America’s Unofficial Ambassadors explains that America’s Unofficial Ambassadors is a citizen diplomacy initiative that is increasing the number of Americans who volunteer in different parts of the Muslim World in areas of human development. Americans like Catie are building people-to-people partnerships that reduce stereotypes and then sharing their experiences when they come home. Over the last four years, our initiative has sent more than 100 Americans to volunteer for short-term service of a week to a year in nine different countries. Many of our unofficial ambassadors are young people like Catie who are making a difference at the community level, abroad and here at home.