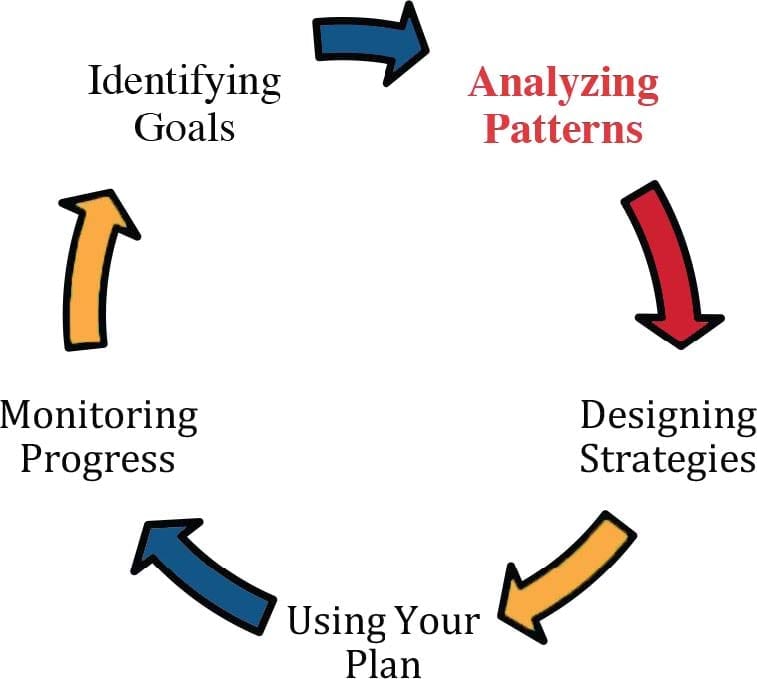 After identifying broad goals and routines you would like to address for your child… and beginning to track specific behaviors that you want to increase and/or decrease, the next step in the positive behavior support process is to determine the patterns that are affecting your child’s behavior.

Specifically, you want to know:

Antecedents: Under what circumstances is your child most and least successful?

Consequences: What does your child get or avoid through positive and problem behavior?

You will want to pay attention to when, where, with whom and during what activities your child’s behavior is at its best and worst. It may be important to notice specific details such as how people interact with your child, what exactly is expected during the routines, and what sounds or sights are occurring. You will also want to know what happens after your child’s behavior – how people react or what other changes occur in the environment. It could be that your child gets attention from other people, avoids or delays unpleasant situations, or gains access to items or activities. Finally, you will need to know about setting events – things that could be influencing your child’s behavior but are not necessarily obvious in the immediate circumstances. Setting events can be related to health (e.g., fatigue, hunger, illness), changes in routines or surroundings, or relationships. Below is a table that summarizes the information that will help you analyze the patterns surrounding your child’s behavior. 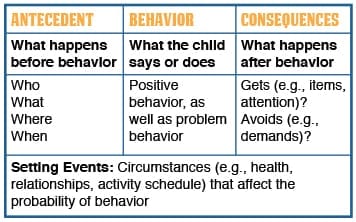 To develop an understanding of the patterns affecting your child’s behavior, it is often helpful to deliberately gather information, acting as a detective and trying to remove any assumptions from the equation. It is important to be as objective as possible during this process. Two strategies to help you with this are: Asking and Watching. Asking means posing specific questions (see above) to the people who know your child best and participate in the routines that are of greatest concern to you. Watching involves stepping back from situations and objectively describing situations as they unfold. It is helpful to record this information as laid out in the chart above as A (antecedents) – B (behaviors) – C (consequences) because it makes finding patterns easier.

Because children’s behavior and motivations tend to vary across circumstances, it is best to focus in on particular routines when trying to understand your child’s behavior patterns. The following video shows a child and parent interacting during homework. See if you can identify what the child does and what is occurring right before and after the child’s behavior, including what the parent does in response:

You probably observed that Jack’s mother was asking him to start an academic assignment and he was not cooperating. The ABCs of this situation could be recorded as:

Antecedents: Mother is sitting a table with an academic task. She tells Jack he will be able to watch Lion King after doing his work. She asks him to write his name. Mom places the pencil in Jack’s hand and guides him to begin writing.

Behaviors: Jack makes high-pitched noise and sits down. He rubs his eyes and puts head down. Jack leaves the table, squeals, and walks to the door. Jack says, “no thank you” and then pushes his mother out the door.

Consequences: His mother folds the paper in half, decreasing the amount of work he needs to do. She rubs his head and back. His mother blocks his exit and asks him “what’s up”. Jack is able to leave the room and delay the task.

In addition, his mother comments that Jack may not be feeling well. That could be a setting event.

Now view this interaction. What exactly do you see and hear?

Notice that the pattern in this video was not the same. In this situation, the parents guided their daughter, Violet, to the table to eat. She continued to leave the table. From what the mother explains, however, it is for a different reason than Jack’s. Violet wanted a treat. Here are the ABCs:

Antecedents: Lunch is on the table. Mother says, “Eat with me?” and guides Violette to the table. When she leaves, Dad brings her back.

Behaviors: Violet leaves the table and runs into the kitchen. She pulls away, drops to the floor, and begins yelling and crying.

Consequences: Dad physically brings her back to the table and guides into seat. (Dad does not give her the treat).

It is also important to note that in the past, Violette’s parents have sometimes “given in” when she has a tantrum by allowing her to have something else to eat.

Once you have gathered information on patterns surrounding your child’s behavior, it is often helpful to summarize the patterns within the routines. The summary should include the antecedents, behaviors, and consequences, as well setting events that might explain why your child’s behavior varies from day to day or across circumstances.

For the above videos, these summary statements could be:

The purpose (or “function”) of Jack’s behavior appears to be to avoid or lessen the demands of his schoolwork. On the other hand, Violet’s behavior may serve a few different purposes – getting her preferred foods, avoiding sitting at the table, and/or gaining attention and physical contact.

Once you understand the patterns surrounding your child’s behavior within the routines you want to address, you are better able to develop strategies that are likely to be the effective. You will be more informed and equipped to bring about the changes in behavior you want and that will benefit your child and family the most. In the next article in this series, you will learn to select and plan strategies for your child to prevent problem behavior and prompt more positive behavior, teach skills to replace problem behaviors and be more successful in routines, and manage consequences to reward positive (and not problem) behavior.

Meme Hieneman, has a Ph.D. in Special Education and is nationally certified as a behavior analyst. She has published a variety of articles, chapters, and books including “Parenting with Positive Behavior Support: A Practical Guide to Resolving Your Child’s Difficult Behavior.” In her professional career, Meme has worked with children with severe behavior problems for more than 25 years.