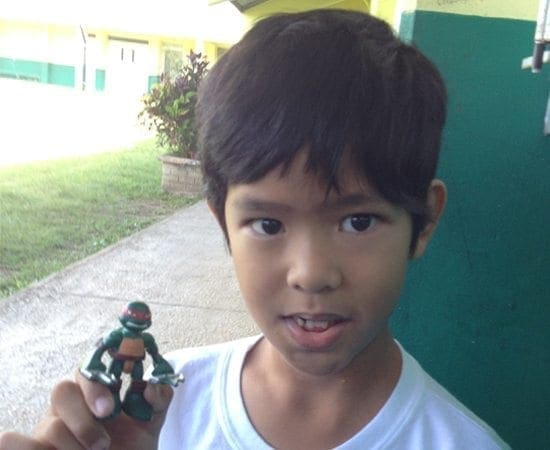 Next I changed the game, which I always do to add variation, and made the hoops into a tunnel that children would crawl through. I sang a song about tunnels and the kids excitedly crawled through. Except Leandro. He refused. His one-on-one aide practically pushed him through the first hoop while Leandro voiced his reluctance but he went through the rest by himself and by the second time go-through, he went by himself. After, with a big proud smile, he came over to me for a high five/fist bump. I was delighted and surprised to see how proud he was of such an easy activity.

And then I changed the game again. To reward him, I put the hoop back to lying on the floor but in a zigzag pattern so players would jump again. Sideways this time. All the kids played the new game.

Except Leandro. He completely and utterly refused. I encouraged. He wouldn’t budge. I let it go, as it was time to end the game anyway.

And then as I was writing up my notes, I got it about him. He was afraid of new things. He was afraid of changes. He felt safer sticking to what he knew. No wonder he was reluctant. He wasn’t sure he could do it the new way.

When the other children were elsewhere, I sat quietly beside him and for his ears only I talked about how much he had learned since he was a baby. It was scary to learn new things but he had done it and now he could walk and run and jump and hop and draw and write. The whole time Leandro sat still and attentive. Then his posture changed and he leaned against me and quietly put his hand on my arm. He’s a terrific kid and I said that too realizing he probably, because of how he was, doesn’t hear that much.

Since the teacher had put out little cups of squash for the children to taste, I took one cup and ate one and offered the other to him, our very reluctant eater. He first tightened his lips and then softly opened his mouth to taste one. I popped one in. He chewed it up. I offered him another. He reached in the cup to pick it up but it was too mushy for him to touch so I got it for him. He ate it and then we went to the table for lunch and he ate a whole hamburger bun with ketchup, hold the meat.

I asked for a kiss when it was time to go and he kissed me softly on the cheek.

I had made a friend and I learned, again, to recognize and respect the fear that’s under the refusal.

Read More: An Easy Way to Engage with Your Child or Student

Barbara Sher is a pediatric occupational therapist and the author of nine books on games that have been published in seven languages. Her latest is Early Intervention Play: Joyful Games for Children with Autistic Spectrum Disorder and Sensory Processing Disorder. Her books can be seen at her website, www.gameslady.com or on any online bookstore.